Like a broken fish-hook adrift in the ocean, even the least-capable social media presence has the possibility of making a big catch.  So has JSVB attracted the attention of Charleson Engineering, a prestigious consultation firm operating out of Winnipeg, Manitoba.  I guess it helps that Mr. Charleson was a childhood friend of mine, too.

I landed the CEL (Charleson Engineering Limited) account, a commission to provide Mr. Charleson's company with a new logo.  Normally, logo work proceeds fairly quickly as I can present most clients with some ideas based on my previous work.  In this case, I was able to do the same thing.

Mr. Charleson was interested in a red logo that incorporated themes of construction and held the values of a family owned and run business.  With my extensive background in non-construction (well, I do have several hundred hours of my lifetime poured into LEGO), and no first-hand knowledge of family businesses, all I was able to provide at first was one big question mark.   I took some of Mr. Charleson's sketches and hashed them out, but they weren't satisfactory.

One trick I have is to play with typefaces.  Sometimes the organization of letters will lead to some sort of combination of shapes on which I might be able to work out a good design. 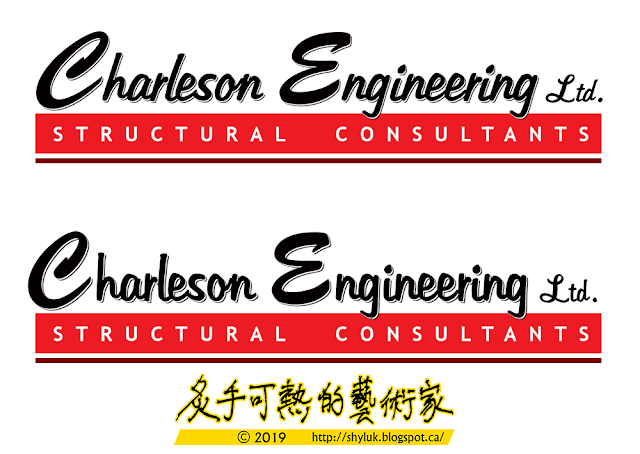 Above are two attempts at using a brush script typeface (called "Brush Script").  I felt that the soft lettering would help make the logo look approachable.  I gave the text a double drop-shadow to make it pop a little.  I quickly learned that italicizing the type was not a good idea, as it made the logo seem unstable - not a good look for my client!

Mr. Charleson was kind, but the logo wasn't good enough.  Especially, it didn't incorporate anything visual to do with construction.  I would try again the next day.