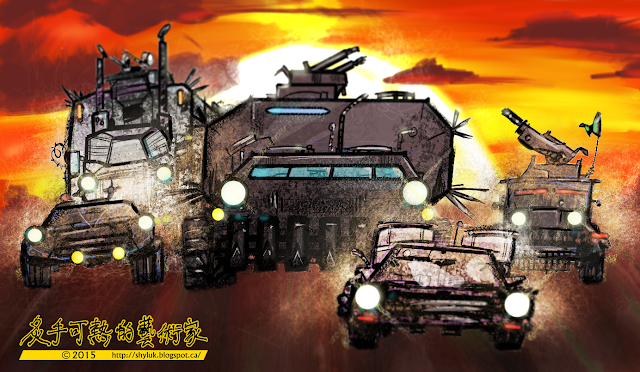 This picture is inspired by the 2015 indie videogame "Convoy", by (wait for it) Convoy Games.   You can probably guess what inspired them. 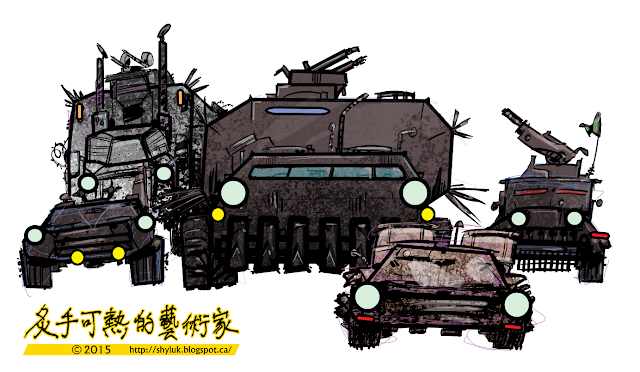 An acquaintance of mine wanted a post-apocalyptic road rage scene.  So far, this is what I've got.  I still need a background, a large boiling sun poured over an alien desert, and I have to throw in some atmospheric perspective to make the vehicles read as separate elements.  That's dust. 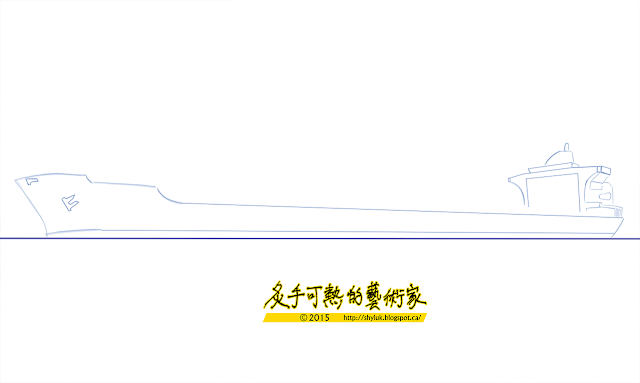 A simple sketch of a freighter.  I like the perspective. 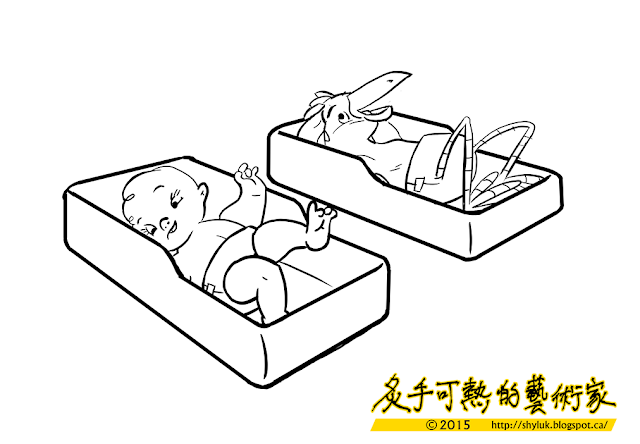 I've inked my sketch of an infant and a baby stork.  Not sure really what a baby stork looks like, though. 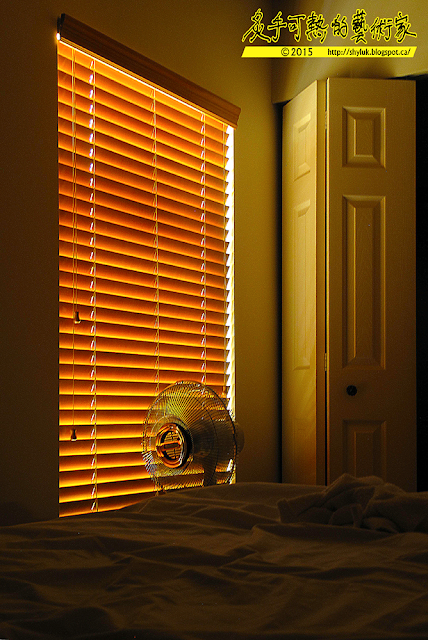 "You have that look on your face again."

"Yeah.  I was thinking of something."

She pouts.  "You know that's not the answer I'm looking for."

His hand is as large as her bare shoulder.  He pulls her close, not caring to be gentle.  Her lips against his remind him of candy.  Even from behind drawn blinds, the morning sun feels like a blast furnace.  The fan buzzes like a beehive.  His fingers curl into her hair as he draws her close.  Her arms enfurl him, her unclad body presses into his.  She is enveloped by his presence, the spice of his sweat, his rough-tanned limbs drawing her into his wished-for position.  She gasps.

Eventually, he and she roll away.  He lights her cigarette.  She breathes in greedily.

"You'll be in Topeka tonight?"

"Yeah.  Then Madison.  That's my line for this week, I gotta fill in for one of the captains called in sick.  Overtime for me."

She stubs out her cigarette.  His hat is on the bedside table, hanging on the edge where it had landed.  She leans over him, unmindful of the bedsheets as they slip.  She puts his hat on her heat.  It's three sizes too big for her.

The fan blades correlate to an engine in his mind.  He's already halfway to Topeka.

"Make me an omelette?"  He looks forward to fried onions in his buttered eggs. I'm working out infant versions of my stork and baby design. 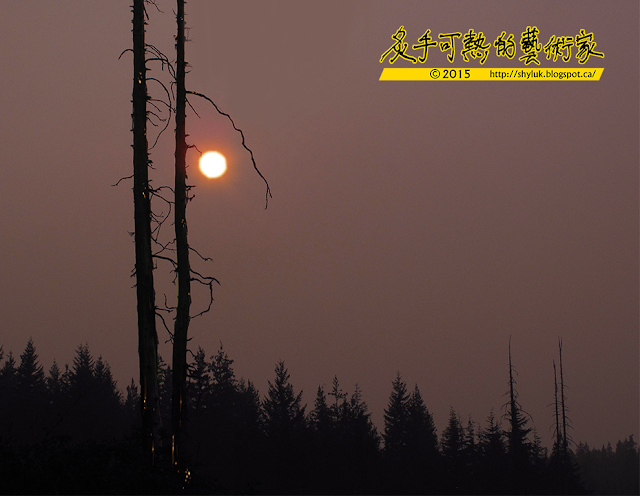 Here's another photograph I took of the Pemberton fire.
Destroying a large chunk of my credibility as a photographer, I did fake a few things in this photo to make it read as more dramatic.  The original picture did have an orange sun, chocoloate-coloured clouds, and the dead trees in the foreground.
I enlarged the sun, added some heat shimmer, and drew in the burning embers by hand.  Maybe the two trees died of fire, more likely they died of disease.  I wasn't particularly interested in getting closer to the Pemberton fire than I already was, so I figured I'd fudge the picture with a little creative post-production.
This JSVB Entry is by Jeff Shyluk at 9:15 PM

How I Spent My Summer Vacation
By: Jeff

How I spent my summer vacation was to go up to Whistler while it was on fire.

My friends Earl and Sylvia wanted to go on a nice summer vacation.  My wife and I kindly suggested Whistler, so that we could visit together.  "We want to go somewhere we've never been before," they told us, their kind words yet stinging with unspoken rebuff.  Well, it wasn't our fault they've been to British Columbia before.  Earl and Sylvia went to Costa Rica (shades of Jurassic Park!), while my wife and I cheaped out by going to Whistler anyways, borrowing another friend's time-share condo for a week.

How did the vacations compare?

The time-share condo was nowhere near any forest fires which were north of Pemberton, maybe fifty kilometers away.   However, the smoke came down in a foul, thick layer that blocked out the sun.

Comparison: the Air Quality Index of Beijing last week was 120, while the AQI of Whistler was 160.  A good AQI is 50. Anything above that is considered polluted.

So, with everything clouded in smoke and ash we forewent strenuous outdoor exercise.  Whistler has excellent hiking and cycling trails; we sampled neither.  Mostly, we hung out in bars where paradoxically the air was much cleaner.  Since the smoke drove away all but the tourists from Beijing, most of Whistler's facilities were very much underutilized.

The best part of the vacation was the cheese.  We bought regular cheese at the market and left it out overnight on the balcony.  The next day we had smoked cheddar!

Below is another photo of Whistler Olympic Plaza.  It's courtesy of the Whistler Tourist Board, and was taken very close to the same vantage point as the picture above, obviously on a different day, though: 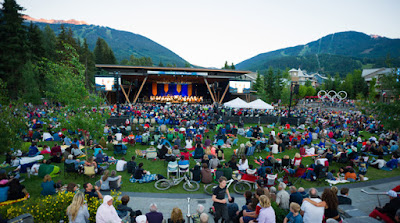 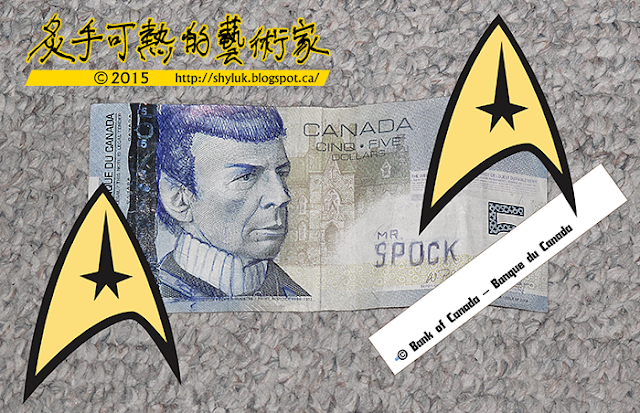 For years, artistic Canadians have been drawing Star Trek character Mr. Spock over Prime Minister Laurier on our five-dollar bill.  When the actor who played Spock passed away, there were hundreds if not thousands of these things in circulation.

The Bank Of Canada has ruled that drawing Spock over Laurier does not break any Canadian law.  They do consider doing so unpatriotic, however.  Ouch, Harper Government, ouch.

Electronically duplicating currency does break the law, so I've blocked out enough of the bill to stay legal and I've kept it from being flat (not to mention keeping the obverse side hidden, although on that side I did draw the Enterprise fighting off a Borg cube filled with scantily-clad space vixens; it's pretty wicked, but oh well, the law is the law).

Here is an old-timey photo from my friend Earl's blog.  He wants to get rid of the blue artefact, likely from light that got into the camera which pre-exposed the film or a problem with the film stock.  Since the portion on the right is more or less colour-correct, factoring in the age of the picture, why can't we take the info from the right and use it to correct the left?

That's what the Photoshop histogram is for.  The histogram is a series of curved graphs that show you the number of coloured pixels in your picture.  The distribution of a balanced picture should be something like a bell curve.

I took what I thought was a representative portion of the picture and had Photoshop generate the histogram, the little tiny coloured graph: 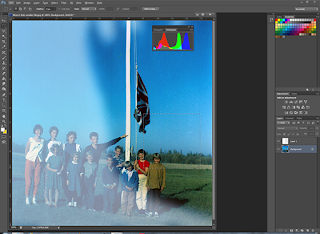 The white ghosty part was the mask I created to form an adjustment layer.  Everything under the white would get its histogram shifted to look the like histogram on the right.  Match the histograms, and the left side of the picture should in theory match up with the right, right?

Well, it was fairly close, but too reddish.  Likely my sample wasn't properly representative of the rest of the picture.  However, matching the histogram curves did set me on a good path to correcting  this photo. 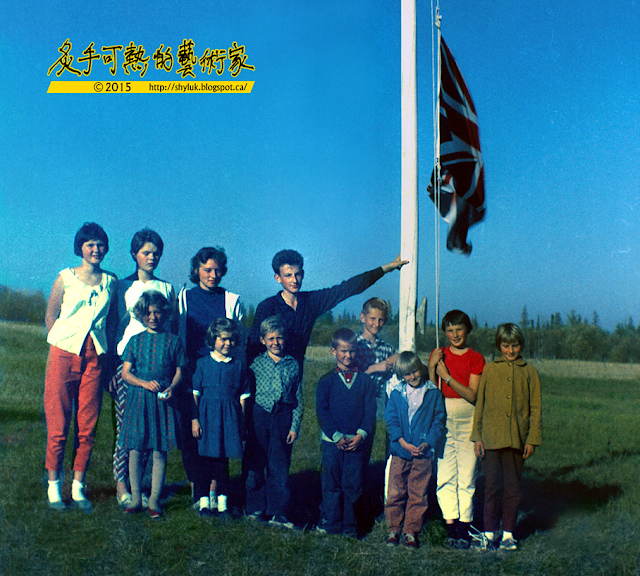 Here's the final result.  Most of the colour shift has been evened.  There were a couple of places where my mask missed matching the picture, resulting in blotches.  Instead of fixing them, I simply cropped them out, since the picture probably should have been cropped in the first place.