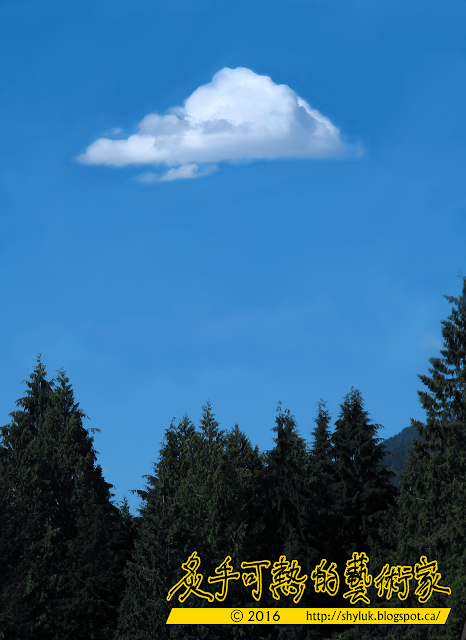 This was the view out my front door today: a cerulean blue sky and a single white puffy cloud.  What a ridiculous cloud.  It looks exactly like the sort of cloud I was taught to draw when making cartoon animation.

So, I suspect it's really flying saucer aliens hiding behind a holographic image of a cloud, the first logical screen they could produce in a hurry when they saw me coming out the front door and they scanned my tinfoil-hatless brain for images.  If so, my loyal JSVB readers will no doubt see the UFO where I just see an improbably generic cloud.

Email ThisBlogThis!Share to TwitterShare to FacebookShare to Pinterest
Categories: Jeff's Life (As We Know It), Precious Photos 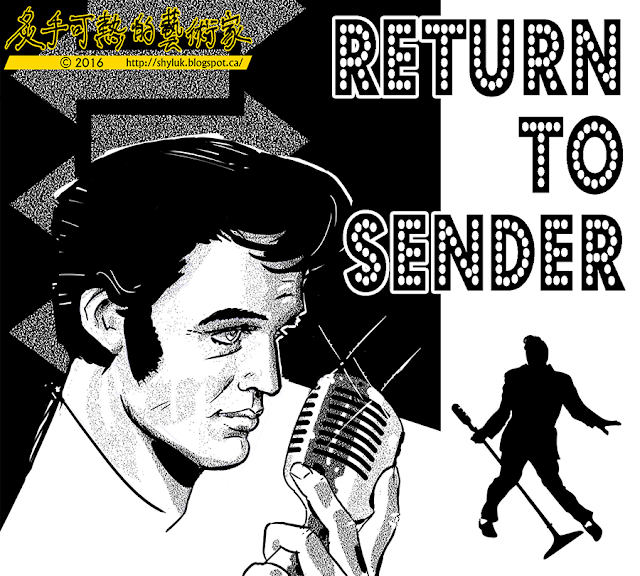 There was an error which had me receiving two of an item from an Internet vendor when I only wanted the one.  The product also arrived months late.  As it happened, the second copy showed up as I was working on my Elvis sketch, so I decided to co-opt The King into a nice Return To Sender label.  This is the illustration for today's JSVB Post.

As it happens, the vendor doesn't want the second dingus back, so I won't get to use the label.  However, I do get to chalk up another JSVB Post, so everything works out in the end.

I have a couple of other Elvis-themed bits of mail on JSVB:  if you click here,  you can see them.

A cowboy in the rain.

Email ThisBlogThis!Share to TwitterShare to FacebookShare to Pinterest
Categories: Jeff's Life (As We Know It), Metro Vancouver, Sketchbook 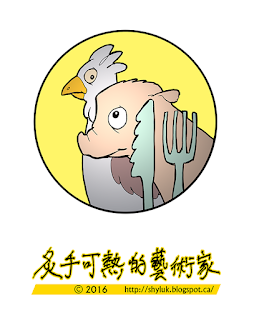 This badge makes me think of barbecue! 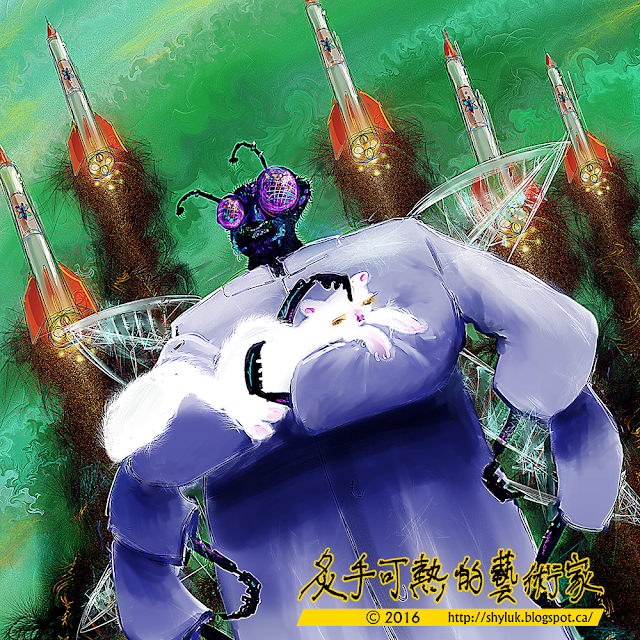 "I have been so very much looking forward to this moment, double-oh seven.  Everything that has happened to you has been in the dispensation of bringing you to me, so that I may now ultimately defeat you.  Without the tiresome meddling of the British Secret Service, I shall be free to pursue my goal of world domination!"

"Before you kill me, at least tell me your name."

"You have earned this much, Mr. Bond.  My name... is Ernst Stavro Blofly."

A huge black housefly has taken up residence at our address.  It refuses to be trapped and evicted, let alone smashed.  It is fast, and for a fly it is extremely cunning.  It rests close to refuge and boldly claims the downstairs territory for itself when it is fully alert.  It avoids windows and is much faster than we can move.  It has the reflexes of lightning and the speed of thunder.

I have taken to calling it Ernst Stavro Blofly, a loose tribute to Ian Fleming's infamous Bond villain.  For the past three days, it has been my nemesis.

Loyal JSVB readers will recall another nemesis, the inimitable Mousey Tongue (please click here to see JSVB Post #206), who likewise avoided traps for three days.  I've pit my will against a mouse and eventually won; I'll throw the dice once again to defeat Blofly.   If only I could get Shirley Bassey to sing the theme song... 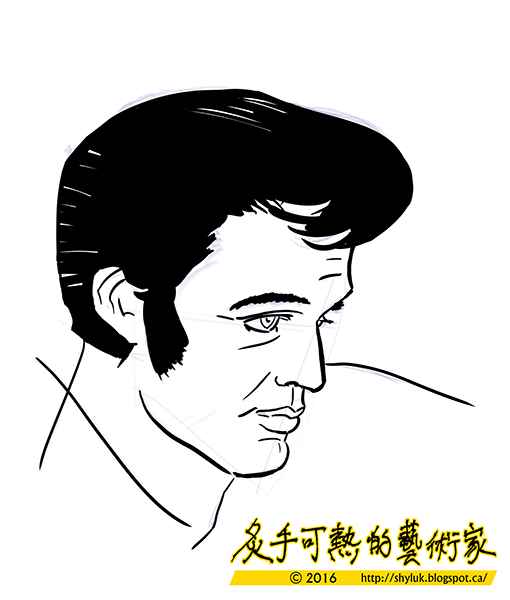 I've  inked my Elvis illustration.  I flipped the image because I could not decide which way The King should face. 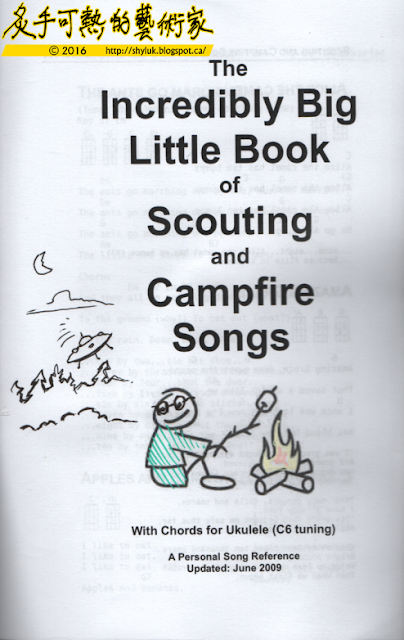 I'm taking ukulele lessons in a group.  I feel there hasn't been enough whiskey distilled in the world for me to endure this, but lifelong learning is a journey.

As part of the course, you can buy for a very reasonable price an incredibly big little book of songs suitable for the instrument.  The instructor insisted that we students personalize the cover so that we don't get our books mixed up.  I decided to colour in the little character provided, add eyeglasses for ease of identification, and then for effect I threw in an ominous flying saucer in the background ready to pluck the hapless camper from his sanctuary of wilderness isolation.  What goes up likely will not come down, ever.

Nobody's noticed I've been using this book for a month now, and only today my wife saw it and laughed her trademark sultry laugh.  That indicated this piece is a good choice for Ungood Art Day, traditionally the thirteenth of every month on JSVB.

A sketchbook version of Elvis Presley in his younger days.  I worked from an old album cover of his.  It turns out that Elvis has a number of album covers with big pictures of himself on the front. 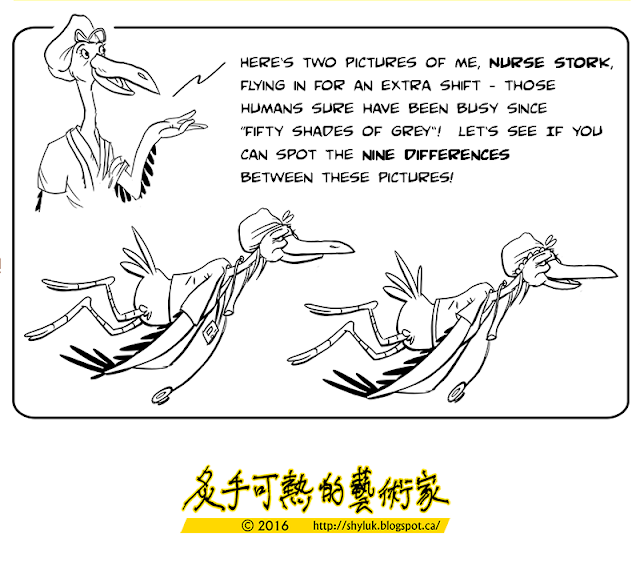 I've incorporated Nurse Stork into a simple visual puzzle.  It was fun to draw!
By the way, here are the answers to my previous puzzle, the Letter Sorter, which you can find by clicking here.  The words unscramble to MOM, TOT, BED, HAT, GIRL, ILL, TOE, COT, OCCIPITOBREGMATIC.  What the White Cat said when she joined the Task Force: HELLO, COMMITTEE!
I did have one person figure that one out.
"Occipitobregmatic" is not an easy word to unscramble.  Since the puzzle was part of an April Fool's joke, I didn't mind adding that word into the matrix.  "Occipitobregmatic" refers to the distance measured between the chin and the top of the skull, which is a useful diagnostic rule to gauge the health and development of infants. It's also a really long word, which is helpful when designing cruel, funny puzzles.
This JSVB Entry is by Jeff Shyluk at 12:02 PM 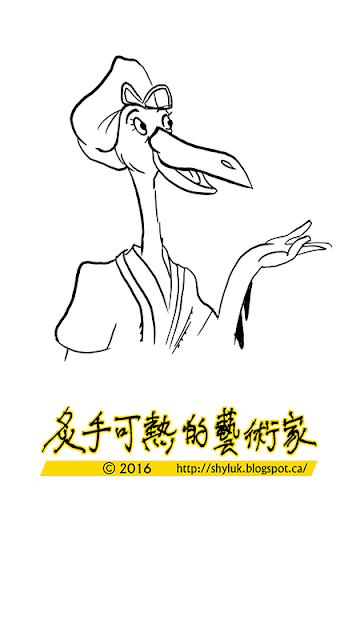 A re-posed drawing of the Nurse Stork character I drew a while back. 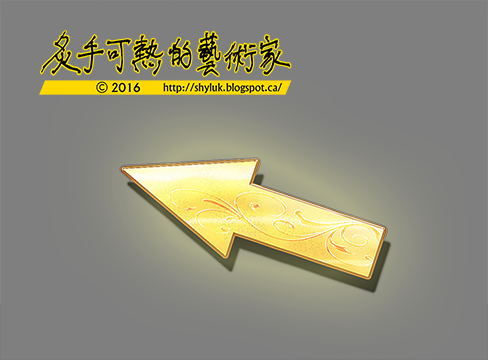 Today, I needed to draw a snark arrow.  I'm replying to somebody online that has no clue what they are talking about, and I produced a graphic that calls attention to their fallacy.  I'll lose karma by making a big obvious arrow to indicate their gaffe, but my point would be made with style.

I looked online for nice arrows, and there are quite a few.  But I wanted this arrow to be personal and beautiful, so I opened Photoshop and built my own.  I think this arrow uses nearly every Blending Option that Photoshop has.  Certainly it uses an unholy amount of blending and more Adjustment Layers than I would use in a month.