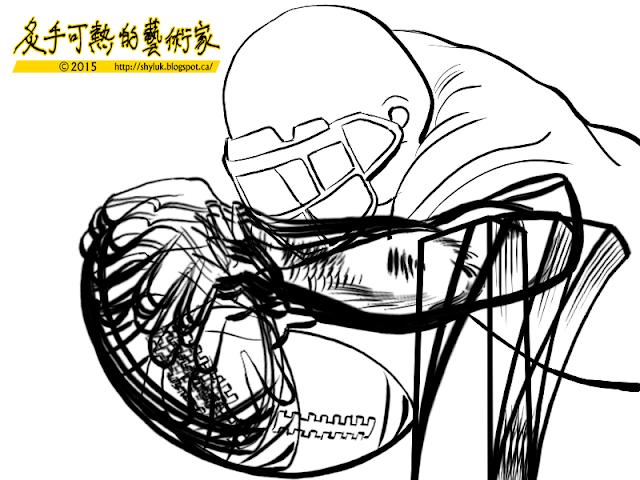 This touchdown action sketch is really just the use of Photoshop to explore the range of motion for a quick scene.  The layers multiplied give a sense of the action but also shows some of the limitations of my composition.  I hope to fix all of that, but I'm spending more time wrestling with software than drawing.

Another day, another flag demo.  This one has better animation, since I took the trouble to look at a  flag model for a while.

Oh boy, I am animating again.  This is my first attempt in years, and am I ever rusty.  However, it's just a simple ruff, I can fix it later.  Right now, I'm more concerned that I can post anything.  Blogger isn't very helpful at helping me figure out the workflow of presenting full motion.  For example, I drew this in high definition, but it sure doesn't show.  However, there's lots of help online.  I'll figure it out, but in the meantime JSVB readers will endure subpar art.

If you are offended by crass, juvenile humour and partial male nudity, don't scroll down. 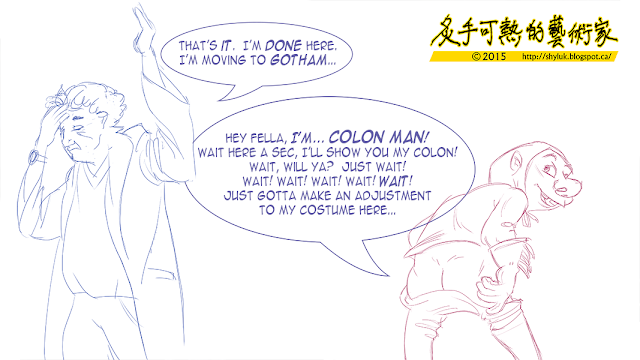 Today is the thirteenth of the month, which traditionally is Ungood Art Day on JSVB.  On Ungood Art Day, I do what most artists don't and post work of mine that somewhere along the line stopped being any good and became for lack of a better term "ungood".

Today is an Ungood Art rarity: I'm posting two in one day.  Normally, I would save some Unggod Art for next month, but seeing as Colon Man is directly related to Period Woman, I chose to post them together.

Does this make sense?  if not, then please click here, here, and here in exactly that order to see more and understand just what Colon Man is trying to do.

If you are offended by sexist, crass, ignorant humour, don't scroll down.

If you take today's JSVB Ungood Art out of context, it would likely be more offensive than funny.  So, what's the context?

1) Today is Ungood Art Day on JSVB, which is the thirteenth of every month: I use this day to showcase artwork that I have worked on that just did not turn out to be any good.  As it happens, today I have not one but two pieces of Ungood Art to present.

2) This piece is part of a series, beginning with "Interrobangman" and "The Human Ampersand", which you can see by clicking here and here. I insist you should do so, because otherwise "Period Woman" won't make much sense.

3) When I work, I find I get around four hours of solid creativity a day.  Normally, the small to medium pieces I create on JSVB take around four hours to render.  So, if I am working on a larger project all day long, say eight hours, I have four strong hours and four lax hours.  During those lax hours, I tend to work on parts of an art piece that don't require strong concentration, like basic colouring or simple lines.   It's called monkey-work.  When I do this stuff, my mind will wander.  In the case of Interrobangman, my mind wandered to think up punctuation-based superheroes that might co-exist within his universe.  Immediately, Period Woman sprang into mind.  I mean, she's funny because she's as obsessed with punctuation as Interrobangman, but her name also leads to a double-entendre.   Right after that came Colon Man, which I will present next JSVB Post.  I realized that neither of these superheroes were very decent, so I eventually thought up The Human Ampersand, who is cleaner and who follows Interrobangman's joke more closely, and I drew him next.

So, without further ado: Period Woman. 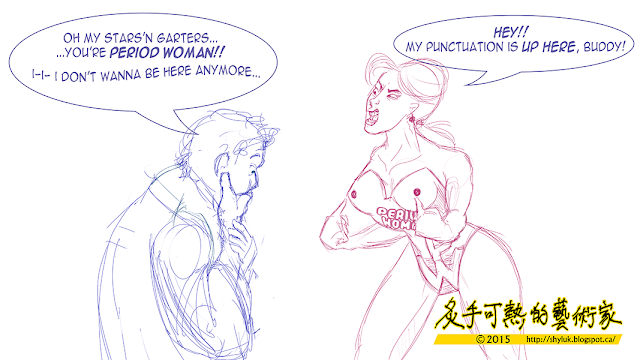 Today was Pirate Pak Day at our local White Spot Restaurant.  On Pirate Pak Day, you can eat adult burger items served in the childrens' Pirate Pak boat, which is a fold-out cardboard pirate ship featuring cute, cartoony White Spot characters.  Two dollars per Pirate Pak were donated to the Zajac Ranch For Kids, which is a charity-run summer medical camp for children with debilitating conditions.

Considering that the lineup to get into the restaurant was a couple of hours for the same food that you'd get any other day, but of course wrapped in a personal pirate ship, I think that the event was likely a grand success.

Since my wife and I never lived in British Columbia as children, we never had a Pirate Pak before. Today was our first.  Despite that the restaurant was packed, service was brisk.  We were seated at a roomy table with enough allowance to properly evolve the naval engagement that should occur when two Pirate Paks meet at sea.

HMS White Spot, my flagship, was granted the weather gage, which allowed me to cross my wife's bows and slaughter her decks with a withering raking fire.  The table edge, however, blocked my tack, and the White Spot was forced to wear away, enduring a serious luff in her sails.  The HMS Triple-O, her flag, brought her helm over smartly and returned brisk fire on the rise: my mainmast was shattered.   We hammered at each other with cannon shot at range, when my wife wisely followed Nelson's dictum and closed for boarding without maneuvers.  Her Triple O's were ready for close combat, my men were shocked by their ferocity.  We struck our colours and surrendered before the ship was sunk, my first loss of Pirate Pak command.

Email ThisBlogThis!Share to TwitterShare to FacebookShare to Pinterest
Categories: Good Food, Jeff's Life (As We Know It), Metro Vancouver 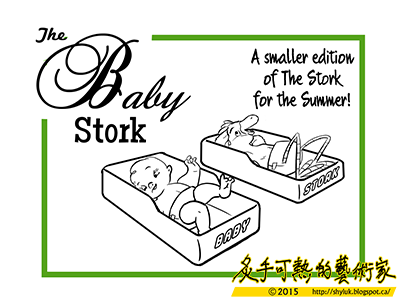 Instead of presenting the next punctuation-based superhero, I got distracted - happens easily enough - and instead I tweaked the baby stork from a few JSVB Posts ago.  I made the little guy marginally cuter and put him in a nameplate.

I'll post my superhero sketches on Ungood Art Day, because as far as they go they are massively stupid and I need something to post on the 13th anyways. 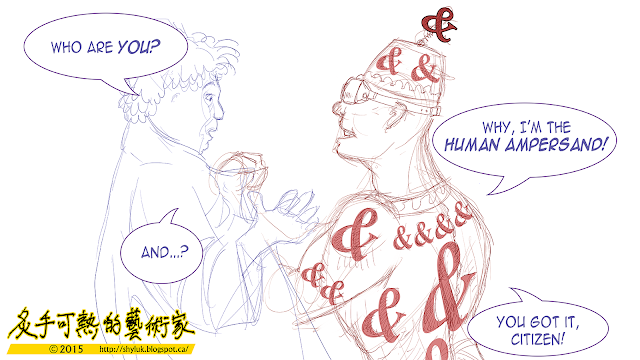 Following the critical success (read: nobody crossed the street yesterday to go out of their way to kick me) of the previous JSVB Post "Interrobangman", I decided to sketch some related ideas.  I found that I couldn't draw Interrobangman without imagining other punctuation-based superheroes.

A quick search of the Internet shows that there are indeed a few grammar hero cartoons out there.  They seem to lack irony, though.  If you don't get enough irony in your diet, you grow apathetic and the next thing you know you're voting for incumbents in the next election.

The Human Ampersand shares pretty much the same joke as Interrobangman, so I declined the opportunity to render this picture past a sketch: you get the idea.   I've got a couple more sketches I'll share in the near future, so stay tuned, dear JSVB readers - same ampersand page, same ampersand channel!

You can click this link to see Interrobangman, in case you have no idea what I'm talking about. 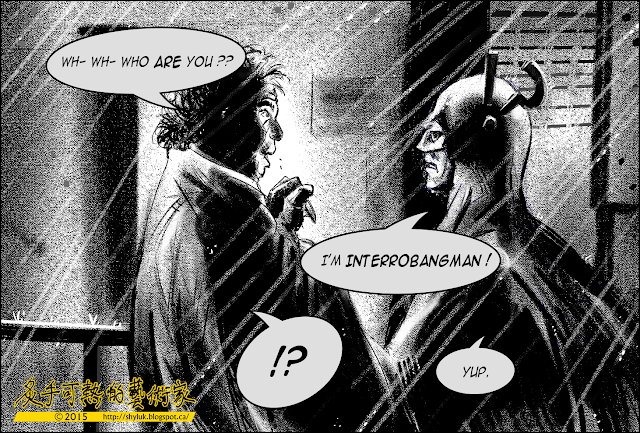 My friend Earl is a big fan of the interrobang (!? or ?!, an unorthodox punctuation mark to express a combination shock and query).  Or at least so he claimed in his blog over a year ago.

It took me all that time to think up Interrobangman, the first and last punctuative superhero.