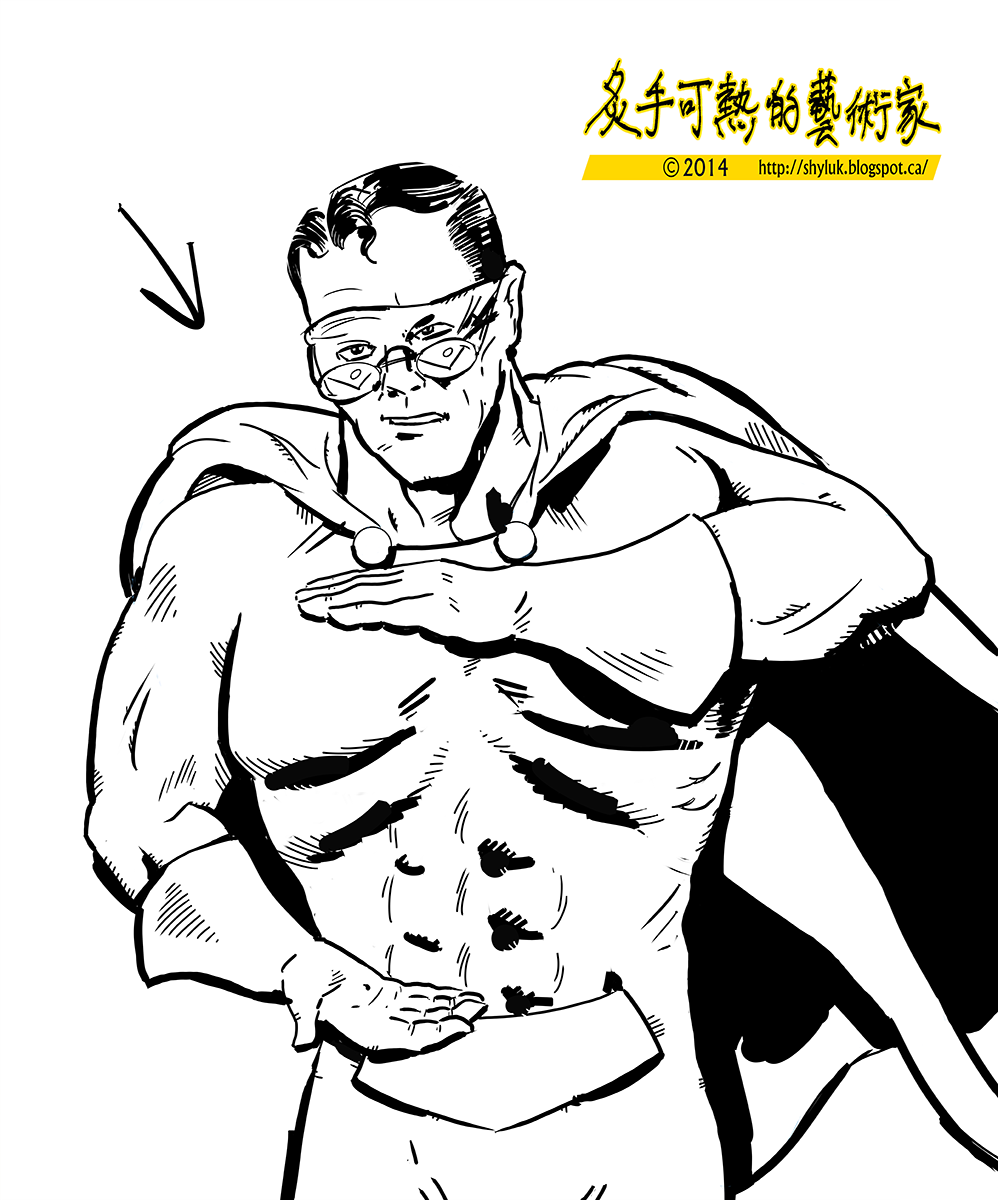 I finally got around to inking my super self-portrait.  I have to draw a few more elements in so that the clunky pose makes sense!  Also: colour and some silver-age post-processing are on tap.  The inking process was like pulling teeth this time: a lot of cringing and pain.

Oh yes, the arrow.  I often draw an arrow or a light bulb to indicate a light source.  Usually, I am not fussy about three-dimensional light, so the source comes from the edge of the page.  If the light comes from in behind or in front of the subject, then I will draw a three-dimensional bulb or icon as a reminder.  If I don't place a light source marker, I'll quickly forget where the light is supposed to be coming from and draw conflicting shadows. 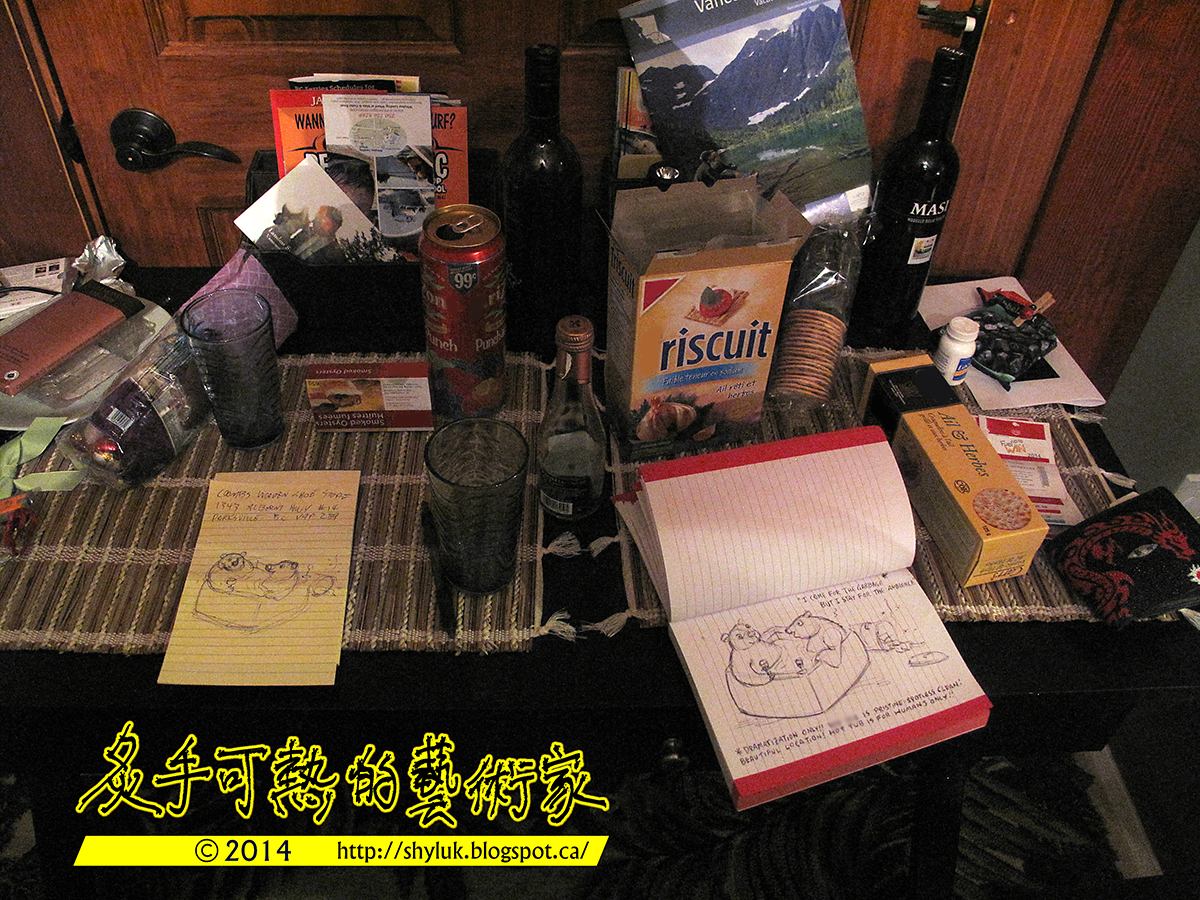 Everywhere I go, I generate a mess.  I consider it the price of being creative, the need to have everything possible within fingertip reach.  Although this picture was taken on vacation, you can see the things I like to have on hand to make my work go well.  There is no way I would ever survive in the corporate world of cubicles.


I sketched this cartoon in the guest book of the jacuzzi bed-and-breakfast my wife and I stayed at for a weekend away from work.  We will know if the owners have a sense of humour or not if we return and there's a "NO CARTOONISTS" sign tacked to the door with a picture of Gary Larson running for his life from a hotelier brandishing a shotgun. 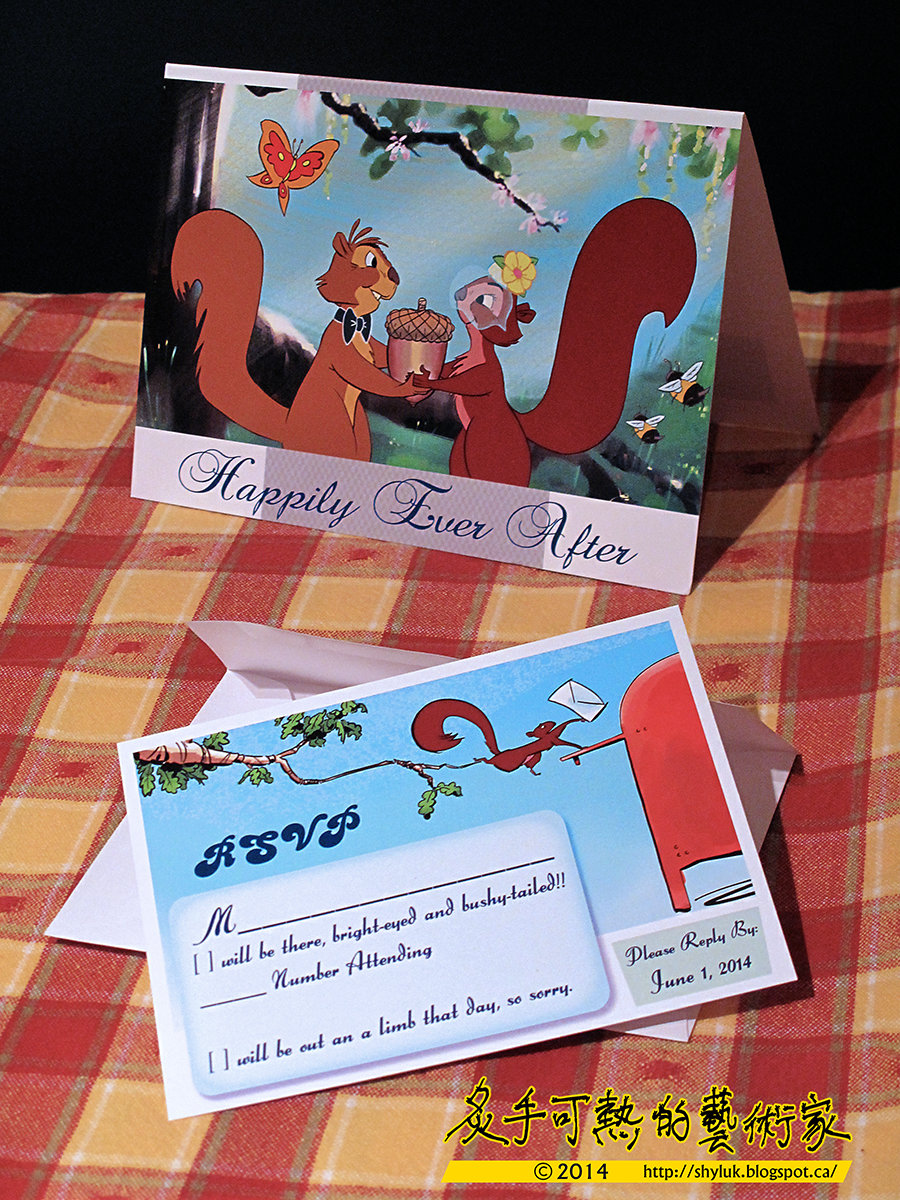 Here is the final run of the squirrel art I made a couple of weeks ago.  I've adapted the artwork into custom-made wedding invitations.  On a per-unit basis including creating the design, my cards come out to around $2.00 apiece to produce, including the card, RSVP, and envelopes for both.  I've avoided the really fancy art paper and craftwork cutouts that can have these cards cost upwards of $5.00 per unit, and my own markup is modest.

Even so, I was able to incorporate the wedding colours as custom options, and the squirrel characters look like cute animal animated versions of the real wedding couple.  That's something that most designers just won't be able or willing to do.

Custom art cards are something you can consider from JSVB.  The prices aren't far from what you would pay retail for cards that come from the factory.  Yet these cards are completely designed to your requirements and specifications: nothing generic!  Kind of exciting, huh?

Here are some other print items I have on display on JSVB:

Here is one of my better art pieces in a frame:  to see it, please click here. 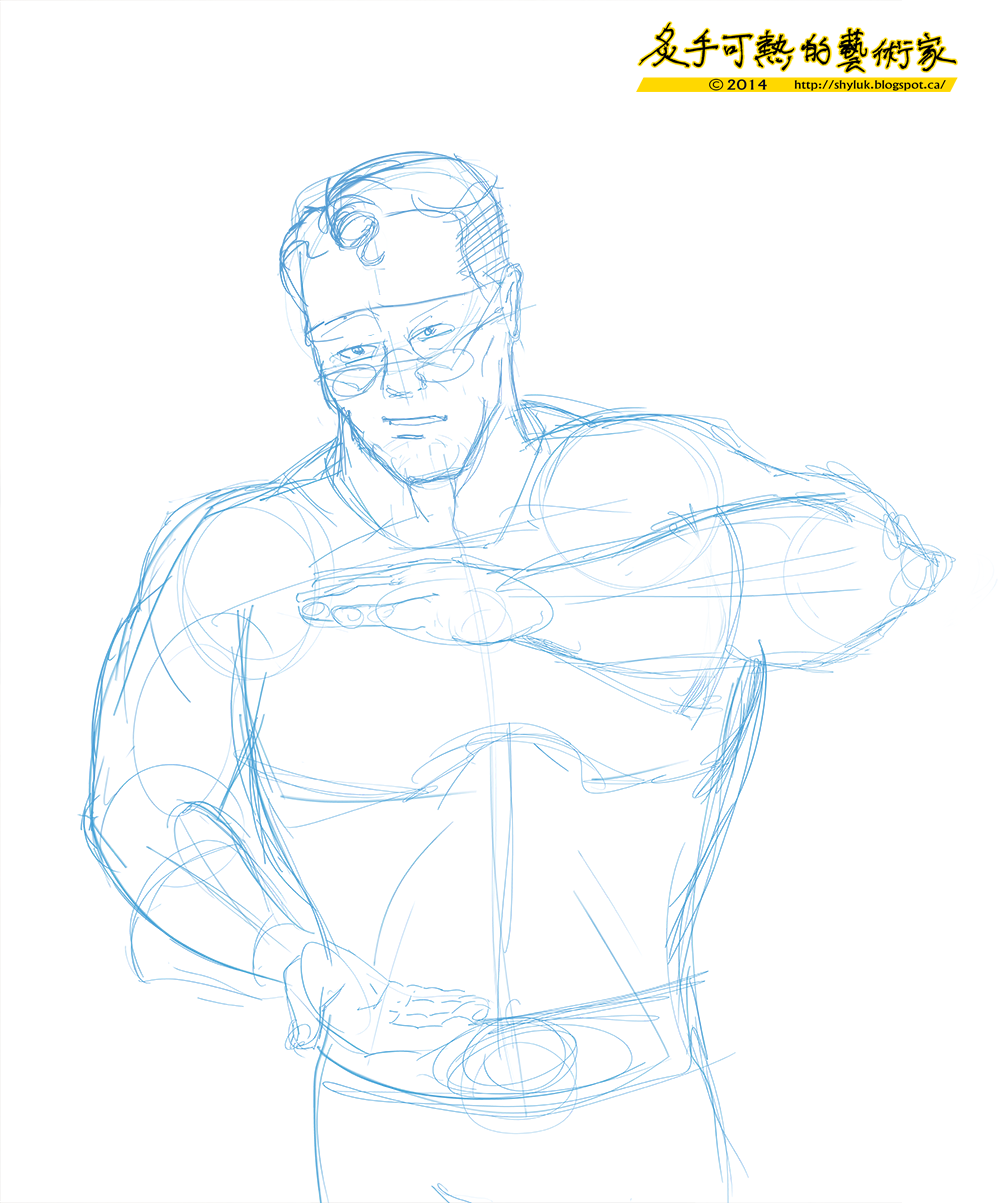 Is it fun to draw yourself as a superhero?  You bet your Excelsior! it is!  But it's a fair amount of work, and the only one likely to be amused is just me.

Despite my only tangential appreciation for the superhero genre, I did take a couple of stabs at this topic before on JSVB:

"Were you up to see the lunar eclipse?"

"Yeah, but it was too cloudy to see anything."

"Well, yes.  I got to go out to check on the moon.  Of course, I couldn't see it.  But when I was out, I found a woman who was outside stuck in her wheelchair.  It was one of those we have that has the brake in the handle so there has to be someone behind the chair to push it and make it move.  The woman couldn't get out of the chair, and she couldn't release the brake."

"She had been outside for an hour.  She was supposed to be picked up by [local bus service for people with disabilities], but apparently they just left her there.  It's a good thing I came out to look for that moon."

"I'll say.  Not great for us, but definitely good for her."

"I found Security and they looked after her.  They found a cab for her and got her home that way.  The next day, the two Security and the woman both promised to call [local bus service for people with disabilities] and give them real hell." 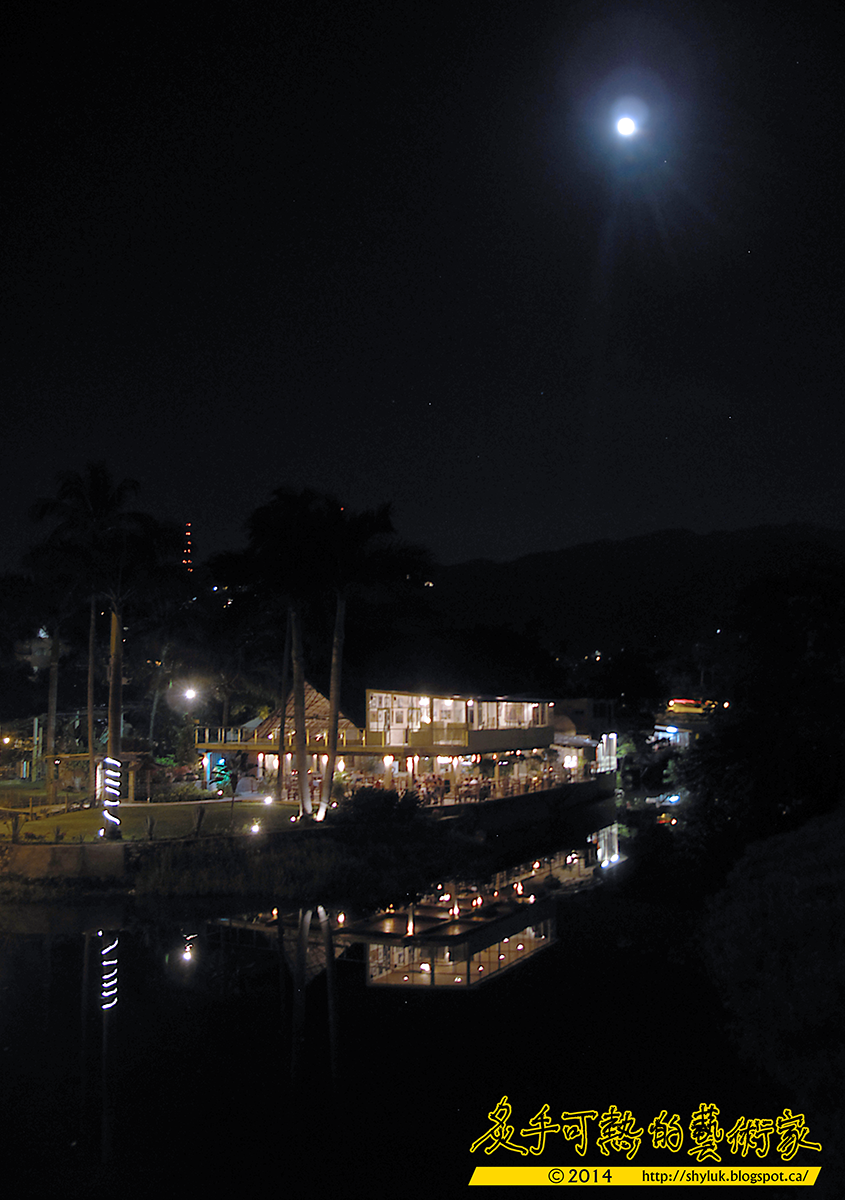 Seeing as I am trotting out vacation pictures on JSVB, I thought this one was memorable.
It's an oceanside night market.  The full moon is shining in the pitch-dark sky like the fiery pin of pure light from an arc welder.  On the ground level, we noisy rambunctious revellers are drunk with the intoxicating spirit of the warm, clear night.  Tequila, too.  Somehow, I was steady enough to snap this photo without dropping the camera into the licorice-coloured waters of the bay.
﻿
This JSVB Entry is by Jeff Shyluk at 11:04 PM 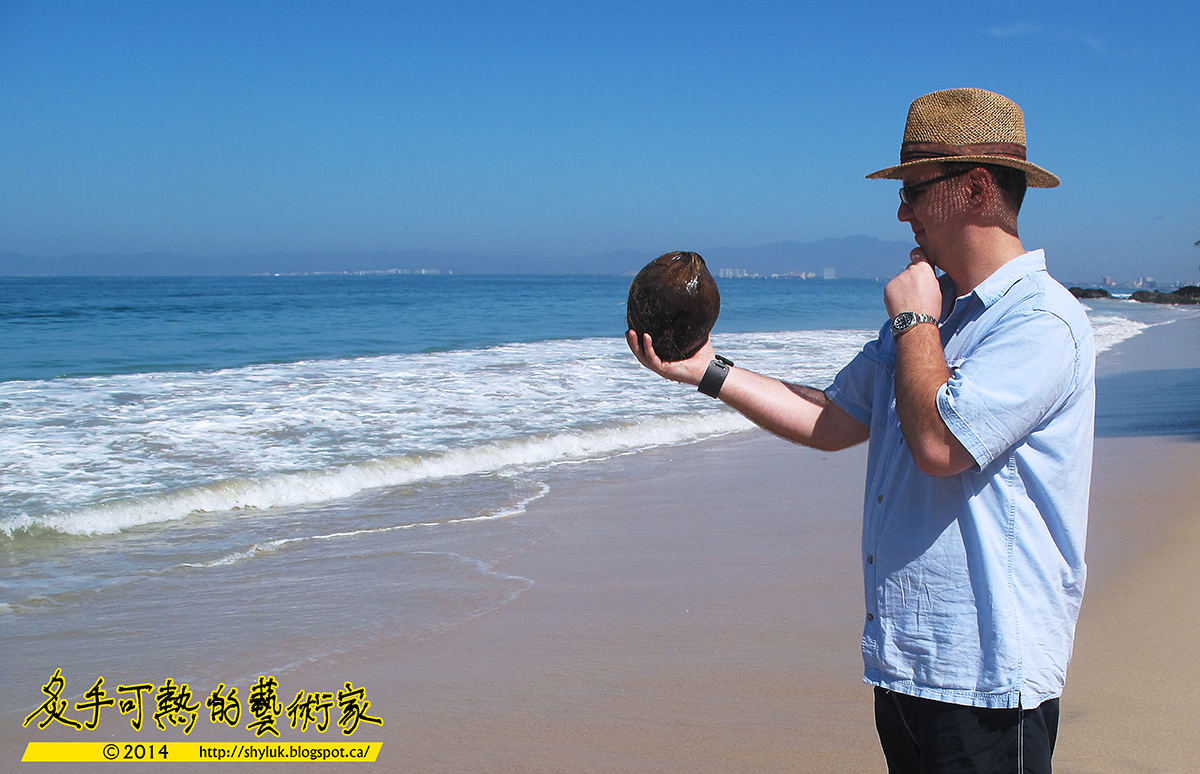 The thirteenth of every month is by tradition Ungood Art Day here on JSVB.  I post something of mine that just isn't very good, and possibly you are amused.

This past month was heavy on squirrels and cowboys.  Strangely, I didn't generate all that many misfires.  I'm going to revert back to an old vacation photo where I rescue a coconut from the surf and re-enact Hamlet on the beach (my wife took the picture).  The photo isn't so bad, but my acting is most Ungood. 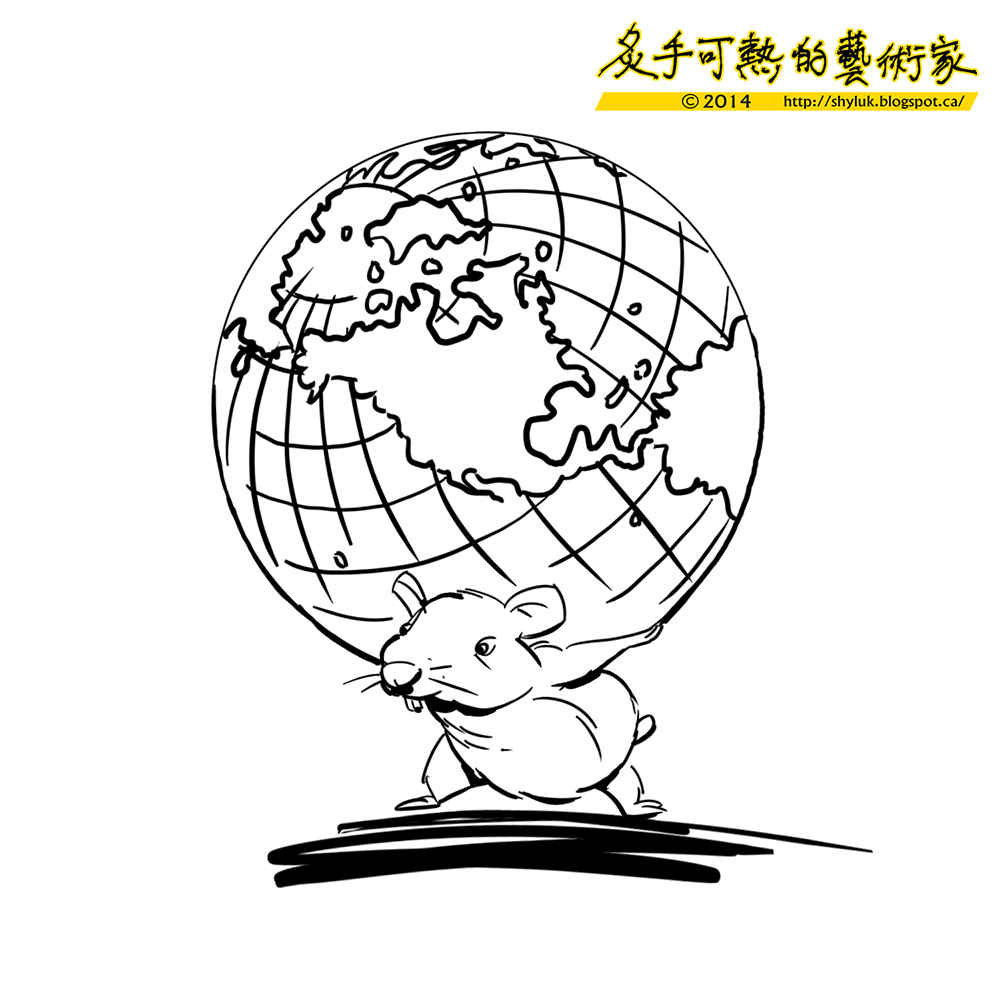 What!? World Hamster Day has rolled around... again?  It seems like just last year we were celebrating World Hamster Day.  And here it is again.  I almost missed it, it went by so quickly, much like 2013 did for me. 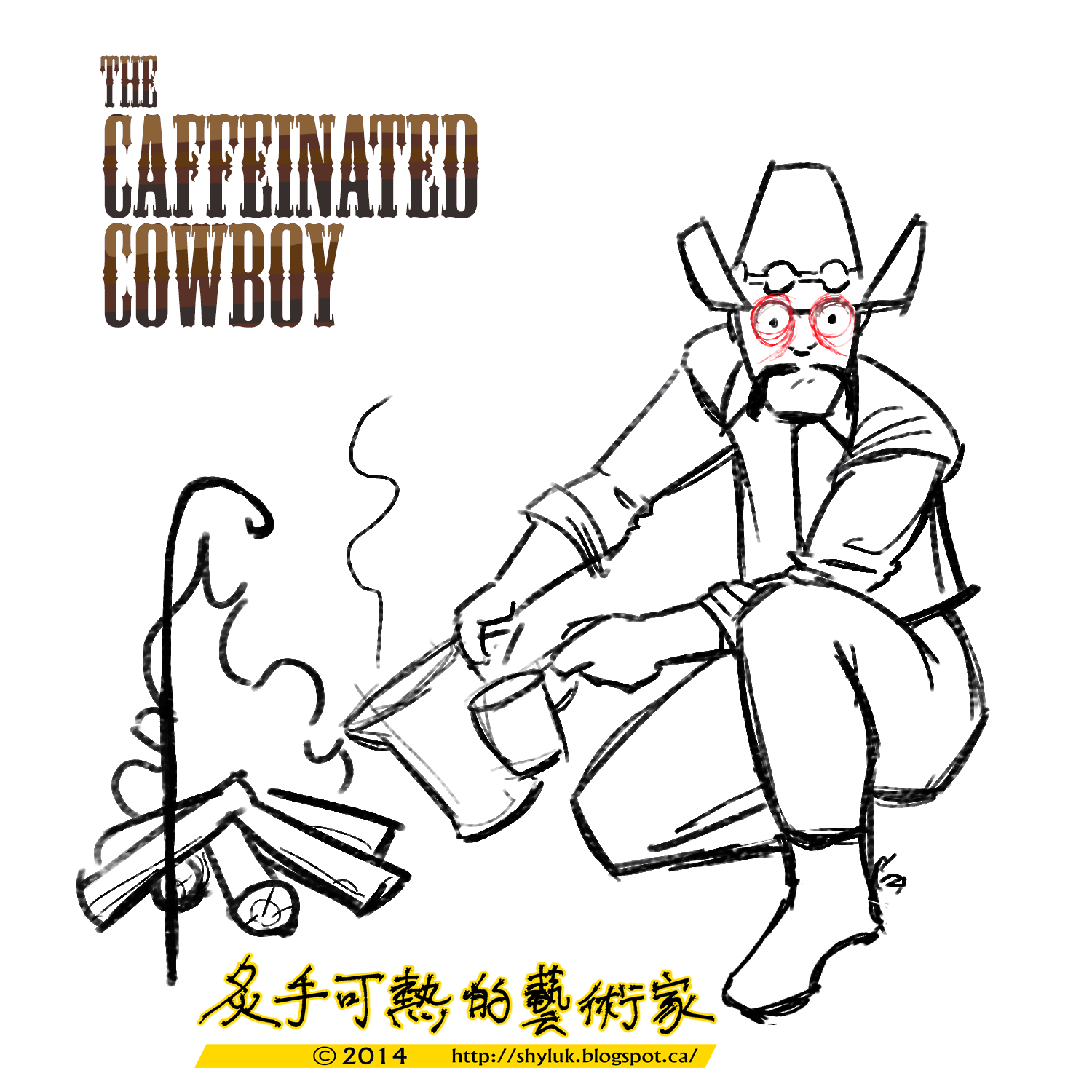 After I drew The Melancholy Cowboy here on JSVB, I wanted to draw The Procrastinating Cowboy.  Then I got kind of busy the next few days.

So here's The Caffeinated Cowboy, since cowboys tend to drink a lot of coffee I guess.

This sketch is based on another sketch by Mark Andrews in Walt Stanchfield's "Drawn To Life" Volume Two. 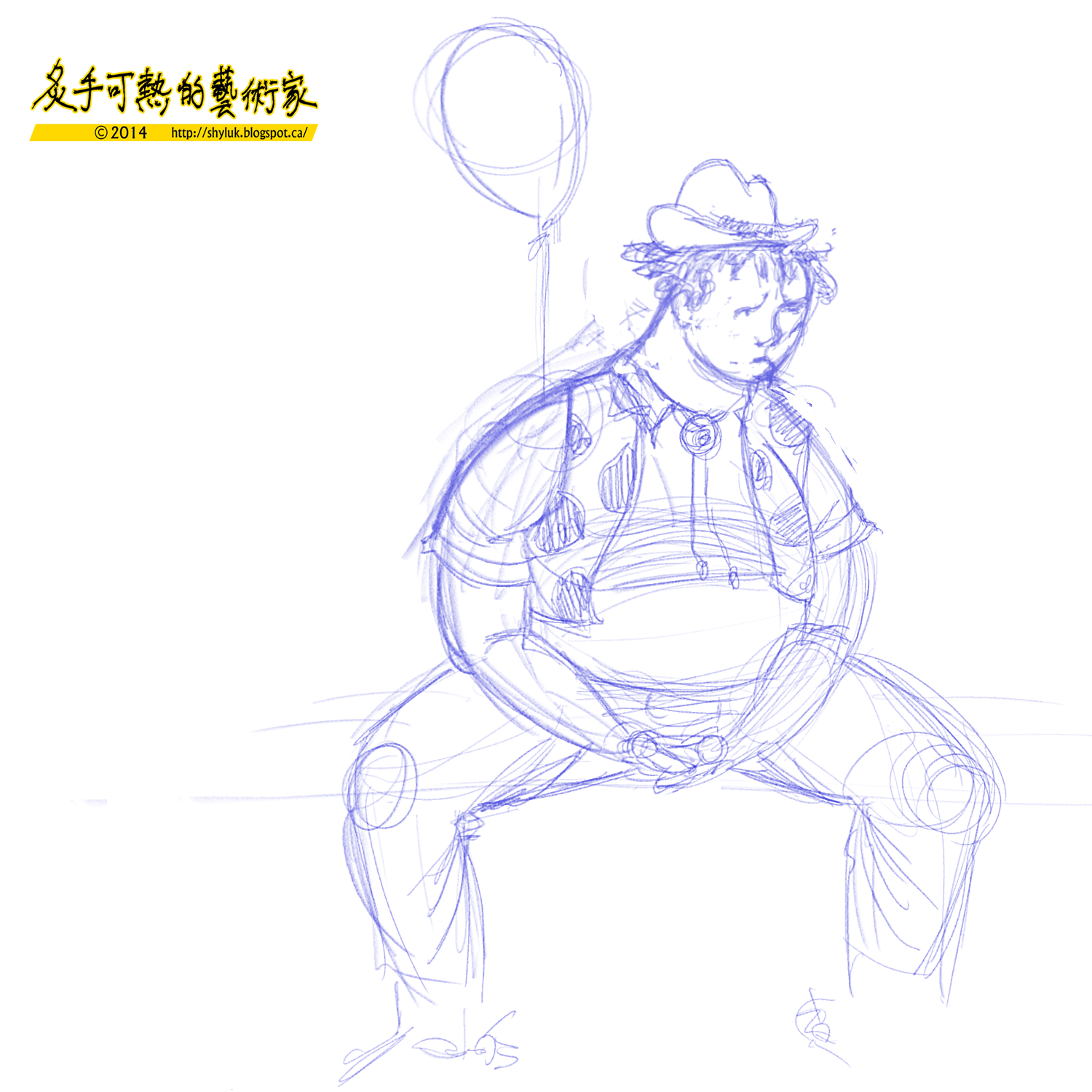 Today on JSVB, we endure a visit from The Melancholy Cowboy.  I've realized that lately I've been ignoring my sketchbook.  If there's a sure way to work up a major artist's block, ignoring practice and fundamentals is it.

Don Hahn compiled and edited all 1,000-plus pages of Walt Stanchfield's master class notes into two amazing volumes called "Drawn To Life".  I used a sketch from Volume Two by Ed Gutierrez as my reference and starting point. 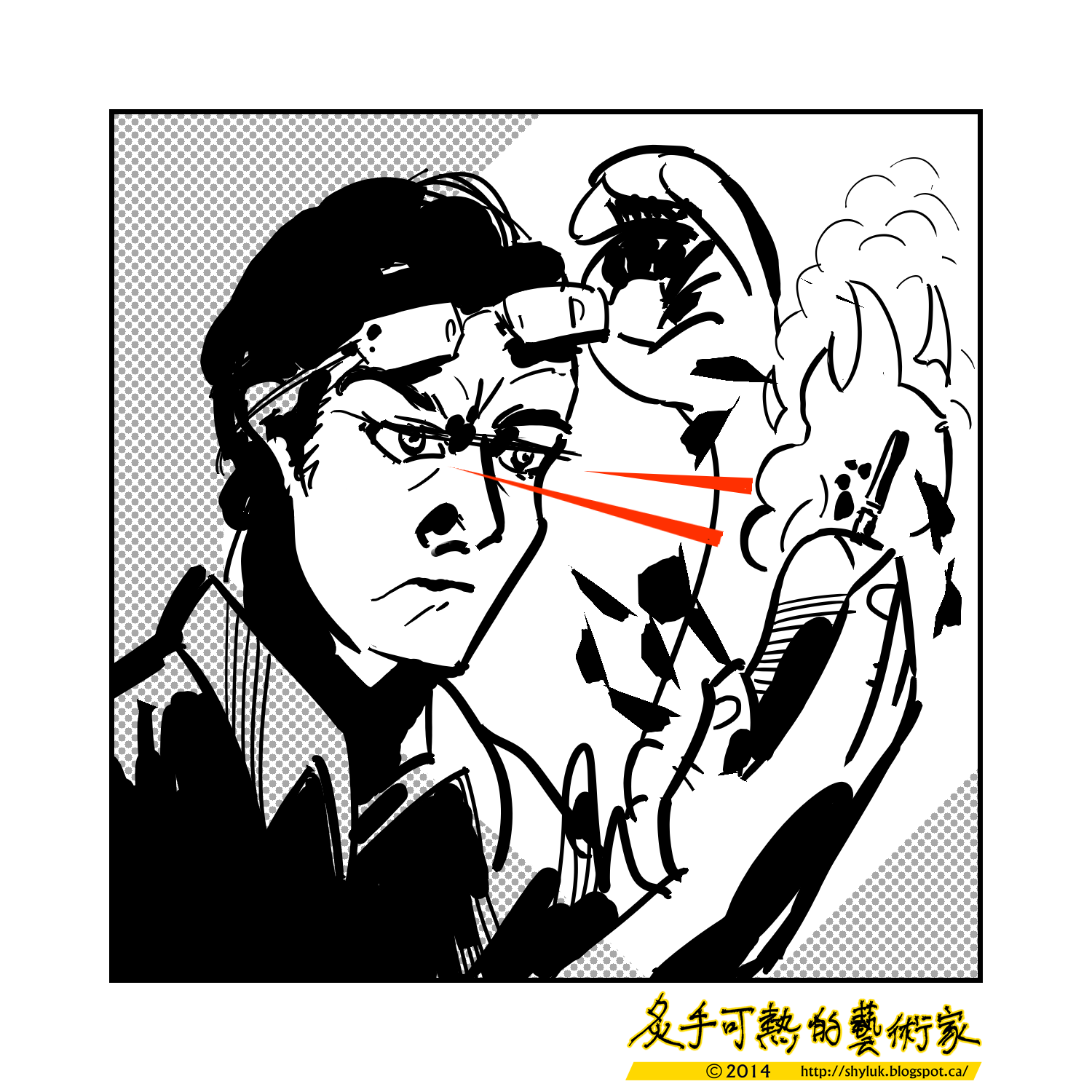 Just another day in my life:  paying bills over the phone.  This time, after a couple minutes of sorting through menus, I get put on hold for an agent.  "Your call is important to us!" intones the inhuman artficial robot voice.  Then it plays me the entire song from the musical "Grease"...

..."You're The One That I Want".
Computers are so irony-illiterate.
﻿
This JSVB Entry is by Jeff Shyluk at 6:20 PM