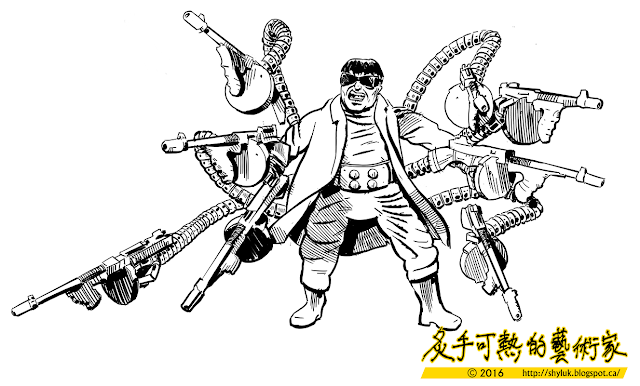 The moment I laid the last brush stroke on this artwork, I realized I should have inked Doctor Octopus with real octopus ink.  Do I have time for a do-over? 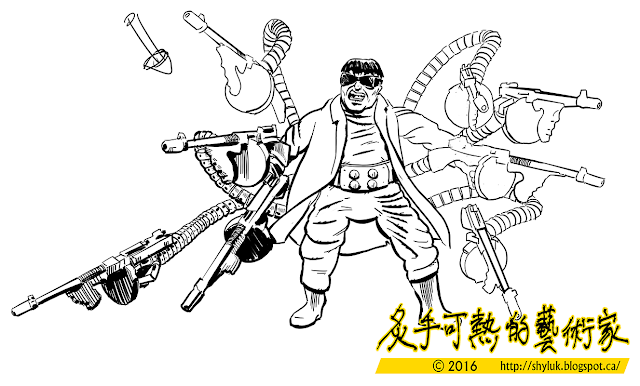 Off and on, I've been working on this drawing of Doctor Octopus.  Why?  To prove a point.  One of those points where you say, Oh Yeah, I Guess Jeff Was Right, only it takes you about a tenth of a second to agree with me and another tenth of a second to move onto something in your life that isn't based on pure trivia, while I pour hours and hours into this... thing.

The work has been tedious, I will freely admit.  I'll never be mistaken for Doctor Octopus' biggest fan, yet even then I decided to give the guy extra arms.  Why?  To prove a point.  Stan Lee and Steve Ditko, Doc Ock's creators, long ago proved a much stronger point: yes it's fun to give a character extra arms (see: Edgar Rice Burroughs), but if you do that, just give the fellow as few arms as is absolutely necessary to get the idea across to the audience.  (If you didn't know, Stan Lee, early in his art career, was famous for drawing extra arms and legs onto his characters.  He'd pick the two arms and two legs he liked best and erased the others.  It's a fast and sophomoric way to render a key pose.  The more experienced artist will either have the pose in his head or on a model sheet, or will use thumbnail sketches to get the key pose just right, but there's nothing wrong with Lee's method as long as you can handle lots of erasing.)

To speed things up, I based this drawing off of a picture of a Doctor Octopus toy that I found on the Internet.  The Tommy guns were fun to draw, but I also traced them off of a three-dimensional virtual model provided by Tom Kranis.  That way, they stayed consistent over eight iterations.

Even so, the drawing is not finished, but it's kind of cool to see how the values go from flat to shaded across the image.  That's why I decided to post to JSVB today. 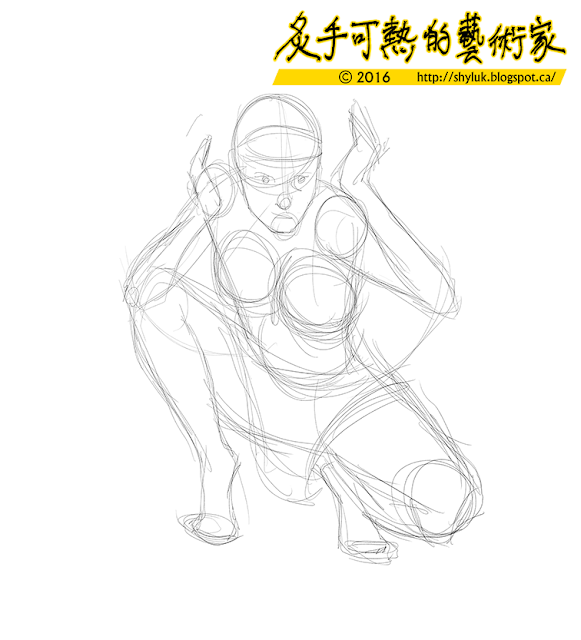 My sketch of a girl crouching.  I'll need it for reference later.

Today is Ungood Art Day on JSVB. This post discusses an X-Rated sexual act, although the image is only of the back end of a car, a Chrysler in fact.  If you do not want to read X-Rated material, please do not scroll down.  I know, I know, what has JSVB come to? 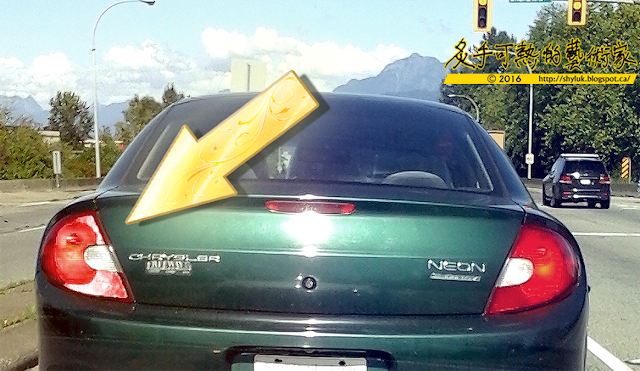 I've been considering this for years, maybe over a decade.  Not every single day, of course.  Only the previous week was the first time that I saw someone on the road with the tail light lit up when I had a camera handy.   The configuration of the red plastic, the exact position of the eye-like bulb within its oblong reflector and the truly unfortunate positioning of the white reverse lamp all contribute to make spotting a Neon on the road an especially evocative event.  It's not like the old Neons are common anymore, which is a good thing on many levels.

I should have made Suction Cup Allan (please click here to see that) my Ungood Art for this month, but my friend Earl already made links to it so I don't want to break them by moving Allan to Ungood Art Day, traditionally the thirteenth of every month here on JSVB.  Instead, you get a putrid photograph. 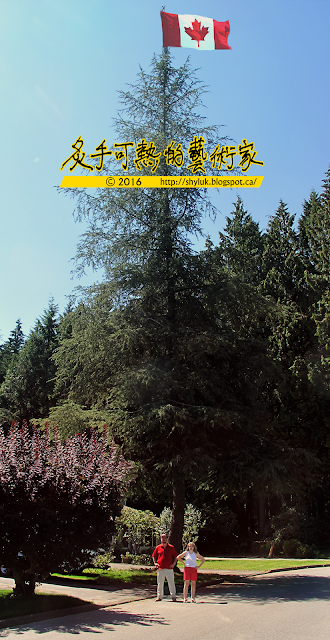 My wife commissioned me to create a picture with us standing in front of our tree, with a Canadian flag flying proudly from its tallest branch.  The second step of a three-step step-ladder is enough to make me giddy with vertigo, so I decided that I'd accomplish the entire thing in Photoshop.

Both of us are Photoshopped into the base of the composition, the foliage is Photoshopped, and of course the flag is was raised using a clever assortment of ropes and pulleys until it was hoisted to the top of the tree.  Nope: it was Photoshopped.  I also used Photoshop to adjust and correct the colours and to crop out some extra people and cars.

I inked Indy & Sallah loosely, since the cartoon sketch was really loose as well. 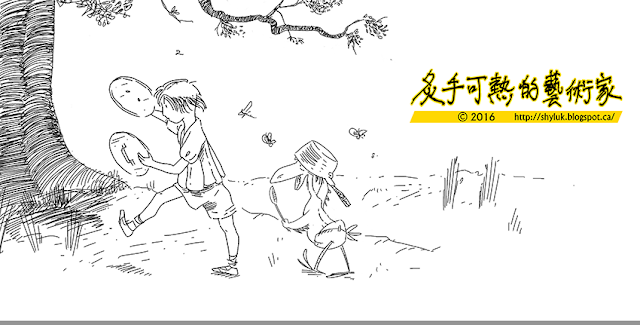 I've inked the Toddler Stork image, and I hope you recognize my inspiration.  If you guessed E.H. Shepard, either you've read yesterday's JSVB post or else you know literature.

E.H. Shepard was the illustrator for A.A. Milne's Winnie-The-Pooh stories.  Even though they are intended as children's books, I am having a hard time thinking of a modern-era pairing of text and illustrator that could be better than that.  For the Toddler Stork image, I wanted to evoke the same sweet sensibility that infuse Shepard's drawings.

His style is difficult to match.  Since he was working a full century ago,  not only were his aesthetics different from the ones we enjoy today, but so was his media.  By that, I mean mundane things like paper stock, pen nibs, and the quality of ink, which would have been primitive by our standards.  Yet to properly appreciate that old-time style, you need to use the same tools.

I didn't.  So, if you look at the above picture and compare it to something by Shepard, it's easy to see where my emulation falls short.  However, I didn't want to set myself up in inkwells and quill pens.  I have a habit of spilling indelible ink: click on these links to see JSVB Post #22 and JSVB Post #1167 to see more.

I love the Winnie-The-Pooh books.  They were companions when I was very young.  I also enjoy the Disney movies, but I find their style to be more calculated and engineered.  For a while, I had the job of drawing some of the Pooh characters for animation.  It was difficult work and I wasn't at all good at it, so the House Of Mouse version of Pooh fails to generate the same happy memories that normal people would have.  Woolie Reitherman's 1966 take on Winnie-The-Pooh is a masterclass in character design and character animation.  There are hundreds of small details that make the Disney version of Pooh iconic while at the same time distinct from the Milne source material, enough to ensure that the Disney version would be a world-spanning franchise.

Who doesn't love the loveable bear?  He has so much heart and vitality.  He is the perfect companion to wise, wistful Christopher Robin.  Well, in order of preference, A.A. Milne, his son Chistopher Robin Milne, and E.H. Shepard, have all gone on record as being firmly displeased with Winnie-The-Pooh.  While not a revelation to many JSVB readers, this fact caught me by surprise.

A.A. Milne was a successful author whose prolific career was completely overshadowed by his handful of children's books.  C.R. Milne felt that his childhood was robbed by the ambition of his father.  E.H. Shepard resented the bear since he felt his more mannerly artwork was more representative of his talent yet was largely ignored (he did find success illustrating Kenneth Grahame's "The Wind In The Willows").

Like many artists, I believe I wouldn't mind being cursed with being the creator of a wholesome, beloved character that becomes a worldwide phenomenon and that also allows me a comfortable living.  You could compare and contrast Joe Shuster, who first drew Superman.  After DC Comics bought out his artist contract, he resorted to drawing obscure cartoons and providing illustrations for sadomasochistic sex magazines.  He died in debt.

How can beloved artists become so turned against their creations?  There are theories.  The art business is, after all, a business, and money drives intent.  Where the money comes and goes defines the form of the art.  Society also values some forms of art much more greatly than others.  It's not easy to deal with public ignorance of your work, and I suppose it's equally difficult to deal with adulation.  Nobody trains artists to deal with that.  They either figure things out or they become twisted by their work.  To survive this process somehow makes one a better artist in the end.  To die by it makes the work more valuable.

It makes one pause to think. 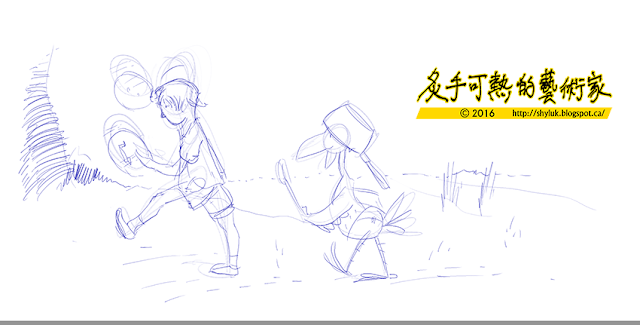 I've used a cartoon stork as a recurring character in my artwork.  Normally, when I work out what a character should look like, I try out as many poses and expressions as I can.  Since the stork doesn't do very much, I've cut out most of that work just to get something finished on paper.

Now what I've been tasked with is to draw the stork in various ages.  I have a full-grown stork and a baby stork, so I wanted to have a toddler stork.  Above is the concept, based on the illustrative work of E.H. Shepard.

I've turned an iconic screen-grab from "Raiders Of The Lost Ark" (1981) into a quick pencil sketch.

For reasons I can't possibly explain with rationality,  I've edited some old photos of my friend Allan by adding the welt from a suction cup dart onto his forehead.

These are pictures from twenty years ago.  I love those times now, as they were formative and beautiful and Allan is far too good a friend to deserve this treatment.

JSVB needs posts, though, so here we are.  Photo credits go to my friend Earl, whose camera collected these snapshots.