I've mentioned before that my house is near the woods.  As it happens, there's a small cabin nearby, and for Valentine's Day, I decided I would take my wife out there.  It's not our cabin, but I know nobody has been using it for a long time.  It wasn't even locked.  I figured if the owners did come around, I could just say that our car broke down.  With my car, that's a likely story.

So, we toasted Valentine's Day with a little champagne.  After all, I'm a man and my wife is a woman, at least last time I checked.

In behind me in the picture above, you may notice one of those old-fashioned reel-to-reel tape players.  We thought it strange to see one of those in the cabin, but we absolutely did not touch it.   After all, it wasn't ours to play with.

But I will tell you who did play it: a bunch of crazy kids from Michigan, who hauled up in an old 1973 Delta 88 Oldsmobile, a real clunker.  They wanted to hear the tape, and guess what?  The soundtrack unleashed a horde of Canadian  Candarian demons that spawned in the woods and ate just about everyone alive, everyone except one exceptionally loud-mouthed braggart.

It ended up that I took my sweetie out to the midnight Friday 13 - Valentine's Day showing of Evil Dead: The Musical.  It's billed as a 4-D stage sensation - the fourth D is blood!  As the show progresses and the body count rises, folks sitting in the Splatter Zone get hit by a lot of stage blood.  In our case, we were wearing good white clothes, and we got absolutely drenched.

Sure, it was a low-budget production, and very low-tech.  The stage was too small, the actors were semi-pro, and the blood was watered down. However, everyone obviously gave their best performance, the music was terrific, and we were howling with laughter the whole time that we were dripping with simulated gore.   Perhaps the best performance was by the ingenious stage crew who made the most out of what they had to deliver a really memorable production.

I'm not blushing in the picture, it's just that I ended up as the target of bucket after bucket of stage blood, which makes the haunting story of the Evil Dead come to life... and then get hit in the chest by a shotgun, only to stagger back to life again... only to get stabbed in the back with an eldritch knife... only to crawl back to life yet again... groovy!

Email ThisBlogThis!Share to TwitterShare to FacebookShare to Pinterest
Categories: Jeff's Life (As We Know It), Metro Vancouver

Today is Ungood Art Day on JSVB.  This entry is truly ungood, not politically correct, or nice.  A New York citizen is deluded into thinking he is Hobbes The Tiger while beating a little old lady.  And a turkey-like creature gets clobbered in the process.  If  you don't want to see any of that, and you know I won't blame you if you don't, then please don't scroll this page down. 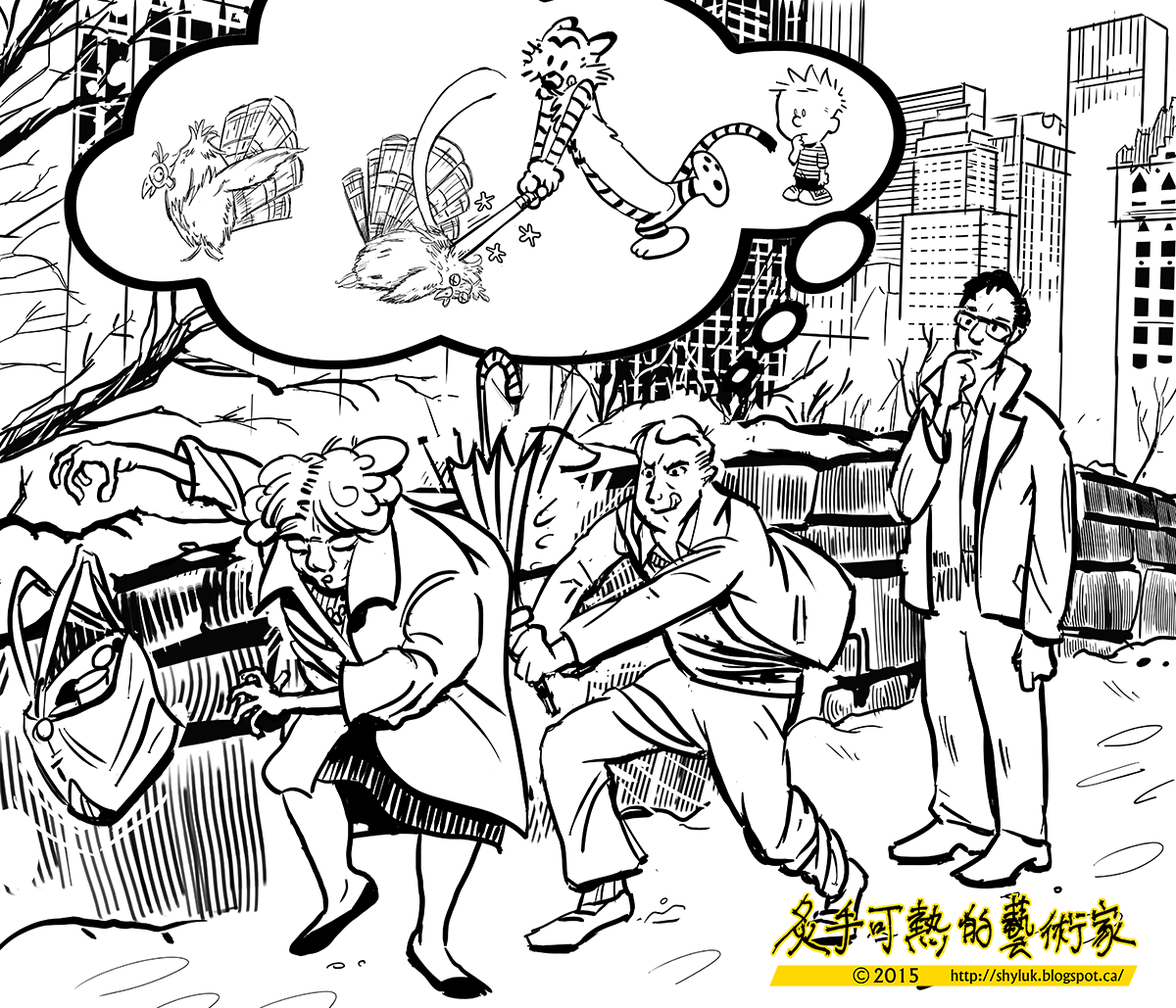 First, this is for my friend Rob, who lives and works in New York.  This is supposed to cheer him up!  Winter has been rough over there.

So Rob is a big Calvin and Hobbes fan, like anybody with good taste.  He's also a big fan of the videogame "Don't Starve".  See, that's why Hobbes is bashing the  turkey-like thing, known in the game as a "Gobbler".  In the game, your character races against starvation and insanity to try to survive a hostile wilderness environment.  Trust me, when you're starving and nearly insane (in the game! In the game!!) you'd club a virtual grandmother to get her drumsticks.  For whatever reason, though, I went against including actual game characters, interchanging them with the iconic comic strip personalities.  So, I think there's humour there, although it's very dark and microscopic.  The thumbnail sketch I drew to plan this looked funnier somehow.

It's maybe also fair to compare Central Park at night with the violent, chaotic world of Don't Starve.  "Of course you’ll have a bad impression of New York if you only focus on the pimps and the C.H.U.D.s.", so says Marge Simpson.

Still, I am thinking of colouring it in.  Rob should see it first.  If he hates it, then forget the colouring.  Also, I am thinking of substituting the little old lady with Woody Allen, maybe that would be funnier.  It's been a long time since Woody Allen has done anything funny.   Me too, apparently.

Ungood Art Day is traditionally the 13th of every month.  I try to show a piece of artwork I have made where often despite good intentions, the thing ends up being... ungood.  Today is a Friday the 13th.   So far, it's more than lived up to the hype. 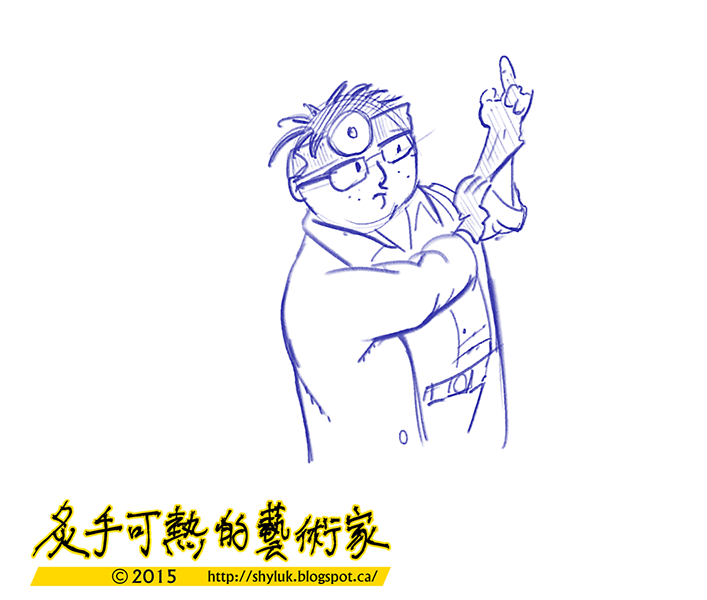 I drew a caricature of my family doctor.  A man under forty would think this is a funny image.   A man over forty considers this ominous. 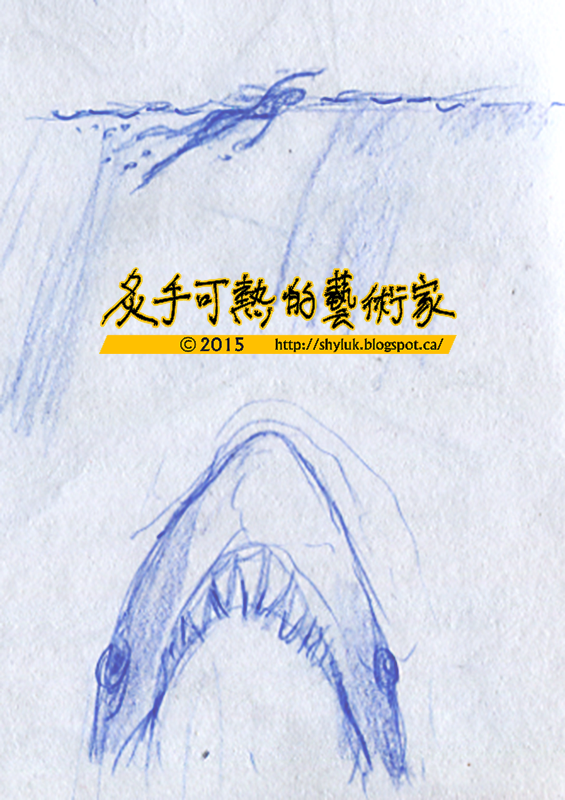 A while back, I wanted to explain to someone the look of the iconic Jaws poster.  Honestly, it was just faster to draw it than to look it up, so here it is.

Eventually I did look it up, so I could assign proper credit here on JSVB.  The original painting used for both the Peter Benchley novel and the Steven Spielberg film was created by Roger Kastel.  Kastel's version is only one million times  better than mine, but my JSVB version has one distinct artistic advantage over Kastel's: I know where it is.

Strange, but not unpredictably so, Kastel's iconic painting went missing somewhere between New York and Los Angeles around the time of the movie's debut in 1975.  Conspiracy theorists believe the picture was stolen.  It has yet to be recovered. 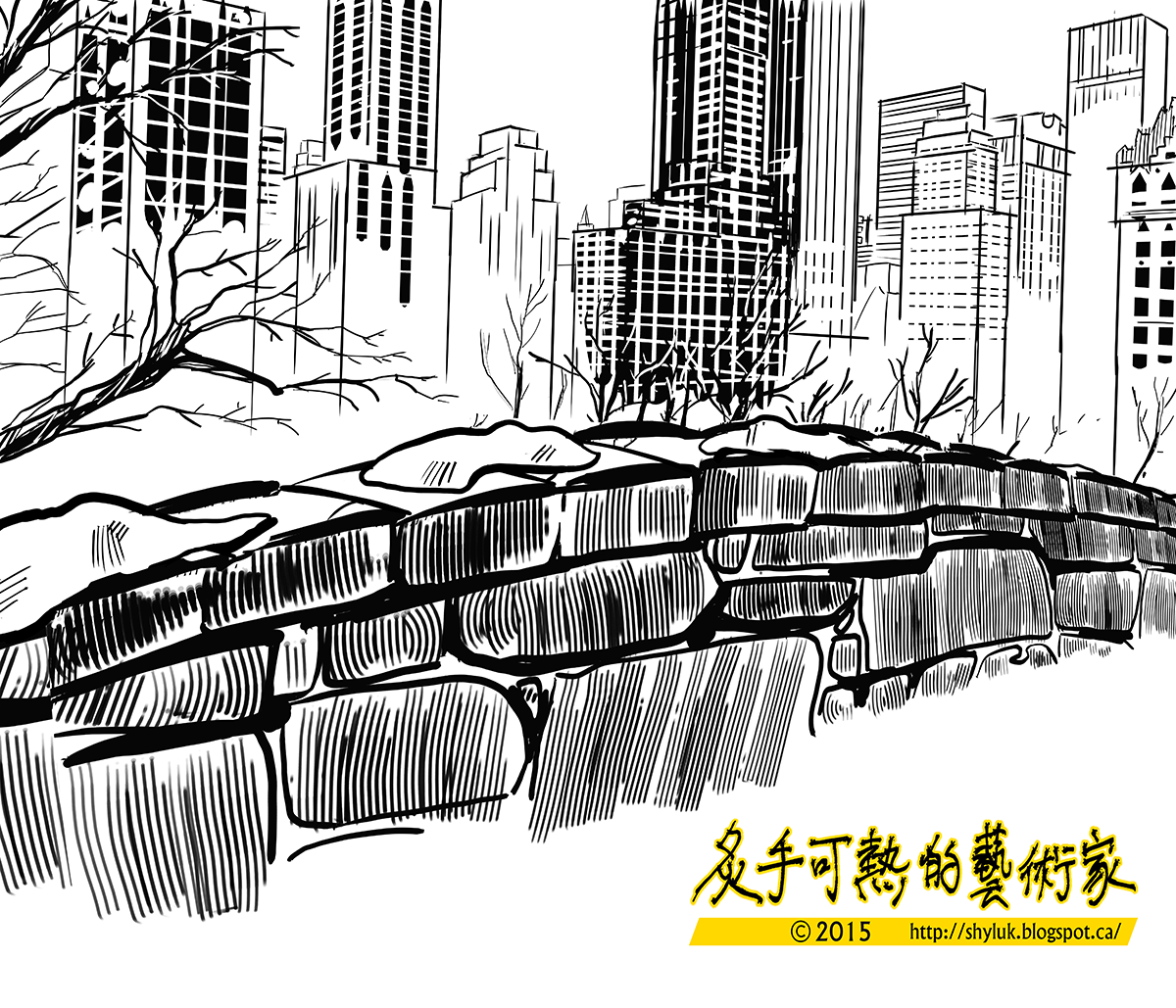 I revisited my ink drawing of winter in the city.  I fixed the composition of the wall using modern methods.  I first re-drew the hatching lines.  Then I lifted the wall onto its own layer using Photoshop.  I used the Perspective tool to re-render it as a false three-dimensional object and replaced it into the scene.  Lastly, I added more snow to cover up some of the seams, although I missed one on the far left.

This change makes me happy, since now the stone wall suggests a stronger foreground; before, the image seemed too flat. 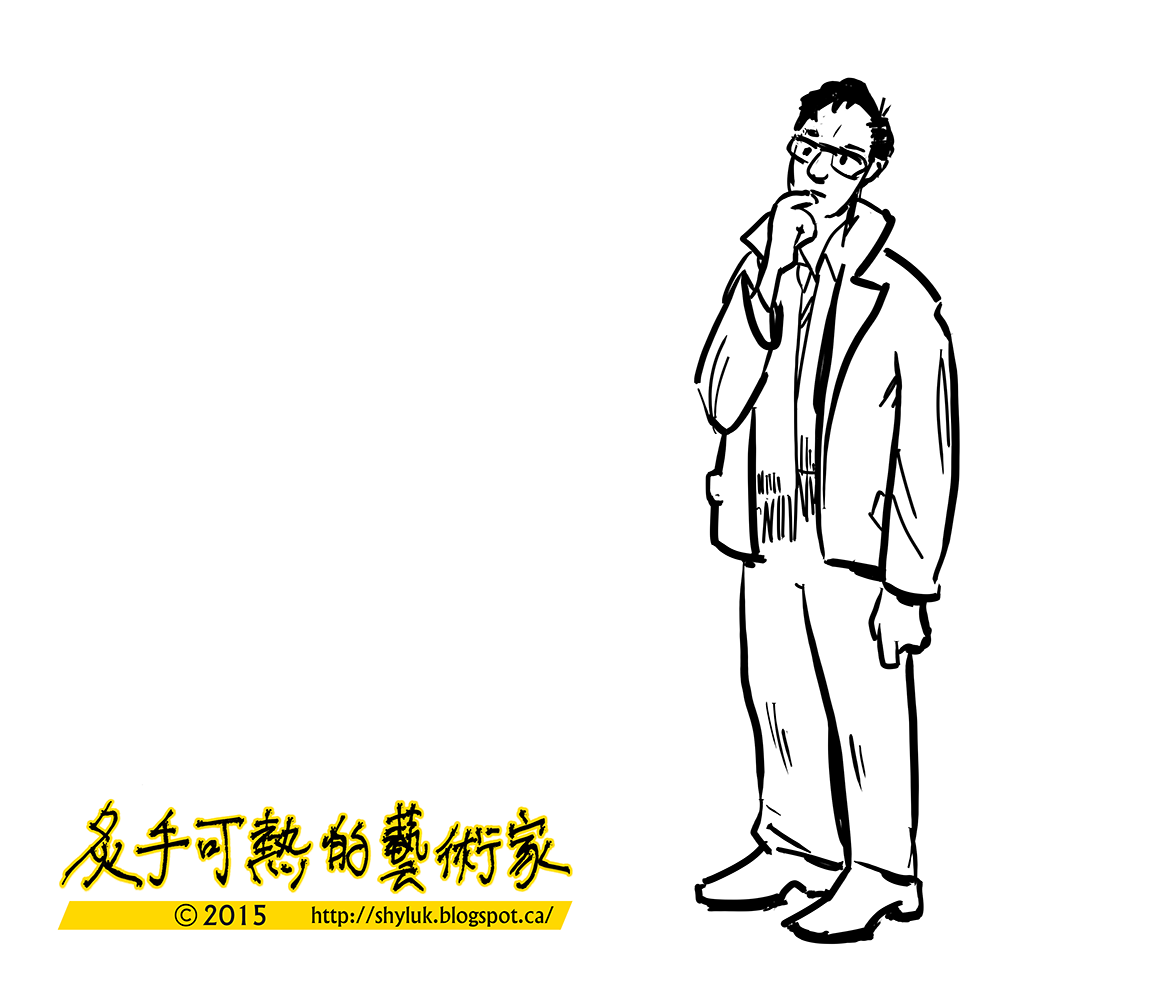 After a good night's sleep, I decided to yank JSVB Post #1071 and replace it with this image of myself bemused.  I'll repost the original image on Ungood Art Day where it belongs.

Note that I gave myself nice shoes, since the other day I bought nice shoes!

Email ThisBlogThis!Share to TwitterShare to FacebookShare to Pinterest
Categories: Brush Line and Inker, Jeff's Life (As We Know It) 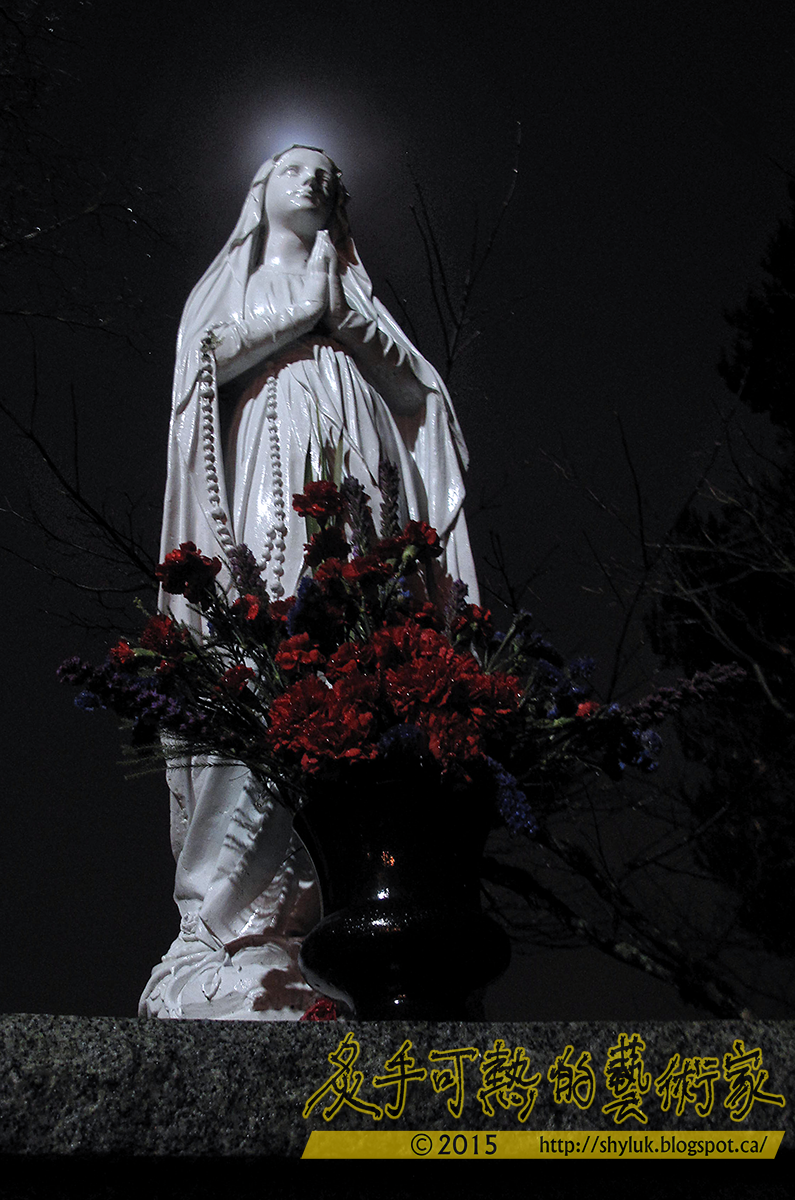 Finishing my Nativity icon took me well into the wee hours.  Do you ever hang around churches at midnight?  Sometimes they can be strange places.  Heading back to my car after finishing the painting, I noticed this statue beaming in the night.

It's lit by its own spotlight after dark, so nothing supernatural goes on here.  But the tone of the illumination matched exactly the moonlight that was filtering though low cloud and nocturnal fog.   I found my camera in the trunk of my car and marched back to the site to frame this shot.

The halo is not an effect, rather it's real moonglow that I positioned behind Our Lady's head. I'm pleased with how the composition of this shot came together: I doubt I'd ever get the same quality of light again.  It was like the sky was filled with quiet beatitude, a rare enough and personal moment in our modern world. 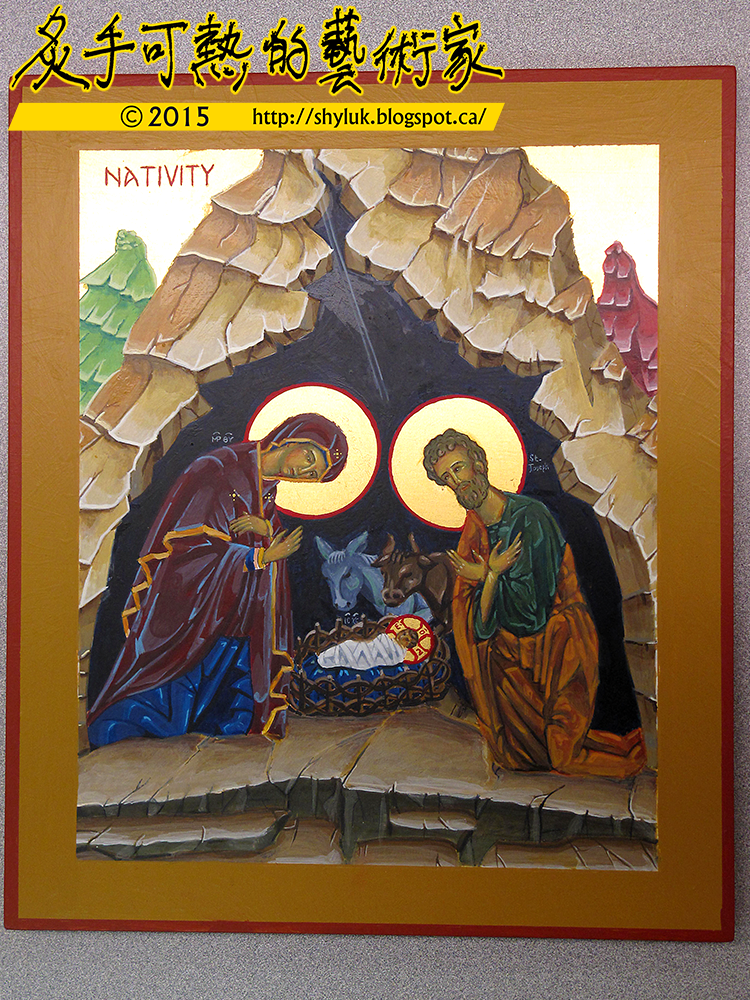 I took a photo: there is no more painting remaining to be done for my nativity icon!  This is the finished work.  One thing remains to be done to finish the piece, and that is to seal it.  Sealing will make the colours fast and vibrant, and will eliminate the streakiness that shows in this photo. 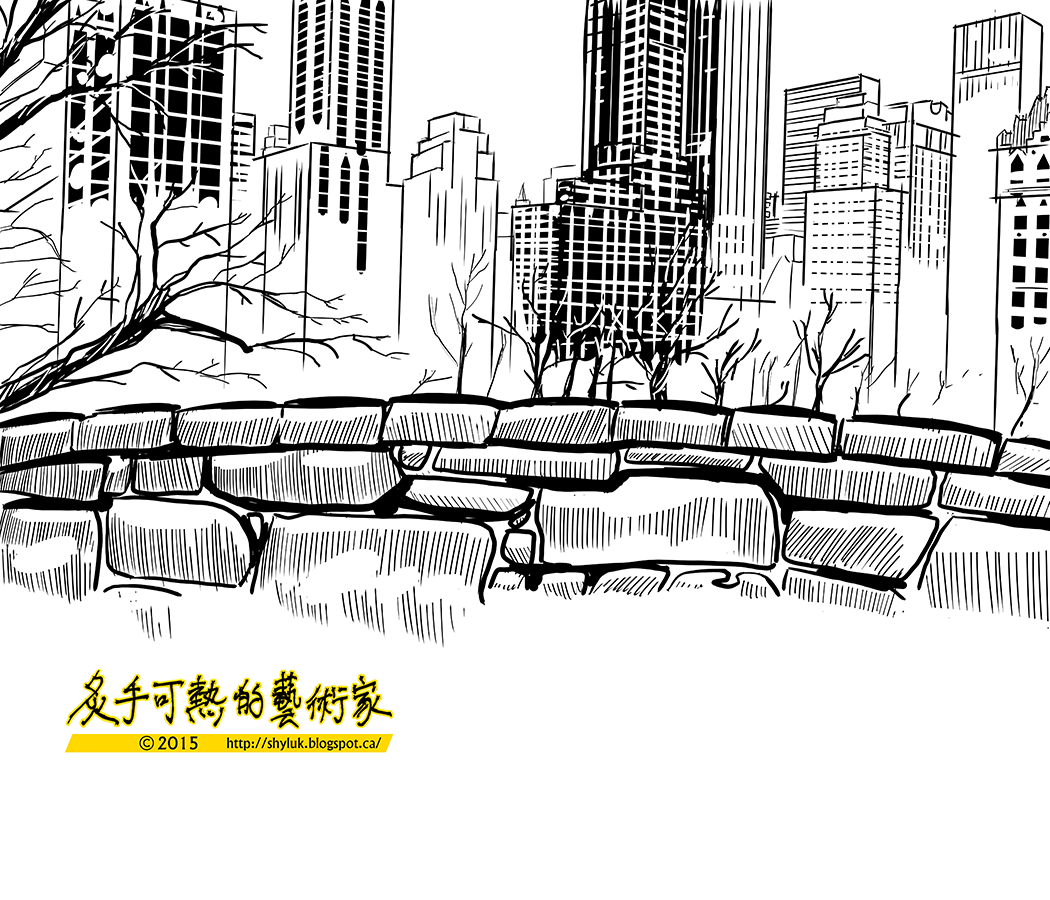 An ink sketch of winter in the city.  It's sloppy, but I intend to fix it with a lick of paint and some Photoshop.