Today is Robot Nurse History Day, when we celebrate mechanical and automated nurses throughout history.  Seriously, since there is a worldwide shortage of human nurses governments are turning to building robot nurses in an effort to manage workload.

I've ripped off from too many sources to create this diagram to mention them all, so as compensation I won't use this space to complain about the Internet leeches who have ripped off JSVB. 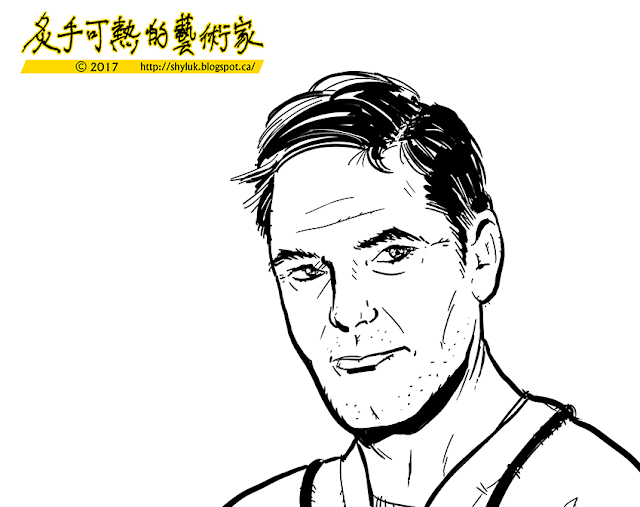 We have a saying here at JSVB:  "If you're drawing George Clooney, it must be getting close to the fisrt day of April."

It's a crummy saying. 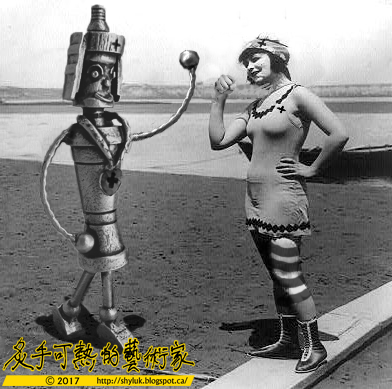 Today's JSVB Post fills a gap that has been missing in my blog for a long time: pictures of old-time bare-knuckle nursebot boxing.

Here is a rare photograph of famous nurse Florence Nightingale, who faced off against a mechanical nurse circa 1850.  The bare knuckle match went a hundred and fifteen rounds staged at Los Angeles' famous Venice Beach.  Nightingale won by technicality after the fighting nursebot ran out of steam.  Literally.

The robot is credited to Pete at Builder's Studio.  The original photo is from Evans Photography in LA. 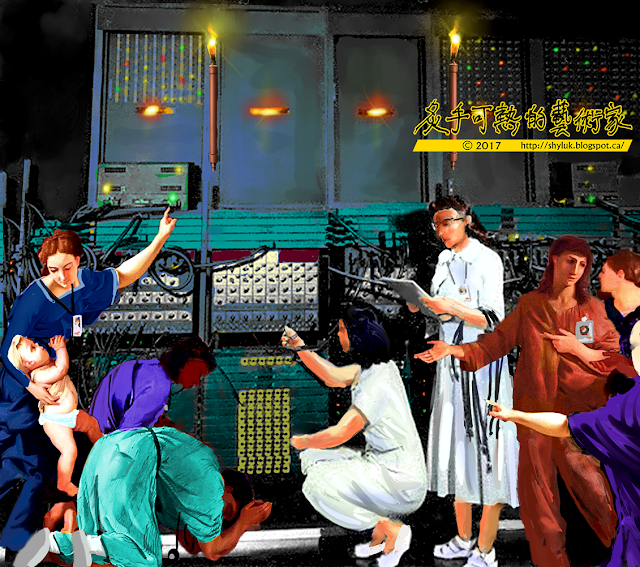 I am working on some April Fool's tomfoolery.  As part of an upcoming project, I photo-bashed some public domain pictures to make a scene of doctors and nurses idolizing a giant computer.  Some of the source material was black and white and some of it was in colour, so I had to colourize all of the elements to make them blend.

This is nowhere near a photorealistic picture, but as I worked on it I was struck by how easily religious robes can be transformed into medical scrubs (the supplicants were taken from a picture from the biblical Old Testament where people were worshipping a golden calf deity), and how computer technicians dressed like doctors and nurses from back in the day when a single computer would take up an entire room.  Look it up for yourself: when men worked on the computers of the 1950's and 1960's, they wore suits, ties, dress shoes, and lab coats, and women would wear the same style of dresses nurses wore.

Things are so much different now.  Or in the case of idolatry, maybe not. 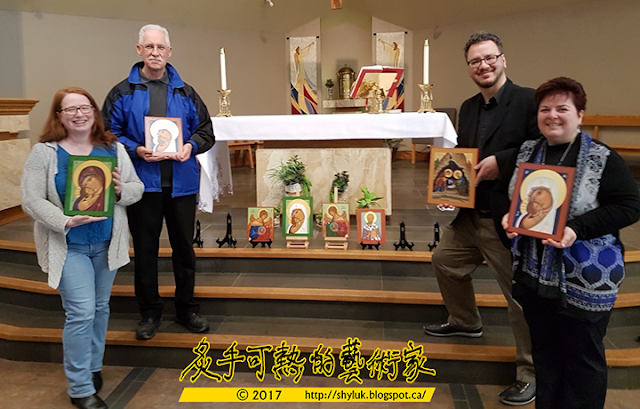 There's a saying in the iconography business: "It's only a painting until it's been blessed."  So, my wife and I trundled off to early Sunday mass and I managed to stay awake.  These icons represent around half the class, from left to right Anne, Steve (fearless mentor), Me, and Sheena. The rest of the class and their icons couldn't make it which was a shame.  It was the only sunny day of the month! 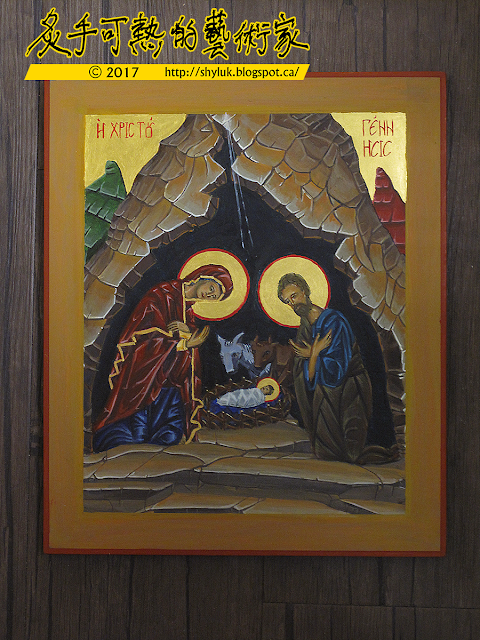 I know I forget to post my final results every time I finish an icon, and Nativity 2 falls into that pattern.  I did finish this some time ago, and this was the picture I took back in January.

This icon is very much like the previous nativity icon I painted.  To see the other Nativity, you can click here to see JSVB Post #1195.  I used the same design, but some of the paintwork is a little more mature.  The inscription is in Greek this time.  Mostly, I chose Greek because the Cyrillic Russian and Ukrainian lettering took up too much room.  The writing translates to "The Genesis Of Christ"... Jesus' birth! 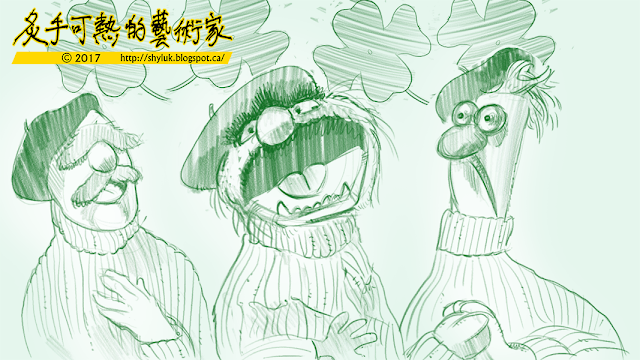 My favourite of all Muppets sketches is Animal, Beaker, and The Swedish Chef singing "Danny Boy".  It's comedy genius on so many levels!

I had my wife take a series of terrible pictures of me, and these five were the worst or best of the bunch.  I require a decent one-shot picture for a mail-out I am working on but none of the artwork for the laying-out process is ready yet.  So, I decided I wanted a placeholder and made these pictures for that purpose.

That and today is Ungood Art Day, traditionally the thirteenth of every month here on JSVB.  These are pretty crummy pictures.  I intentionally made them worse by subjecting them to a few nasty Photoshop filters to make them look like a bad print job.  I have my reasons.

EDIT: My wife tells me that if I ever go missing, these will be the photos she gives to the police and the news media to help them find me. 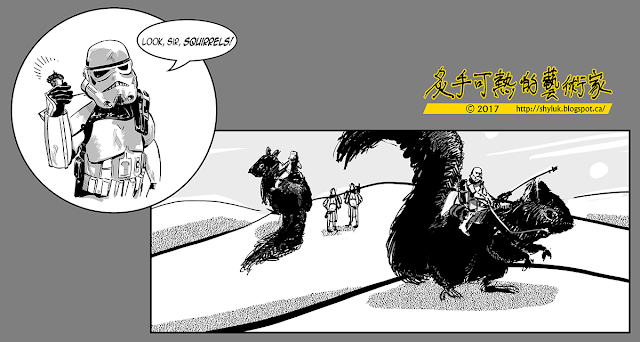 Well, it's funny because it's silly.  Click the pic to embiggen.

Star Wars likenesses are the intellectual property of Disney. 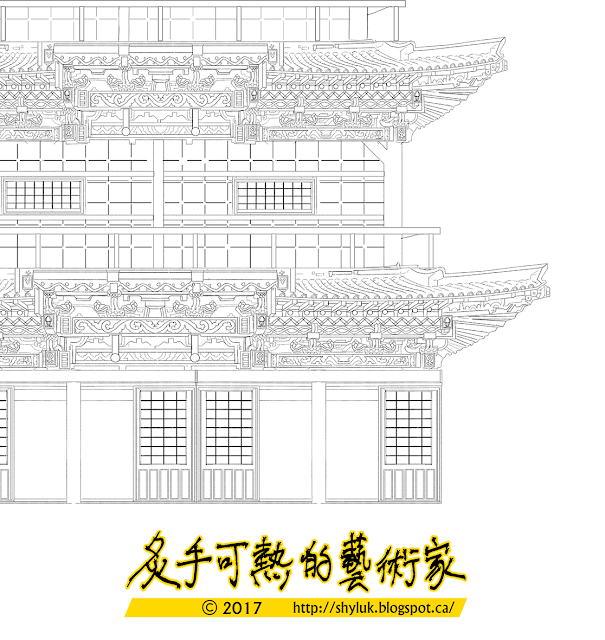 My iteration of the Asian building I've been working on.  Thanks to recombining pre-built rendered elements as if they were LEGO blocks, I can make quite a large, ornate structure. 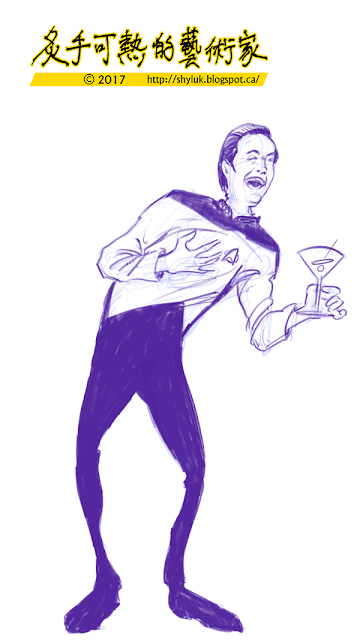 My wife tells me that today is "Lieutenant Commander Data Appreciation Day".  The reason for this is a conceit built into the Star Trek: Next Generation episode "Cause And Effect".  In the episode, the number three saves the Enterprise from repeated destruction while being caught in a treacherous time loop.  Mr. Data uses 3's to reason out a non-lethal exit from the trap.  And... today is the third day of the third month, so more threes.  You put threes and Data together and you get Data Appreciation Day.  It only gets worse on May the Fourth, you know.

The picture is my tribute to The Drunken Data.  It's something I wish I had a photograph of, but I know I captured the essence of Drunken Data in my sketch.  This was the second night of the San Francisco Star Trek Convention, and I was still reeling from an event earlier in the day where I attempted to seduce actress Terry Farrell and not only failed horribly but was shot down by her in front of a shocked audience.  And that, dear JSVB readers, is a long, miserable story right there.  So I needed a nightcap, and I dragged my wife and her brother to the hotel lounge where thankfully the bartender had no concept of how to portion drinks.  I ordered a nice whiskey, and she poured me a triple or maybe it was a quadruple.  Whatever it was, I could only drink half and I kept the other half in my hotel room to drink the next day.

At the bar was The Drunken Data.  He was a true likeness of Brent Spiner in an authentic Star Trek uniform and skin paint, only that he was maybe twenty or twenty-five years old.  Still, he was one of those people who very strongly resemble the characters as you see them on TV.  And he was skunk-drunk.  He laughed loudly and heartily at everything which in itself was pretty funny, considering Data.  And he was unable to hold himself upright, although he could stand on his feet.  He leaned to the left thirty degrees off true, though.

I bet he wondered by the hotel was tilted that night.  I did not envy him his hangover the next day.