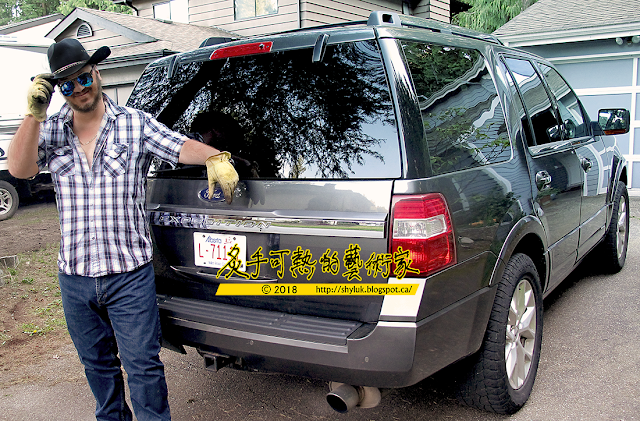 I hear the pipeline comin'
It's rollin' 'round the bend
And I ain't seen the sunshine
Since, I don't know when
I'm stuck in the Lower Mainland
And news keeps draggin' on
But that pipeline keeps a-rollin'
Down to Burnaby Mountain

When I was just a young man
My Mama told me, son
You always vote for Trudeau
He'll always get it done
But Trudy sold the pipeline
Now he's a real sly guy
When I know black bitumen's comin'
I hang my head and cry

Apologies to Johnny Cash and The Folsom Prison Blues.  Honestly, I'm not against the pipeline as such.  I just don't like Kinder-Morgan's track record in Burnaby, I live near where the new pipeline will terminate, and I know that a bitumen oil spill is nearly impossible to mitigate.  Instead of political bluster, it would have been better to have some rational problem-solving. 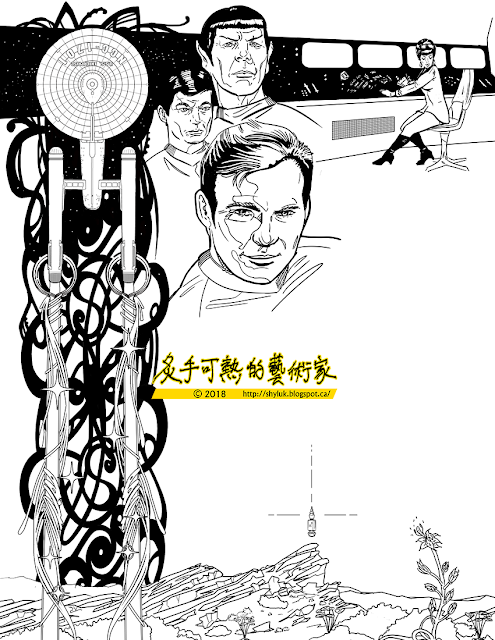 Let's call it a Star Trek letterhead, of sorts.  It's not terribly practical, since I don't leave much space for writing a Captain's Log.  I did find space for Uhura, who I claim as my favourite Star Trek character of all time. 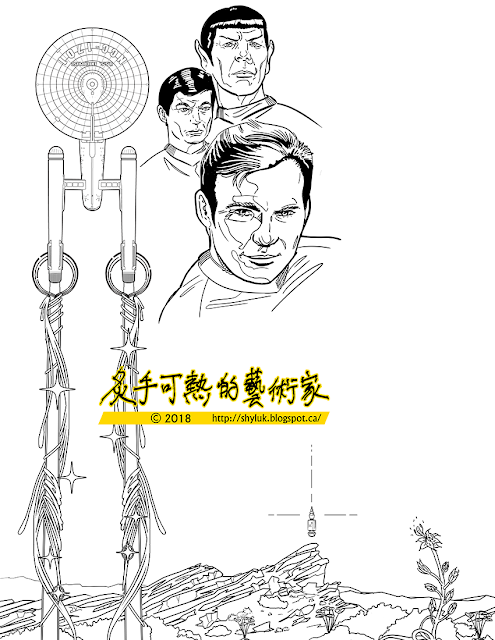 Adding some Enterprise crew.  And when you start believing that I must be the greatest Kirk-Spock-McCoy drawer you've ever seen - since here I am just throwing these characters in like veggies and meat into the stewpot - disabuse yourself of that concept right now.  There are hundreds of Star Trek books and novels, each with its own cover with these three Star Trek stars. I just picked one from the Internet and aped it. Thanks, Simon & Shuster! Star Trek imagery (and Simon & Shuster) is the intellectual property of Paramount Pictures. 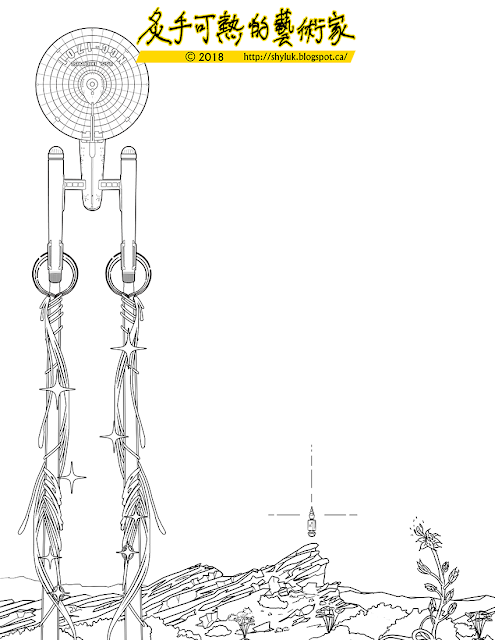 Here I have placed the USS Enterprise with the famous Vasquez Rocks, an Omicron Spore Plant, and why not?  Nomad!  All of these things are iconic Star Trek images, although they don't ever converge in any one episode.  Star Trek imagery is the intellectual property of Paramount Pictures.

1497 - Another Enterprise, Another Plasma Trail

Pleased with the effect but not with its legibility, I decided to simplify the art-nouveau plasma trails coming from the Enterprise.  Star Trek imagery is the intellectual property of Paramount Pictures. 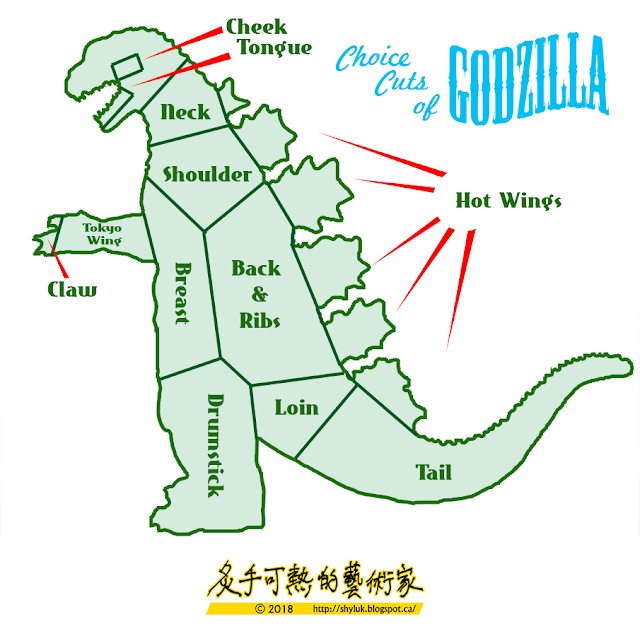 Today is the thirteenth of the month, which is Ungood Art Day on JSVB.  On every monthly thirteenth, I demonstrate some sort of art I've tried to make that started out with the best of intentions but somehow went south.

This Friday the Thirteenth, I'm illustrating a truly bizarre conversation I had a few days ago.  My friend Ted and I began to wonder if in the instance where Japan was to be hit with a disaster so severe (God forbid!) that the country ran out of food and everyone was starving, could Godzilla be killed and eaten for food?  We reasoned that Big G would probably be somewhere in the spectrum between chicken and alligator, so Japanese barbecue would work for the meaty parts, and you could make soup from the gristly bits.  Each portion should be cooked at around 350°F for maybe three to five hours until the internal temperature of the thickest part of the meat  reaches at least 180°F.  You could marinate the meat in a mix of peanut oil, soy sauce, ginger, garlic and sugar before cooking.  Serve with rice and Yubari melon.

So how many people would Godzilla feed?  The 1950's version of the monster is around the size of a 15-storey building.  Assuming one chicken-sized portion feeds one family for one day... well, that's difficult.  There are no chicken-to-Godzilla volume conversions.

However, thanks to the Internet I now know that nearly 20,000 chickens can fit into a school bus.  I'll round up.  Maybe six school buses can fit into one thin fifteen-storey building, and that building would equal in size to Godzilla.  So, 6 x 20,000 = 120,000 chickens: that many people would be fed.

In 1955, there were nearly 90 million Japanese citizens.  120,000 chickens would feed one tenth of one percent of the population.  That's not a whole lot, but I imagine it would be better than nothing. The mining town of Yubari, for example, had in the 1950's around 120,000 inhabitants, so slaughtering Godzilla could save that community.  Yubari is now famous for its Yubari melon, which is a popular gift to be given at Chūgen, which is a holiday on the lunar calendar for celebrating one's superiors.

Shoot me an e-mail if you ever want to know how you can send me any spare Yubari melons you may have lying around! 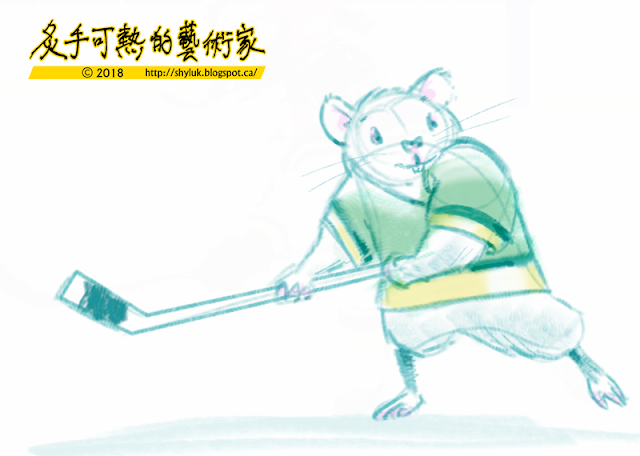 Today is World Hamster Day, an anniversary of the day when hamsters were first domesticated.  Unfortunately, this particular day hasn't been the happiest.

I added Art-Nouveau chemtrails to the engines of the starship Enterprise.  It's maybe too much, but I like them.  Star Trek imagery is the intellectual property of Paramount Pictures.

A starship Enterprise that I drew in Photoshop.  I thought it would be tricky, but the simple repetitive shapes were easy to follow.  This model is far from rigorous in its exactness, but it's close enough for my needs.  Star Trek imagery is the intellectual property of Paramount Pictures. Easter this year coincides with the opening days of baseball season.  I was watching the Yankees take it to the Blue Jays when the camera panned over the packed crowd at the standing bar above center field.  Did I see what I just did see?  Fortunately, I could use the PVR to go back a minute and freeze the frame.  I ended up taking a photo of the television set with my camera to be able to send along this picture.  Of course, it's really bad to rebroadcast in whole or in part any major league baseball game without written permission.