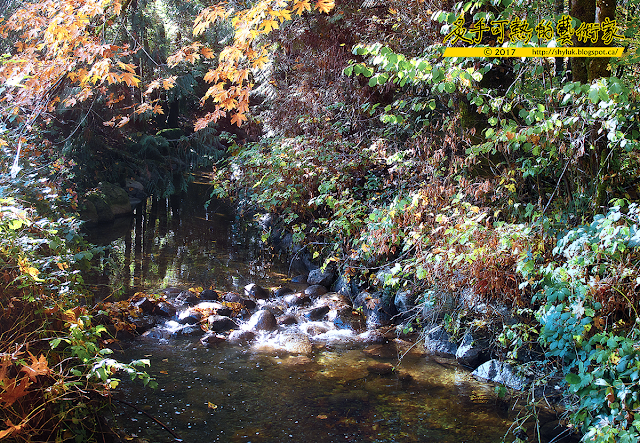 In late autumn, nearby Hyde Creek is loaded with fall colours.  A tickertape parade of leaves fall from the trees to greet the arrival of salmon which have come to spawn here.

This is close to the same vantage point I used for my Hyde Creek artwork in JSVB Post #112, way back in May of 2010.  Please click here to see it! 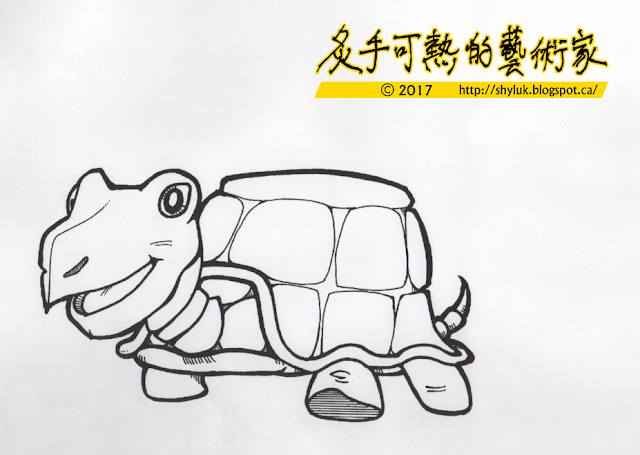 Query: How many more of these turtle drawings from 1995 will I post on JSVB?

Reply: How many more pictures do I need to adequately pad my post count?

Is today's JSVB Post all that bad?  I don't think so.  However, the picture of shelved holiday decorations does resemble a mass grave, so if genocides disturb you (they should), please do not scroll down.  Thank you! 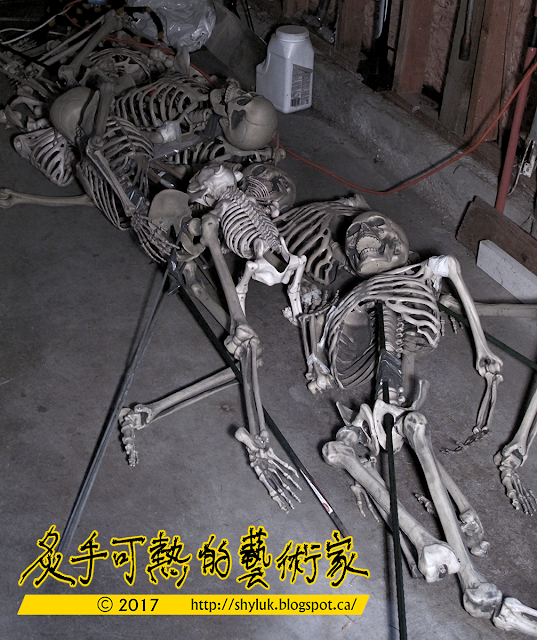 Hallowe'en this year was a massive disappointment - what a thing to say!  At midnight of November 1st, we grumpily tore down our holiday display.  We had a number of serious things to deal with, so we simply dumped our skeletons on the floor.  For a couple of weeks, this was how they lay.  I thought a picture of them might capture the sombre mood; even though they are just plastic stand-ups, these skeletons seem to have picked up on some recondite eldritch zeitgeist* of the season.

(*some recondite eldritch zeitgeist - please vote for this as the awesomest catchphrase of 2017!!)

Email ThisBlogThis!Share to TwitterShare to FacebookShare to Pinterest
Categories: You've Been Warned 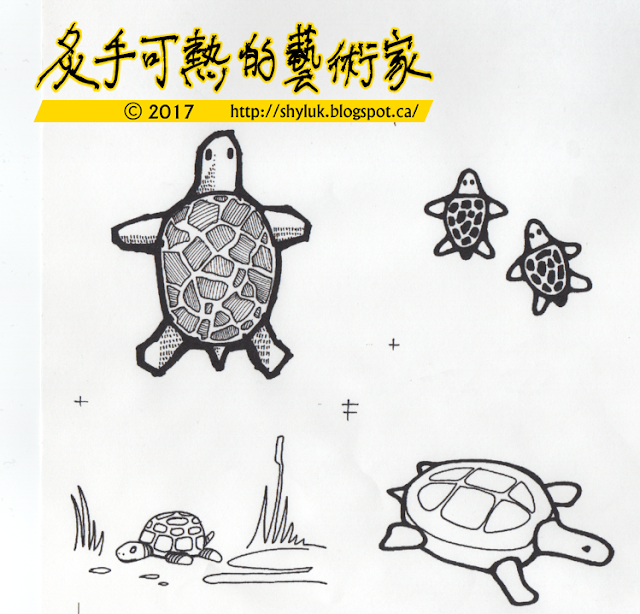 I guess in the 1990's I went through a phase of drawing turtles.  Over time, I've also had phases with robots, dogs, birds, spaceships, etc. 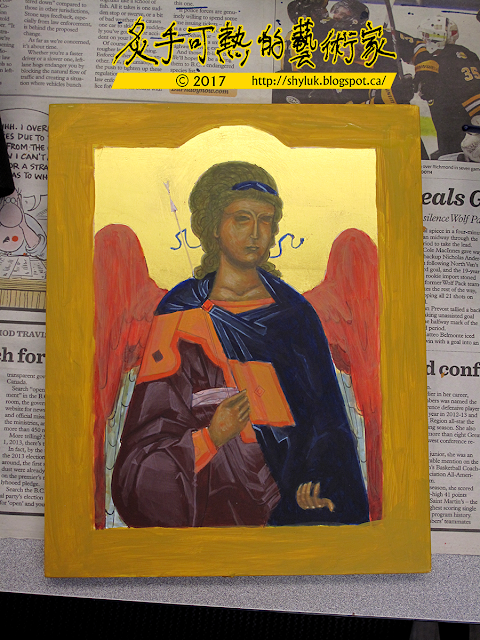 White is a stinkeroo choice for acrylic paint.  While it covers fairly well, if you mix it with another colour, you get a chalky look that sometimes ends up being streaky. 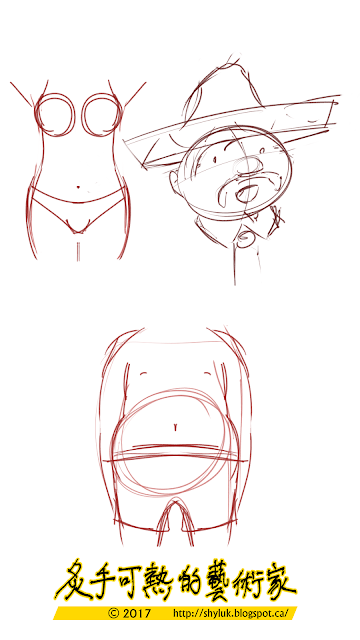 The thirteenth day of every month I try to feature my Ungood Art on JSVB.  Ungood Art is some version of a project I am working on that started off with the best of intentions but somehow the artwork went awry.

This bit of unfinished artwork has a long history with unhappy associations. I've hung onto it for a while before deciding to catalogue it with my JSVB Ungood Art file.

It was going to be a comedic documentary piece about the supernatural effects of red underwear, something that I know very little about but apparently is a strong belief in equatorial locations around the world.  Specifically, as you might judge from the stereotypical sketch of the happy latino, I was going to look at the topic from the point of Mexico.  That's where I discovered the cultural mystery of red underwear: Mexican lingerie outlets were running out of red clothing on account of the solar eclipse.  Local belief was that wearing red underwear would ward off any evil effects of the eclipse on August 21 of this year.

So, being lazy on the subject,  I delayed working on this art piece since it was just for my own amusement and a provided chance to practice drawing using the dreaded Bézier tool in Photoshop (not shown in this version of the artwork).  I started drawing on September 5 or so, with the plan to publish on the 6th.  On September 7th and then again on the 19th, Mexico was heavily rocked by violent earthquakes that destroyed much property and killed many people.  Shocked and depressed by this coincidence, I decided I'd better not publish the piece, and I never finished the drawing.

Worse still, JSVB seems to be developing a track record for predicting natural disasters.  I drew a similar comedic piece involving an earthquake in Japan.  I published JSVB Post #296 (click here to see it) on January of 2011, and the massive tsunami hit in early march of that year, a little more than a month from my post.

Coincidence, yes, but I still can't help feeling rotten about that. This discouraging sentiment continues to dog me to this day. 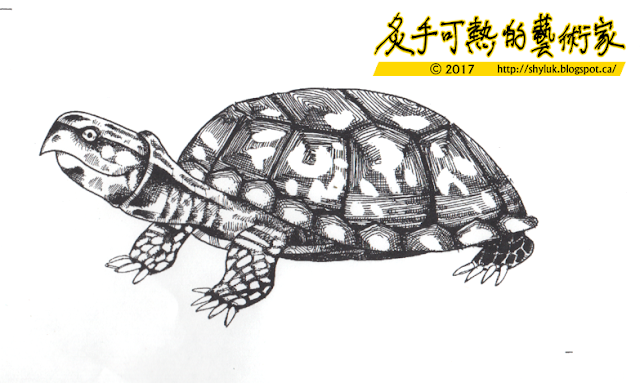 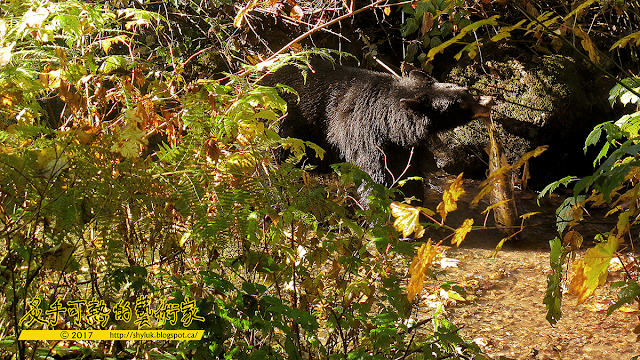 Walking through the forest, I revelled in how the clear sunlight poured down through the green and bronze leaves like wine from a decanter.  I doubly delighted in the simple wisdom of remembering to bring along my camera.

Salmon make busy, sinewy water splashes as they spawn.  When I hear that sound, I go to the creekside to see what the fish are doing.  Sometimes, I'm not the only one attracted to the salmon.

This bear was as far away from me as you'd be from your television set watching a movie at home.  My camera doesn't have any special lenses, so there was no fancy zoom as I snapped a couple of quick pictures of this particular junior bear feeding on salmon.  Then both the bear and I chose to go our separate ways: the bear took the salmon and I kept my photos. 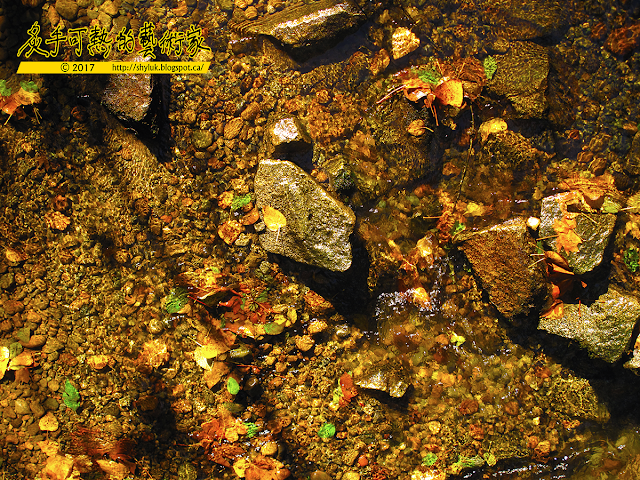 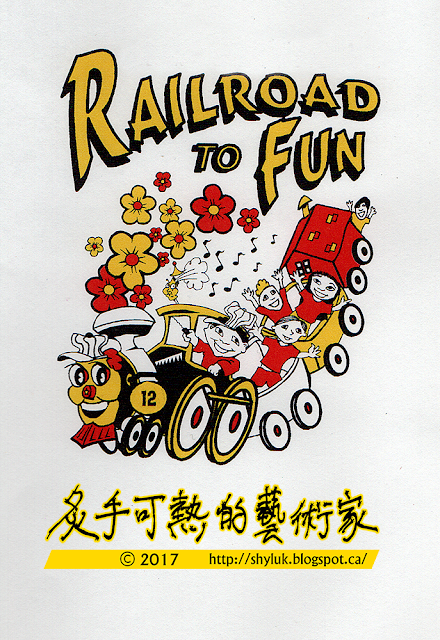 I pulled this art piece from my filing cabinet the other day, and gosh, it's twenty years old.  I can barely recall drawing this.  My style has changed quite a bit over time, and my methods and art media have improved a lot. 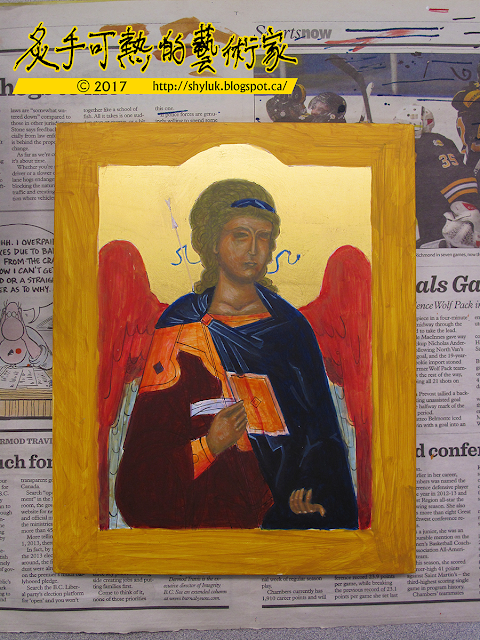 Digital painting, which I prefer, allows for the omnipotent Undo command.  Real painting does not allow that.

There are two ways of correcting mistakes.  The first is to take a clean brush loaded with water and try to mop out the error before it dries.  A wet fingertip will work if the mistake is fresh.

If that doesn't work, a mistake must be painted over, disguised, or cleverly incorporated into a new design.  There's a story about an artist who made the mistake of wearing his best formal shirt while touching up the piece he was going to present at a party: he splashed indelible ink on one of his pristine cuffs.   Rather than try to wash the ink out - there was no time anyways - he took a pen and drew damask designs on both of his cuffs and his collar to cover up the stain.  The artwork was well-received and his shirt was the hit of the party.  It's like a Mentos commercial!