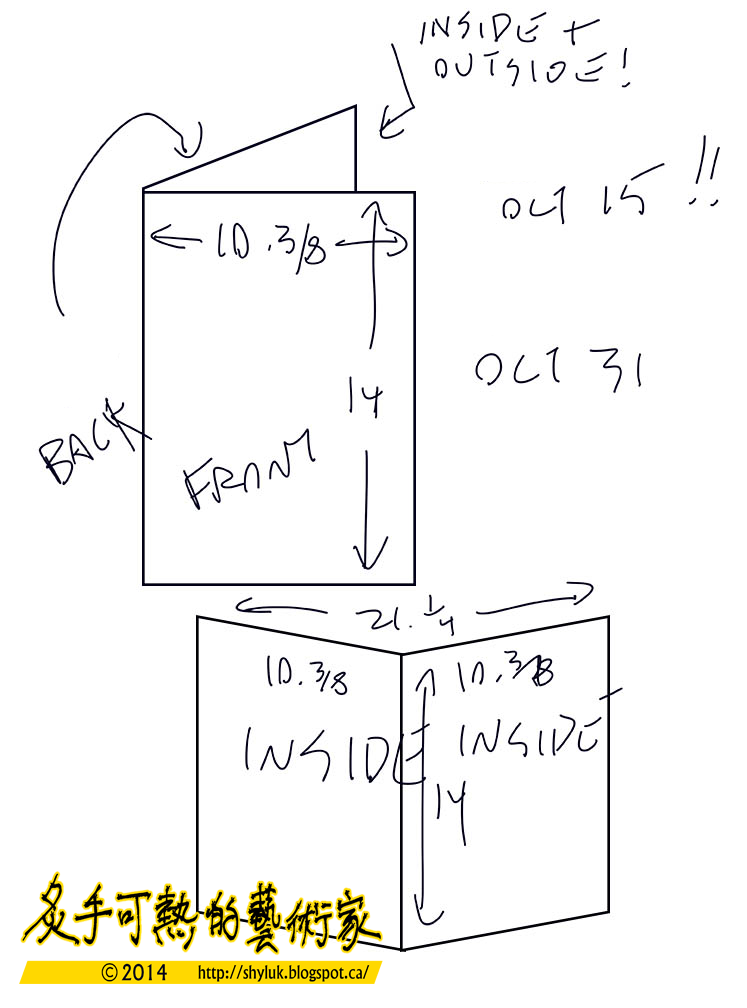 This is a thumbnail sketch for a new project.  You'd think that my handwriting has gotten worse like everybody else who uses a computer, but really it's always been very bad. 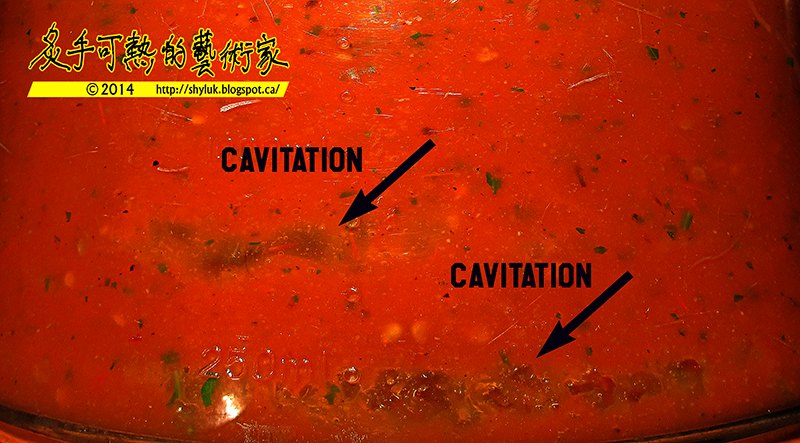 Photography using fast shutter speeds fascinates me. There are physical issues like getting the shutter to move fast enough as well as lighting considerations which are interesting on their own.  But what gets me is that you can take an image that's 1/5000th of a second and know not only that this moment was unique among five thousand other images in that single second, but that the moment could also be broken down another 5,000 times, or 5,000 multiplied by 5,000 times more than that.  So much goes by in our lives that we never perceive without some form of electronic assistance.

In this case, I've captured cavitation bubbles in some alder-smoked tomato soup I made for my wife.  These bubbles are formed in the liquid due to the rapid movement of the food processor blade.  The blade moves so fast its pressure upon the liquid forms a cavity: a tiny void space that collapses in on itself in less than 1,000th of a second.  The collapse sets up a pressure wave.  The waves compound to make vibrations.  Strong vibrations create undue noise and can wreck machinery.  Underwater propellers like those found on boats or submarines will have designs that reduce cavitation.

In the case of tomato soup, cavitation helps break up bits of food that aren't smooth.  My wife likes her soup to be silky smooth.  I add a little cream at the end to make it so. 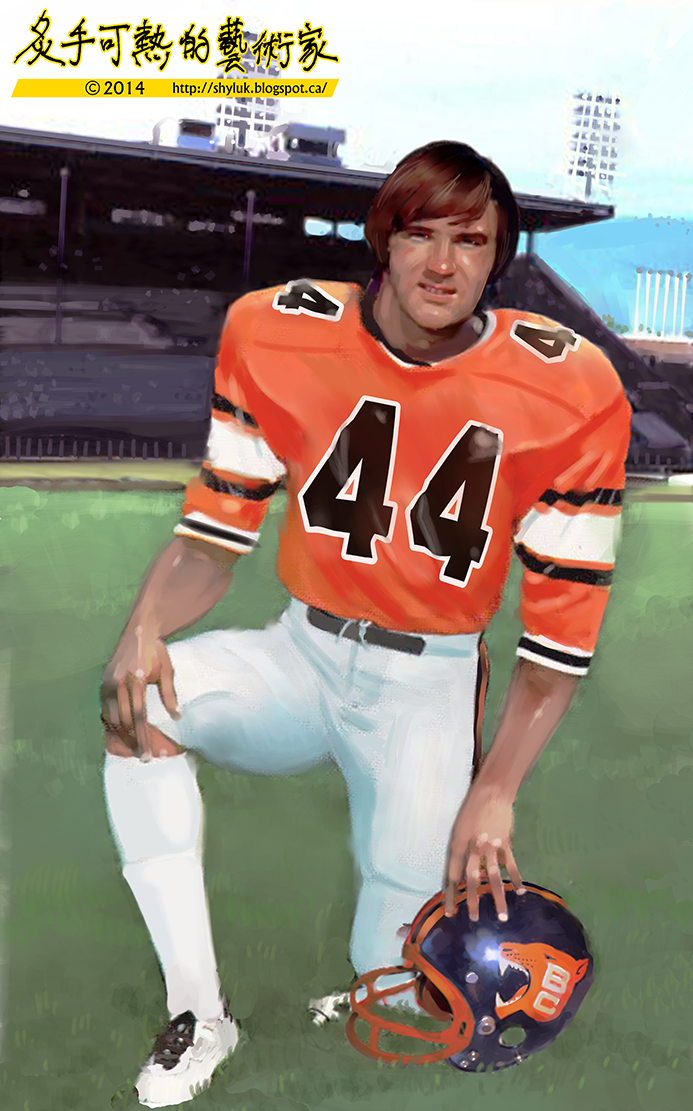 I want to show you a football player I've rendered today.  The original image is a combination of several sources Photoshopped together. Then I rotoscoped everything in Painter and then hand-painted in all of the detail.  He's part of a larger project which I will show on JSVB soon.

I'm starting a new Byzantine icon, my fifth.  It will be the Nativity scene: Jesus, Mary, Joseph, a couple of animals, and a manger.

Look at these happy fools, so smiling and eager to get started.  Never mind that half of them are missing in action already, felled by a pernicious rhinovirus. Be sure to tune in to JSVB around Christmas, when these icons might be finished... I hope.  Well, I will post weekly updates, and continue to show whatever other project work I have on hand. 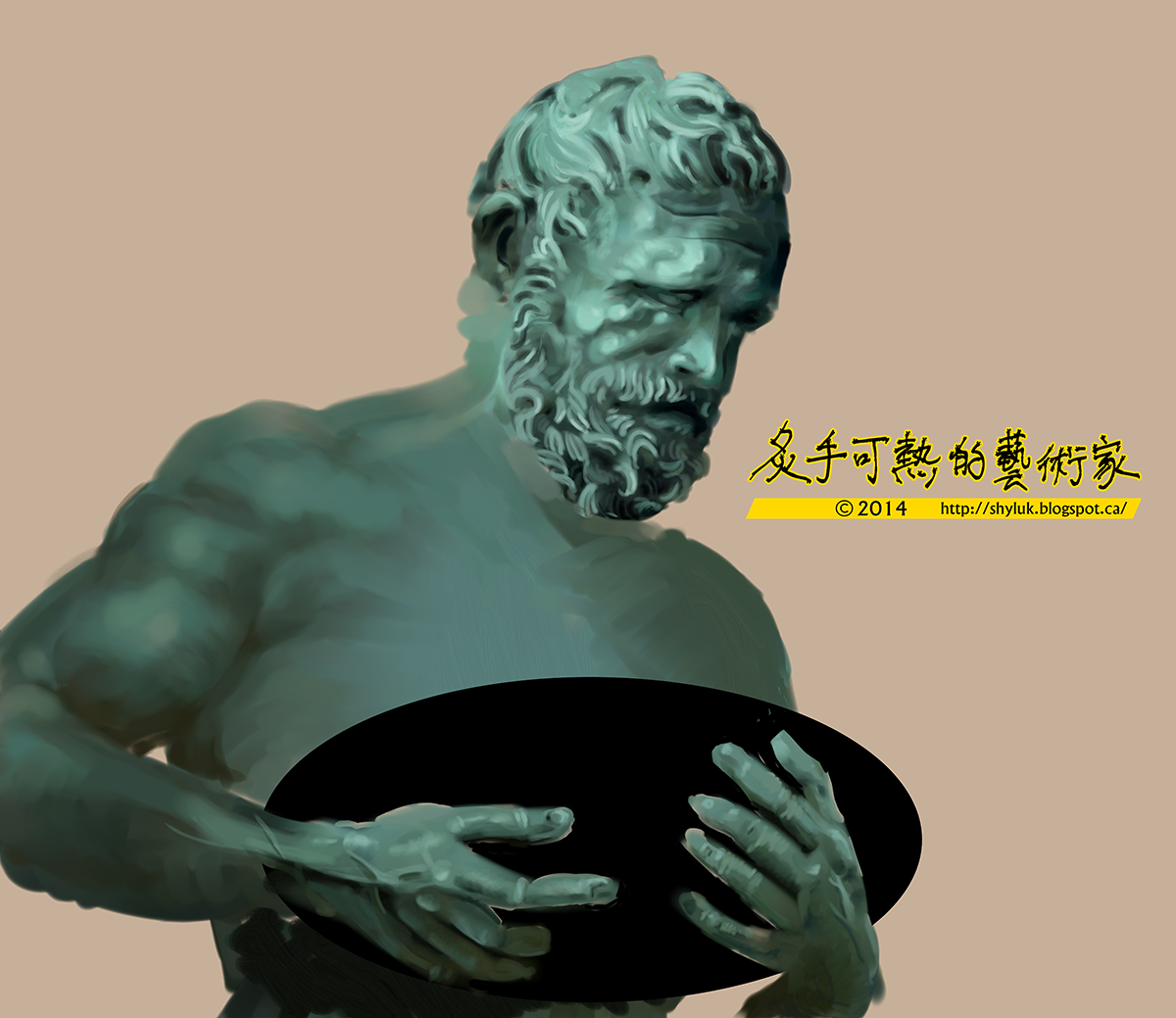 Here's some more work on my dour green guy.  There's three layers: head, torso, and hands.  If you look, you can see where they need some blending to make them fit without seams.

He's holding a black disk since that's on a fourth layer.  Without the disk, it looks like the man is grabbing at his own chest.  The disk is a placeholder, but what's coming is awfully grim.  After I render that, I'll be able to fix all of the parts of the fingers that aren't yet working.

That, however, is a story for another day, as I will have some other stuff to tend to soon. 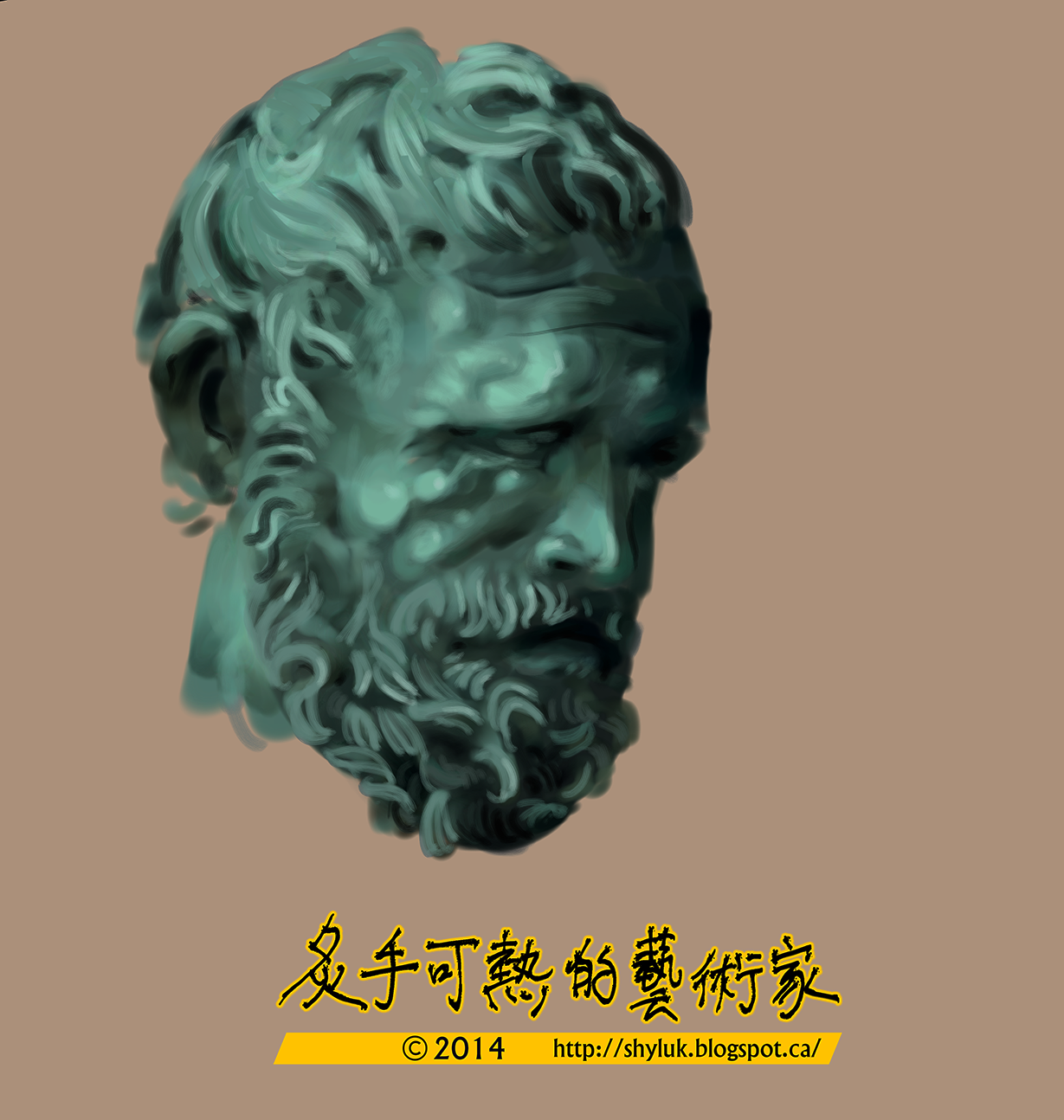 Today on JSVB is a green head rendered in as close to the Classical style as I can go and yet still work quickly.  I don't have a strong understanding of the Classical facial musculature, but I do have many sources to look at and a few years of experience gazing at Byrne Hogarth instructional books.  Maybe something from all that has started to sink in. 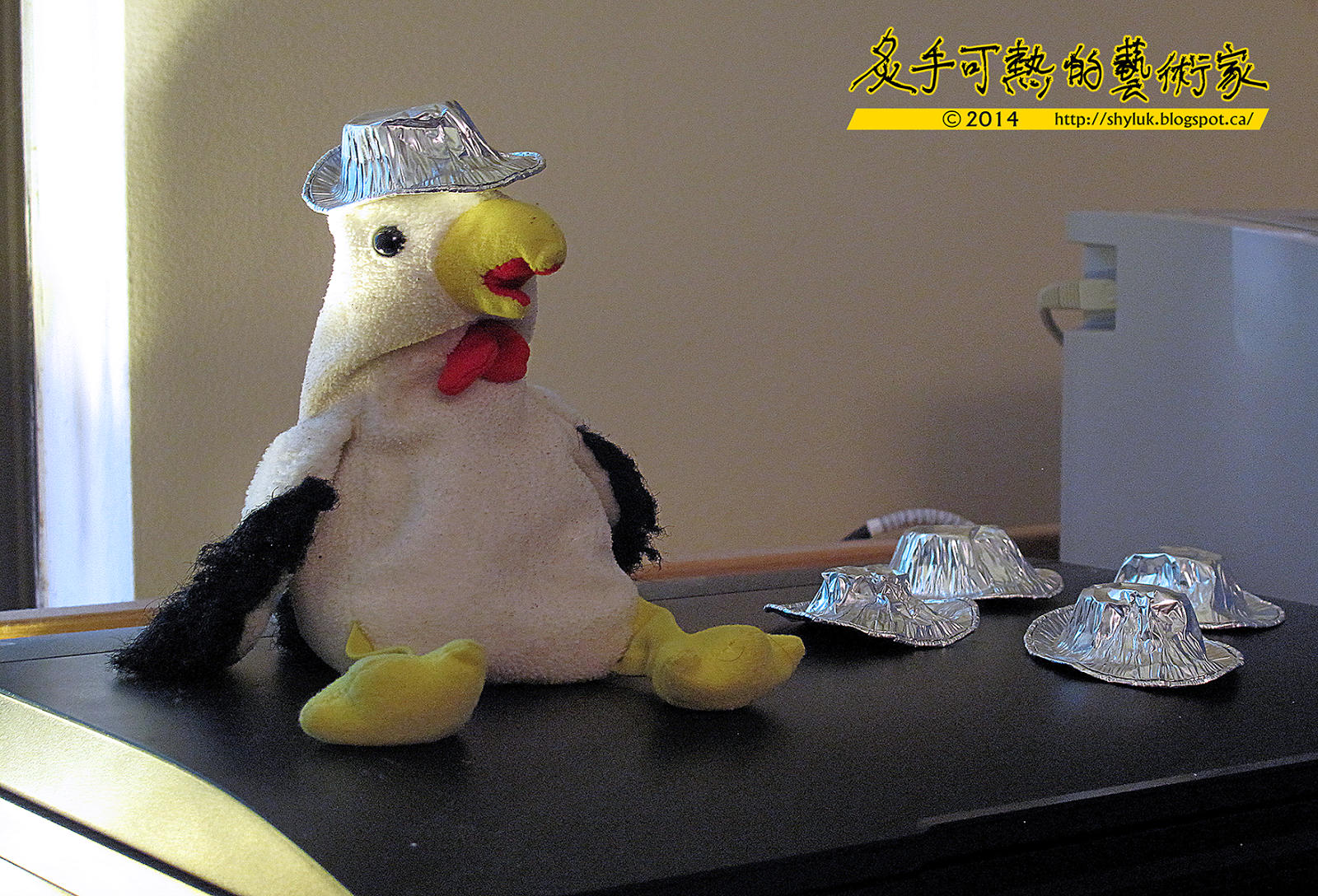 "Tindy... why is the floor moving?"
Tindiana Pullet was protected from the thought beams of the mind-control satellites in geosyncronous high Earth orbit, thanks to his tin foil fedora.

Welcome to another edition of JSVB Ungood Art Day, where I show art which I have created with the best of intentions that somehow spun out of control and crashed.  The thirteenth of every month is traditionally Ungood Art Day.

My wife was eating these tiny fruit pies and leaving behind little bitty foil cups.  Once washed, I realized that a cup could be formed into the shape of a hat, a process from the olden days known as "blocking".  The hat was a good fit for one of our toy stuffed chickens, and so we get Tindiana Pullet And The Empire Of The Crystal Cliché.
To the right you can see the first four tries I had at making a tin foil hat for a chicken.  Blocking hats isn't as easy as you'd think.  If you look at Woody Allen's early comedy material, he makes observations on how difficult it is to block a hat, and he was right!  If you look at Woody Allen, you see how old he is, and how he would have lived through the era where blocking hats was an important and manly skill to have.
This JSVB Entry is by Jeff Shyluk at 11:14 AM 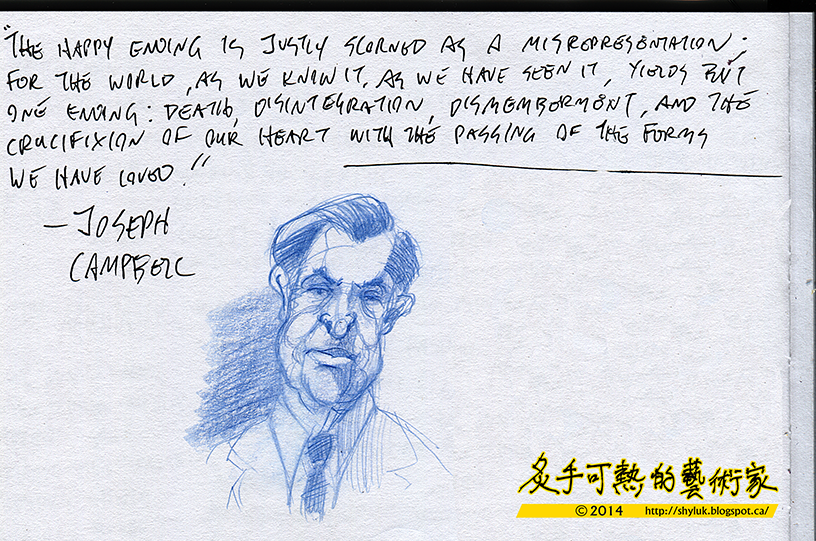 From my sketchbook, a quotation from Joseph Campbell's book "The Hero With A Thousand Faces".   I can see this as the flagship for a whole line of Hallmark-style greeting cards, except that I don't have the rights to any of it.

For those who can't read my handwriting:

"The happy ending is justly scorned as a misrepresentation; for the world, as we know it, as we have seen it, yields but one ending: death, disintegration, dismemberment, and the crucifixion of our heart with the passing of the forms we have loved."

As a bonus, I've included a caricature of  Mr. Campbell as I imagine he would have looked phrasing those words.  Since nobody else seems to be caricaturing Joseph Campbell, I figured JSVB might as well be on the cutting edge of that artform.

JSVB does reader requests.  I greatly prefer if they are backed by paying customers, but if a request doesn't take me far out of my way I'll do one for free.

Recently, a loyal JSVB reader who wishes to remain anonymous thought that my blog would be a lot spicier if I had some pictures of dirty hose.  As it happens, the other day I dug up about a hundred feet of soaker line that has been buried in the back yard cedars for maybe a year and a half.  As you can see, there can be no hose dirtier than this! 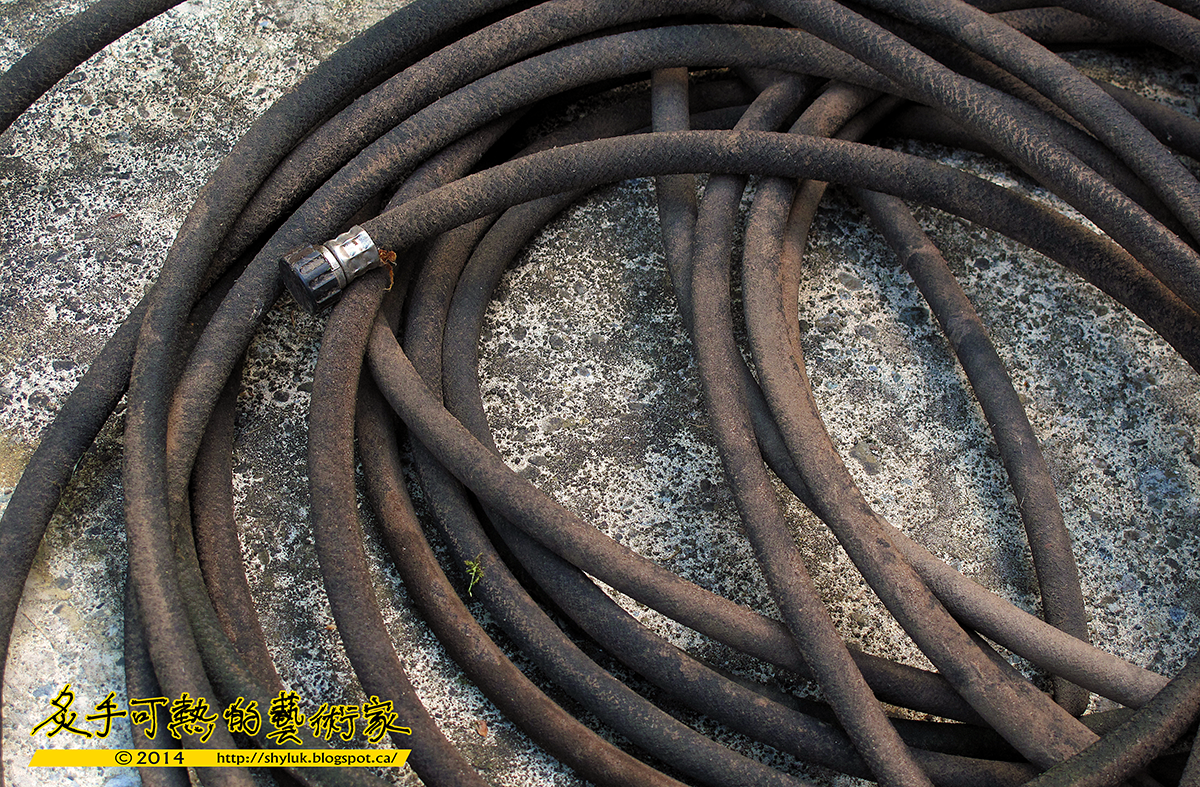 You also might be interested in my JSVB Naughty Schoolgirl picture.  You can see her by clicking here. 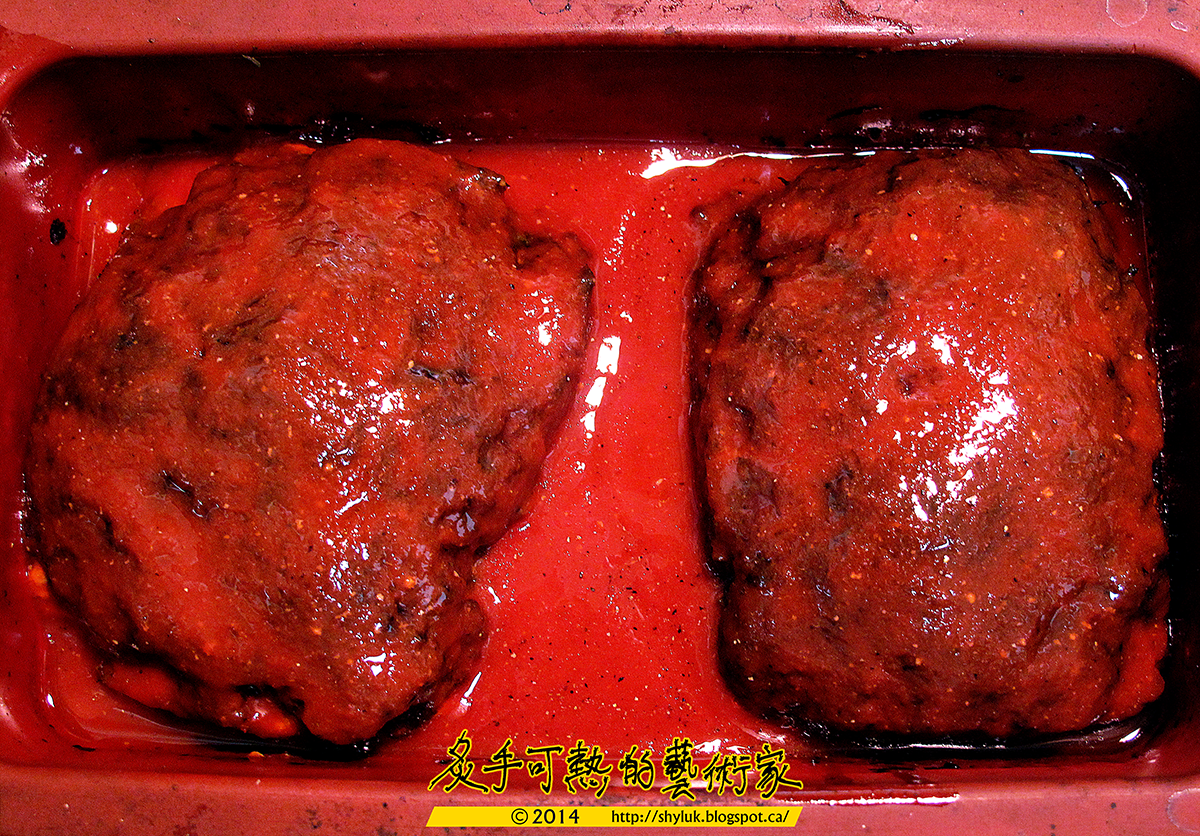 I put a pair of small meat loaves in my smoker barbecue, and smoked it all afternoon.  I used a silicone bread tray, since it's oven safe.  At the end of the run, the tray contained about a half-cup of meat juices infused with magnificent smoke flavour.  I combined the juices with a little stock and some tomato and wine to make a killer smoky red sauce. Food for carnivores! A an accidental glance at a local newspaper showed to me that today is the 37th anniversary of the launch of Voyager 1, the man-made object that is farthest from Earth.  Today, it's 19.3 billion miles from us, more or less into interstellar space past the outer boundary of our solar system.

Nothing embodies the boldness of deep space travel like a hot bald-headed woman in a skimpy outfit, which is why I drew this today.  The girl with the glowing throat is Star Trek's Lieutenant Ilia, who features prominently when our Voyager probe unexpectedly returns to Earth in the year 2270.

The Ilia character first appeared on Earth-style movie screens back in 1979.  I wasn't even a teen-ager by that time.  While the events in the Star Trek motion picture were futuristic, in our universe at that time the real space probe would have been pursuing its slingshot trajectory around Jupiter.  Today, Voyager I is nearly 129 AU's from Earth (an AU is an Astronomical Unit, measured as the distance from the Earth to the Sun.).

Who knows where Voyager will go, for how far or for how long.  Or if it will ever be found again... 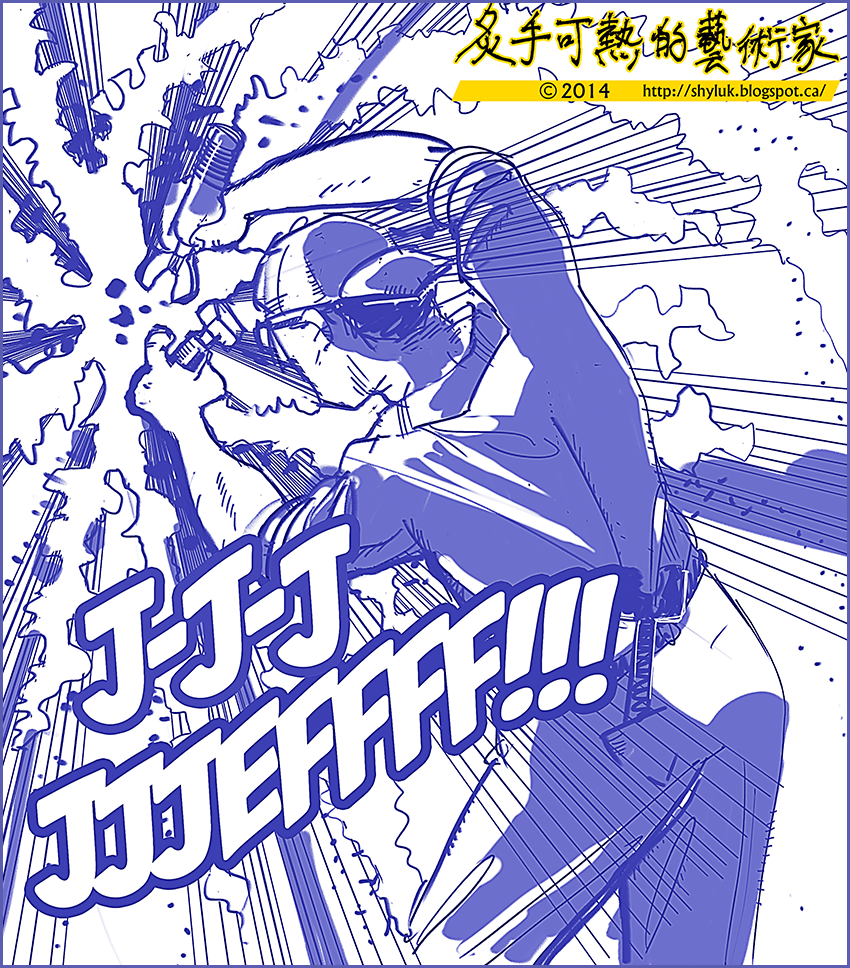 Yesterday, I had to fix something.

Since I didn't have a camera with me, I drew a sketch to commemorate the event.  I'm pretty sure this is close to how it must have looked: Man pitted against his eternal and implacable foe Machine.  Sparks and plasma  arc through the sky like fireworks.  The burnt air reeks of ozone and male sweat.  Millimeter by millimeter, the degenerate forces of dilapidation give way under my determined assault.  I complete the repair.  My work is done.

Well, it's a good thing I didn't have a camera.  I was repairing a wall-mounted light switch.  And although that brought me to my limit of ability with home restorations, after I finished my work I discovered I had repaired the wrong switch.

So I will stick with the heroic version.  I don't know what tools I am using in the picture, but hey, does it matter?  Look at the cool way I use my own name as a sound effect!  Sometimes, it's really great being an artist.