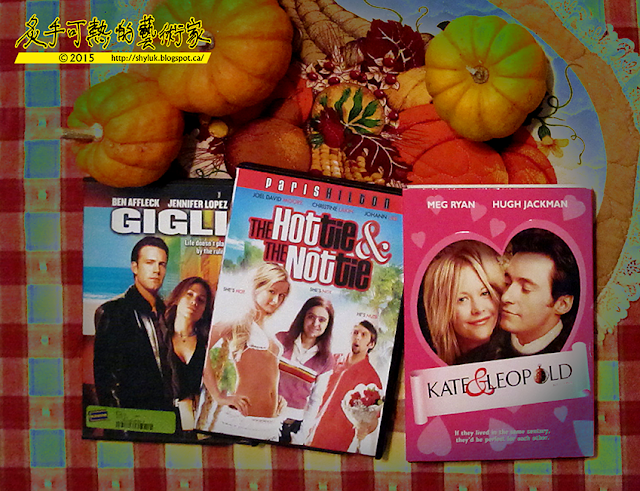 The topic of discussion ran to what three films would make for the scariest Hallowe'en viewing.

Three things are scary about this trio: 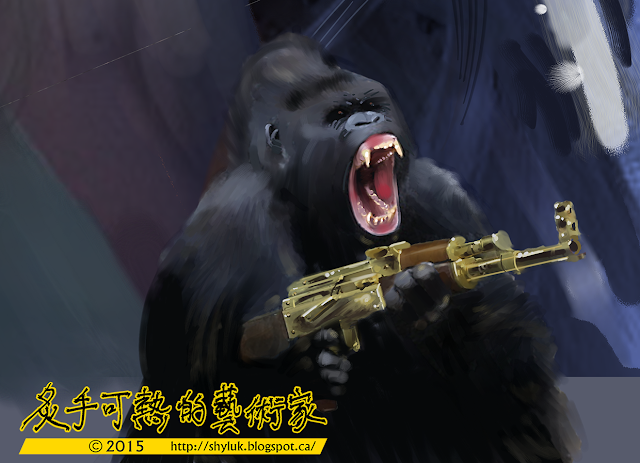 Irwin Donenfeld, the son of the founder of DC Comics, was the first to notice that when an ape was pictured on the front cover of a comic book, the sales of that issue would spike dramatically.
So now I have a gorilla I drew.  There's a few things wrong with it.  For one thing, it's a gorilla and not an ape; I don't know if that makes any difference for primate appeal.  Another thing wrong, morally anyways, is that the gorilla has a gun.  A golden AK-47, to be precise.
I had no idea that gold-plated AK-47's were a thing, and was dismayed to find that they are in demand.  The most infamous are the dozen or so commissioned by Saddam Hussein's family, which have since disappeared.  Still, if you really need a golden gun, Versace will sell you a gold-plated AK-47 for $9,000.  A little overpriced for a gun you'd likely never fire and then just leave on a shelf somewhere.
Unless, of course, you happen to be a gorilla soldier.
This JSVB Entry is by Jeff Shyluk at 11:11 PM 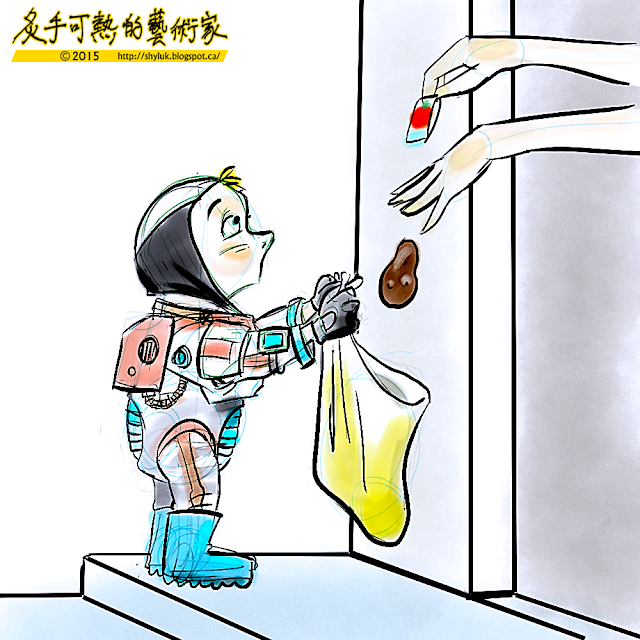 This Hallowe'en, any kid that comes to my door dressed as Mark Watney gets a potato and a packet of catsup.

Although, really, it would be super-cool to be Mark Watney for Hallowe'en.

Still: potato and catsup, no exceptions. 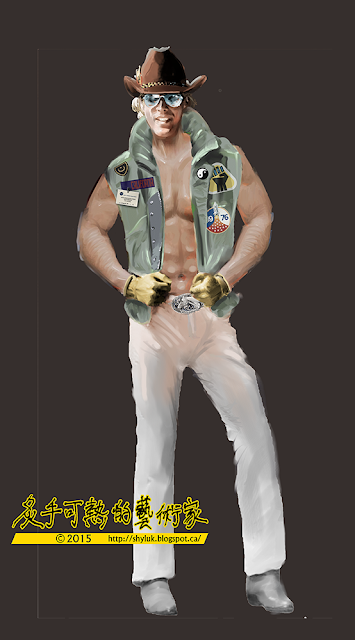 I am starting to believe that the honour of my JSVB Post That Just Won't Die Award will go to The Fashion Cowboy.  This is my third try at documenting him, and I really don't know why he's so ready to be drawn.  He's completely not my type.

The background is a placeholder, which is why his edges are so rough.  I composited him out of a number of references, some photographed and some drawn.  Then, I painted over everything in a hurry to get it done.

If you dare, see the original Fashion Cowboy way back in JSVB Post #120 by clicking here.  I'm amazed that a five year old sketchbook figure has so much traction. 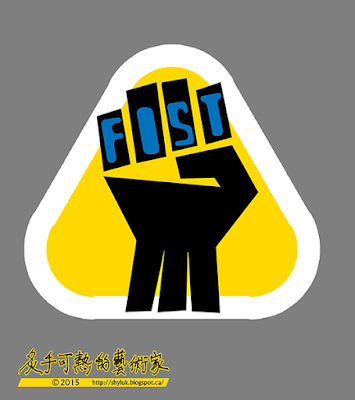 Are you the arch-enemy of all that is good and decent, and also happen to be the fearsome leader of a mysterious international cartel?  Do you need a logo?  As long as your nefarious organization is called F.I.S.T., then please feel free to use this logo I have just designed.  Your cadre of evil lawyers can probably win the lawsuit required to register this piece.

I thought it would turn out better, but since it's just a quick concept I don't feel the need to substantially improve it, either.

The artwork is based on a clenched-fist logo used by Howard Stern in 2005.  In turn, his art department likely copied the famous Berkeley protest fist woodcut designed by Frank Cieciorka in 1965. 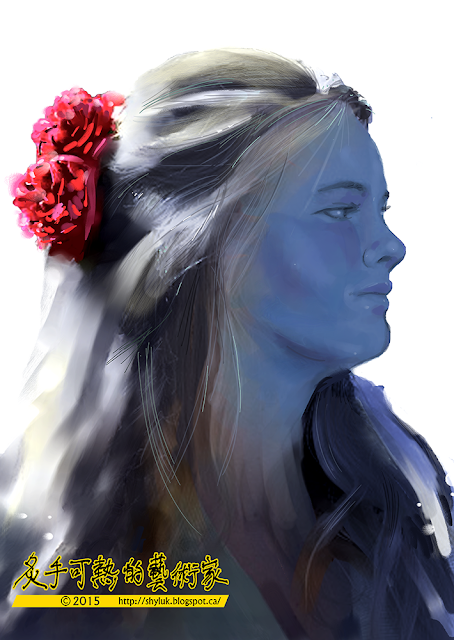 This is an iterative piece, meaning that I intend to put this portrait into another, larger work of art as a compositional element.

Still, as an exercise in palette control, I think it turned out well.  It seems good enough to be able to stand on its own.  The whole left side seems a little unbalanced, though, with the vivid flowers and the very unfinished hair.  I will fix that later. 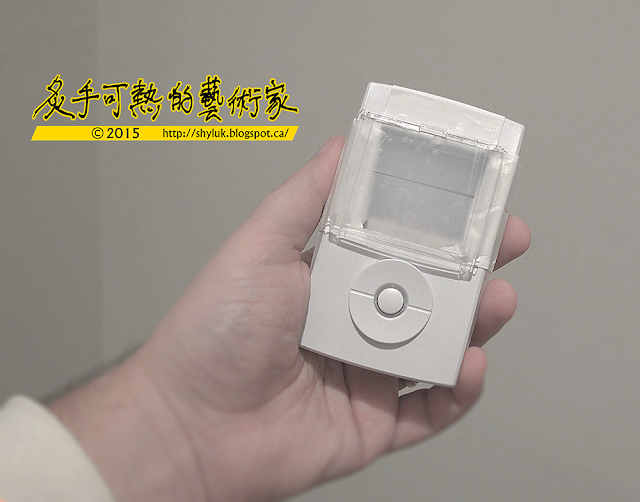 Turns out even I can make a homemade iPod.  In your face, dead guy Steve Jobs! 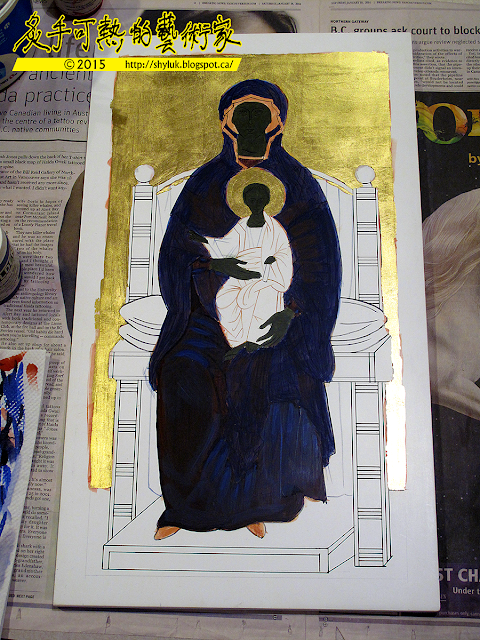 I've blocked out more colours on my icon. I've carefully separated out the red clothes from the blue robe.  Or is it the other way around?  Somehow, I've  created red highlights on blue cloth and blue highlights on red cloth and it all looks like a dark cloud.  That's all right, though.  The darkest colours  will form the shadows.  All the lighter colours will lay on top of them.  You'll see!
This JSVB Entry is by Jeff Shyluk at 9:21 PM 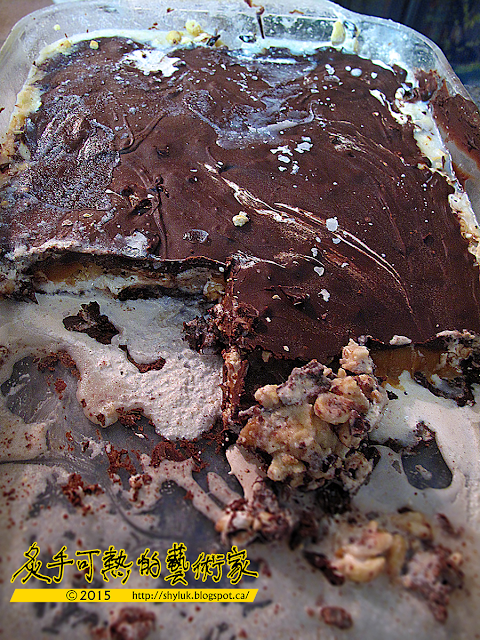 Hello and welcome to Ungood Art Day on JSVB.  Ungood Art is a collection of projects that I have attempted that started out well and then for whatever reason failed, and sometimes that failure is spectacular.  Ungood Art Day is the 13th of every month on JSVB.

I like to cook, and generally I'm pretty good at it.  Every once in a while, though, a dish goes awry.  For the first time, I'm including a finished dessert as Ungood Art.

What I wanted to do was try a variation on the popular "Sex In A Pan" dessert, so named that way because the dessert is at least as good as sex.  What I got was more like a rampaging bacchanalia in a pan.

Cooling the dessert turned out to be its undoing.  I guess there were liquid-y parts trapped under pressure between the solid chocolate layers.  Cutting the thing into squares turned out to be impossible.  The servings came out in awkward chunks.

The worst part, though, was that putting a knife into the dessert caused a fair amount of milky fluid to erupt from the sides of the thing and spatter all over the top.

"Seamy," commented one of my friends, choosing the precise word to describe the gooey discharge.

Then, as you can see in the picture, a flood of white secretion oozed out from the bottom of the dessert.

Look, the whole confection tasted great.  It's one of the best tasting desserts I have ever made.  But presentation counts for high marks in the culinary arts.  A few of my friends refused to eat it based on its... seaminess... and the one most squeamish refused to be in the same room as the pan.  Thank goodness for my brother-in-law who unselfishly took the remains and finished them off in the comfort of his own bachelor pad.  Giggety, giggety... giggety goo. 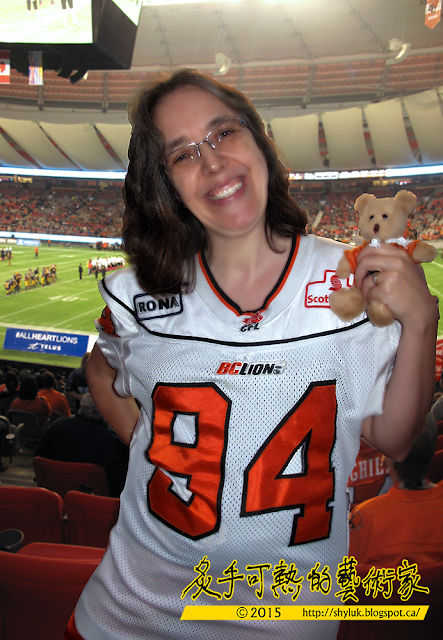 Here's a picture of my wife wearing the jersey from football player Khreem Smith.  It's a real game-worn uniform complete with grimy spots, tears and mends, and some tailoring to make the shirt sit correctly over body protection.

It turns out that Mr. Smith is six inches taller than  my wife. Even so, the jersey fits her better than it would fit me: she's svelte.

I'm going to wish my wife a very happy birthday a couple of days early.  Her birthday falls on Ungood Art Day, but I believe I'll be too busy to blog for the next few days.  I'll post for Ungood Art Day retroactively in the next while.  I know my wife wants to see this picture, so I am posting it now.  If you see this in time, make sure you congratulate her on another trip around the sun, and please to note how every year she seems to be getting younger.  I mean, check out this picture.  That is one young, young birthday girl! 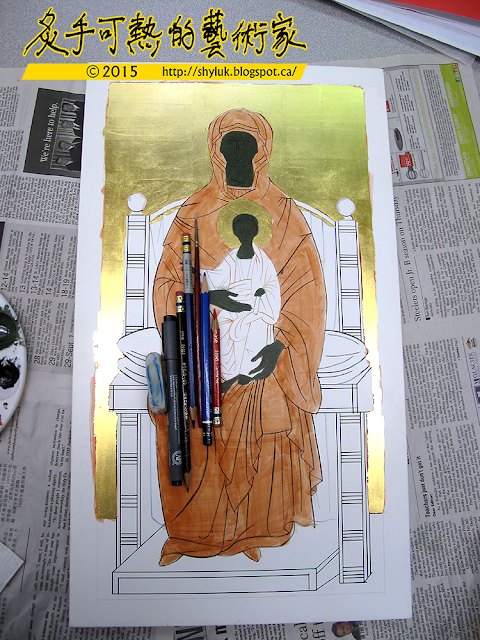 Slow progress on an icon is still progress.  The gilding turned out reasonably well.  There's a number of rough edges, but those are easy to repair.

The dark green represents the darkest shadows of the skin tones.  I've also blocked out the robes with a wash of burnt sienna.  While the robes will be red and blue, neither pigment lays down very easily, so a base coat will knock out the white and make the dark parts of the cloth be shadowy and deep. 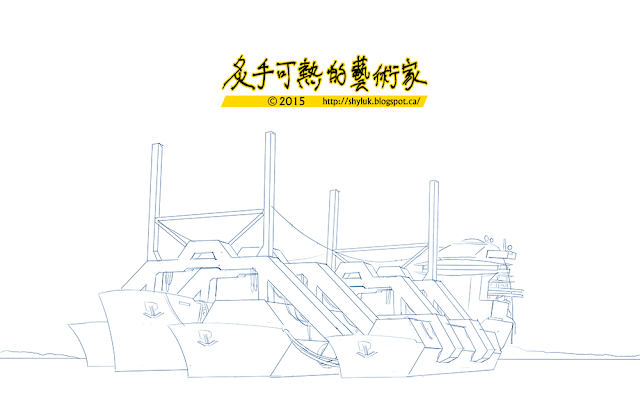 This is a pretty good drawing, but the design has gotten out of hand.  It's sketchbook fodder.  Still, there are things I like about it that I might use in something else in the future.

On again - off again work on the shipping lines of the future.  I'm retrofitting an older Panamax freighter with cargo pontoons in a tri-maran configuration.  Pretty snazzy, huh?  It would never fit through the Panama Canal, not without shedding the pontoons. The sketch needs a lot more work before it is done, but it's just a sketch so it should go quickly.