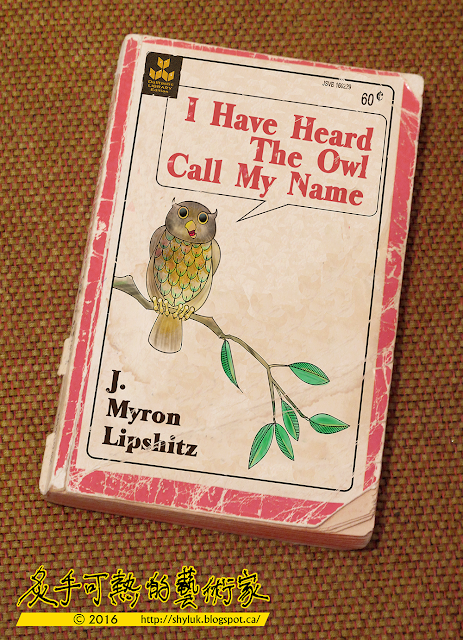 Yesterday's post, I mentioned the book "I Have Heard The Owl Call My Name".  I intentionally mis-attributed authorship to one fictional J. Myron Lipshitz because, hey, hearing an owl call that name would really be something.

"I Have Heard The Owl Call My Name" was in fact written by Margaret Craven, a name marginally more likely for an owl to pronounce.

It's an musty story about a white minister and an old First Nations village.  While the topic of cultural clash is important, the setting of the book strikes me as powerful and evocative unless you are a frequent rider of the BC Ferry system, in which case you would have seen the book a dozen times from the comfort of the Starfish Deck.  Written well before the residential school scandal of recent years, the book provides a very chilling yet unintentional glimpse into the darkest heart of the conflict between aboriginal peoples and our white government.  Other than that, it has not aged well.

So, I like the rare J. Myron Lipshitz edition much better. 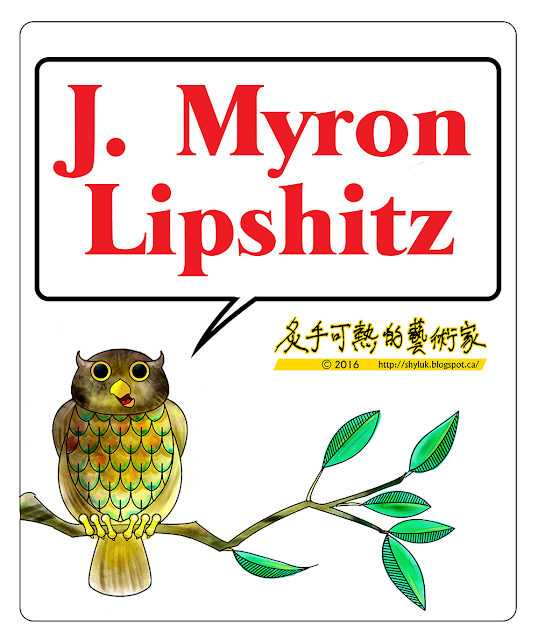 I was looking through a shelf of old used books and came across the dusty title "I Heard The Owl Call My Name", which I recall being exposed to way back in high school.  I was staggered that the author was J. Myron Lipshitz.  If the owl is calling your name and your name is J. Myron Lipshitz, that's some bird you've got there.

I would have figured if you were hearing the owl call your name, you'd have to be Naturally Who, the first baseman for Abbott and Costello's baseball team.  Who? Who!

Email ThisBlogThis!Share to TwitterShare to FacebookShare to Pinterest
Categories: Brush Line and Inker, Jeff's Life (As We Know It) A couple days ago, I started work on an owl illustration.  While somewhat more lifelike, my previous try at drawing an owl lacked the symmetry I was craving.  This owl is much more symmetrical, although it's not finished.  I'm too bummed-out to work on it much.

Still, this owl has the appeal of a statue, maybe like the Maltese Falcon.  I dedicate this statue to all of the inept Ashleys i know - not my cousin Ashley who is very smart and able to do many wonderful things.  I am thinking of the Ashleys whose contributions to the world have succeeded in keeping it from being the utopia we've all been striving for.  Thanks to their tireless efforts, we can now tell the difference between blissful existence and our regularly scheduled dose of reality.  Here's to you, sweet Ash, wherever you are. 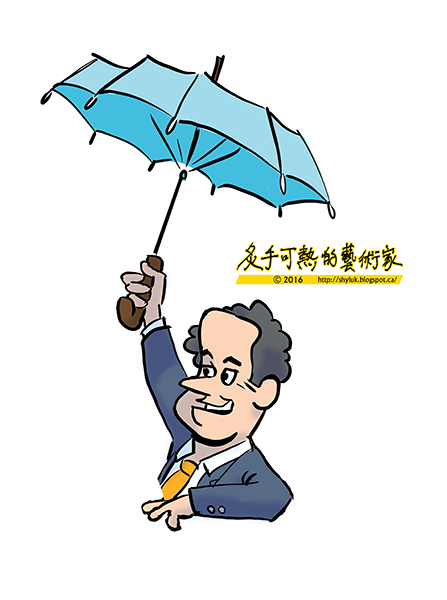 By coincidence, as I was looking through my political drawings, one of the people I've caricatured made the news.  His Honour Richard Stewart is the mayor of Coquitlam, near where I live.  For the past year and a half, he's been wearing the same slate-grey suit to work every day.  He wanted to make a statement on how we perceive male and female roles in society.  His idea was to wear the same clothes over and over again until someone noticed: he claims this took eighteen months.

This social experiment comes from Australia, where a news anchorwoman was chastised for wearing the same outfit on-air two days in a row.  Her partner then wore the same suit for a month, but nobody noticed. Obviously, a double-standard exists in the minds of television viewers.

I drew this caricature of Mayor Stewart a year and a half ago (but I updated it for today's JSVB post!).  He must have just gotten started on his project at that time.  In order to make the drawing look like him, I grabbed several reference pictures from the Internet.  He was wearing the grey suit and I sampled the colour digitally to make the drawing.

I only have two suits, one black and one white.  I hardly ever wear them, though.  I doubt anyone would notice one way or another.  I also recall a friend I had in school we all called "Grapes".  He didn't resemble Don Cherry, rather, he always wore a purple shirt.  One day I went over to his house and he showed me his closet, which contained twenty or thirty duplicates of the same purple clothes.  His father worked for a promotional company and one day he brought home a crate of purple shirts.  Grapes liked the colour, so he wore one every day.  Having been through various starving artist phases, I can relate to the economy and freedom from indecision that a closet full of identical shirts would bring.  Artists wear black, though, and I do have a fair amount of that in my bureau.  Nobody says anything if I wear black every day, unless I get dandruff.

Mayor Stewart was pleased with his suit.  It was a good colour for him to wear.  I know for a fact he's not pleased with this caricature, but since he didn't pay for it, well, here we are. 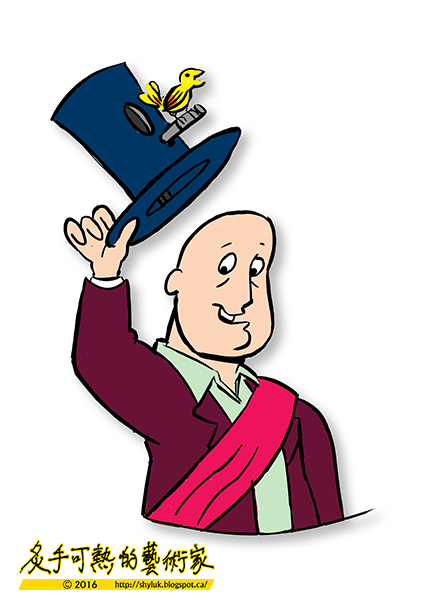 I've been going over old files, since now JSVB had quite a few of them.  I re-worked my mayoral image today. 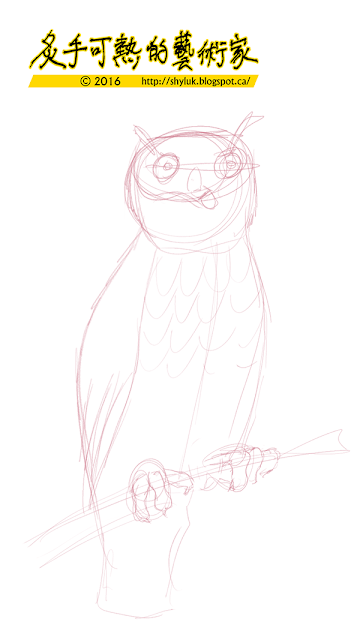 Now I have this owl sketch.  I need a finished illustration of an owl.  I'm torn between continuing this and making it painterly or starting another one which would be more abstract.  I think I might go for the latter.

There is no easy explanation for this drawing.  I'm testing whether or not I exist in the alternate universe where the things I render in my sketchbook somehow come to life.

The Star Trek stuff is the intellectual property of CBS.  Roadrunner belongs to Warner.

Email ThisBlogThis!Share to TwitterShare to FacebookShare to Pinterest
Categories: Geekdom Come, Jeff's Life (As We Know It), Sketchbook 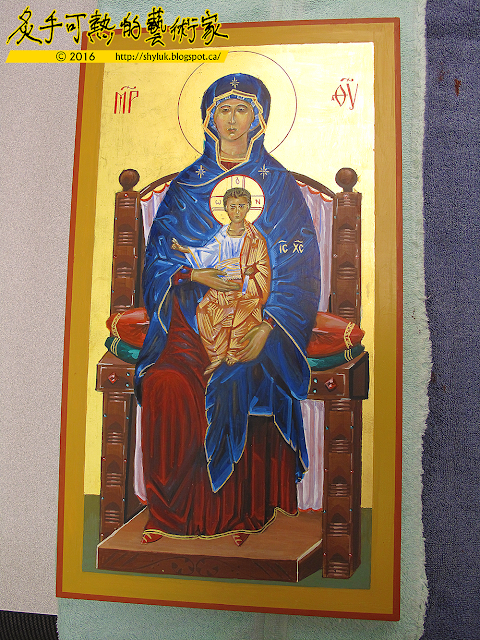 One nearly finished icon.  The painting, except for some tiny bits here and there, is complete.  It needs to be sealed and made ready for display.  That should be complete sometime in early March.

The thirteenth day of every month on JSVB is reserved for Ungood Art.  This is art that I have created that I thought would turn out well, but somehow it doesn't.

This month, I am presenting a new situation.  Earlier, I created some stuff that went so ungood it was genuinely bad.  I just don't want to publish it, and in fact I got rid of it.


Normally, I archive everything, so this was something I did not want to see again.  I think part of my problems started with watching the film Ex_Machina, which brought to mind the troubling problem of what to do when you absolutely hate the thing you've created.  You can read my thoughts on the subject by clicking here.  Without dwelling on the subject, there's still some part of that project that I feel could be salvaged.

That's why I created this picture instead, and put a fair amount of work into it.  Unlike most of my Ungood stuff, this one is pretty good.  I forced myself to use the Bezier tool in Photoshop to keep my lines crisp and uniform.  It's not an easy tool to use at first.

I've mentioned before that Season 10 of the X-Files has proven to be powerfully ungood (you can read my thoughts on that by clicking here.).  I've illustrated what I figure should be the high-water mark of the season: Scully and Mulder chase a reptilian were-human into a porta-potty.  It seems to me to be the most honest and compelling moment in the show.

Sometimes if you promote something ungood,  that's what people remember you for.  I guess what I will take away from Season 10 is the porta-potty scene.  But if I look back on this post, it will also remind me of the price of ungoodliness: you have to love what you do.  There's no sense making something founded on malice. 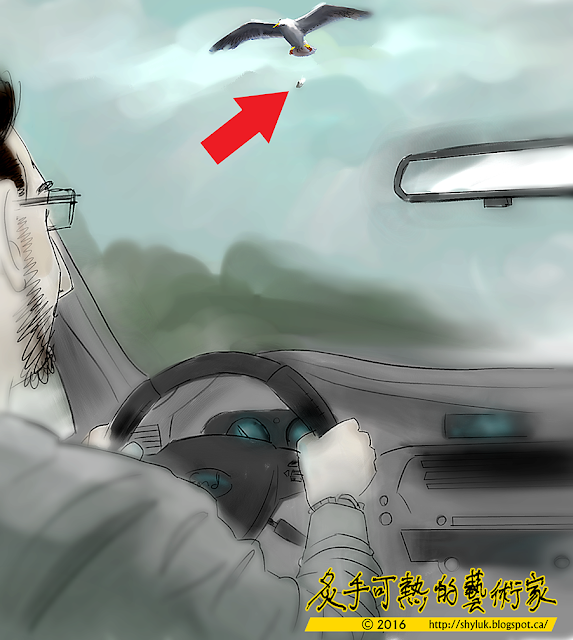 Sitting in traffic, my wife and I watched as a seagull flew directly up the middle of the road.  It judged wind and theta, the angle necessary to make a dropped bomb hit a target.  I could see the bird's eye look into my own eye.  Then it kind of wiggled it's flapply little legs, spread them wide, and unclenched.
Let's just say how pleased I am that Ford has been dragging their feet producing a Focus convertible model.

Email ThisBlogThis!Share to TwitterShare to FacebookShare to Pinterest
Categories: Animals, Jeff's Life (As We Know It) 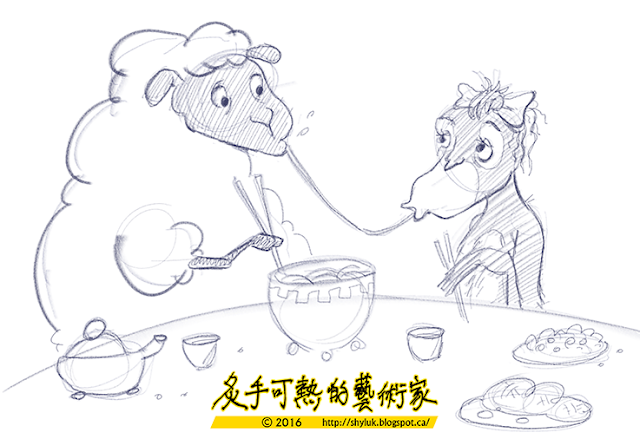 With regards to the Chinese Lunar New Year, I sure do love holidays that have feasts built into them!

Email ThisBlogThis!Share to TwitterShare to FacebookShare to Pinterest
Categories: Animals, Good Food, Jeff's Life (As We Know It) 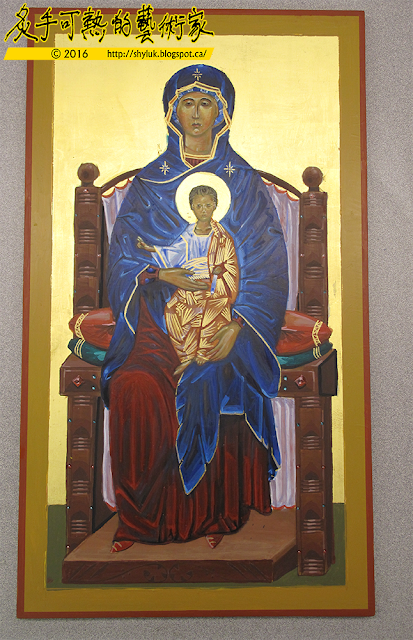 Gilding Day!  That's the day I lay gold assist, which is putting gold on areas that have already been painted.  Gold doesn't stick to paint, although it will stick to anything else you don't want it to.  So, gold leaf needs to be tacked down, gently.  It will be much more durable after sealing.

It's a shame that photography doesn't show gold very well.  It has a lustrous shine that looks exceptionally good under low light.  It brings out a nice contrast between the reds, blues, and greens in my icon without being garish.  I've also used it to create dazzling lines on Christ's robes.  I have it on authority that you cannot use too much gold for The Lord's clothing.  I used to have a gold tie in the 1980's.  Everyone made fun of it, but for good reason.  Some of us can wear lots of gold, others of us not so much.