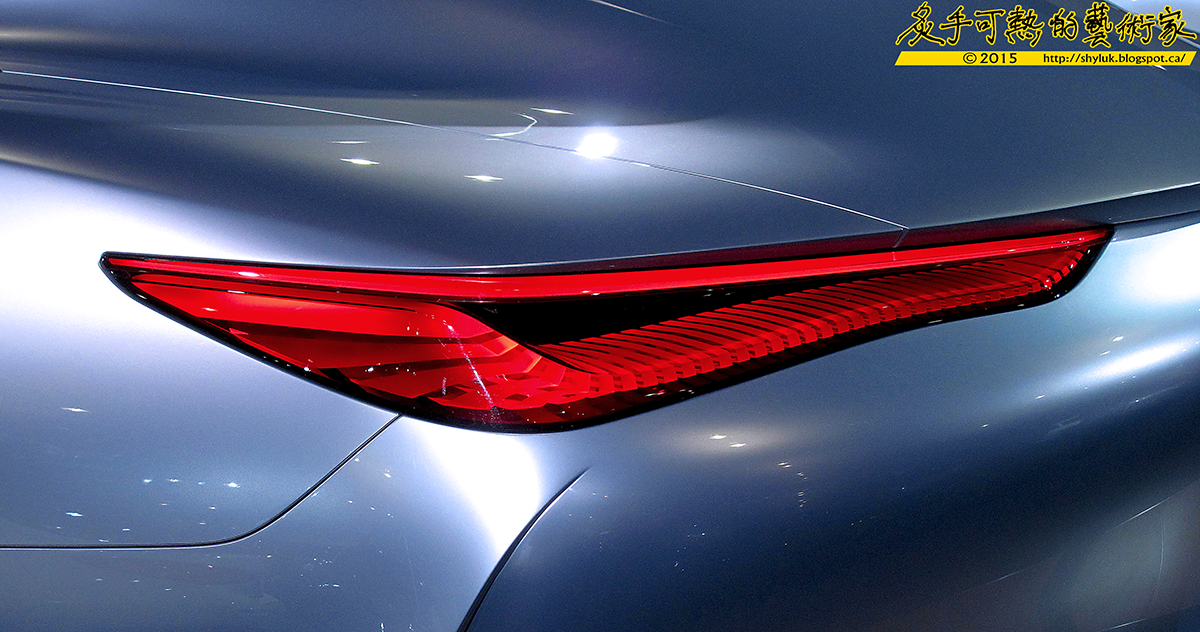 Another car show photo, and just a portion of a concept car.  Still, even this small piece conveys an incredible sense of speed and futurism.  Concept cars normally don't have even an engine, they just show off a sense of art style that the manufacturer may use to make their cars more attractive.
Whoever built this model was masterful.  Even at rest, every line of the car is built to show the flow of forward motion.  Perhaps most incredible was the paintwork.  The stylized panelling was covered with the most remarkable paint I have ever seen: it had a holographic depth.  It looked like you could dip your hand right into it.  I've seen pearlized paint before, but this was far beyond that.  I'm guessing the painters used some sort of lenticular laser etching process either on the paint after it was applied, or else they mixed an untold number of holographic beads into the paint.
The play of light on this car was unbelievably vibrant, which I tried to capture with this shot.  Seen in person, it was simply amazing.  I was later told that special technicians wearing custom-made gloves handled this car into the show, and that the representatives were expressly forbidden to touch it, let alone anybody from the public. 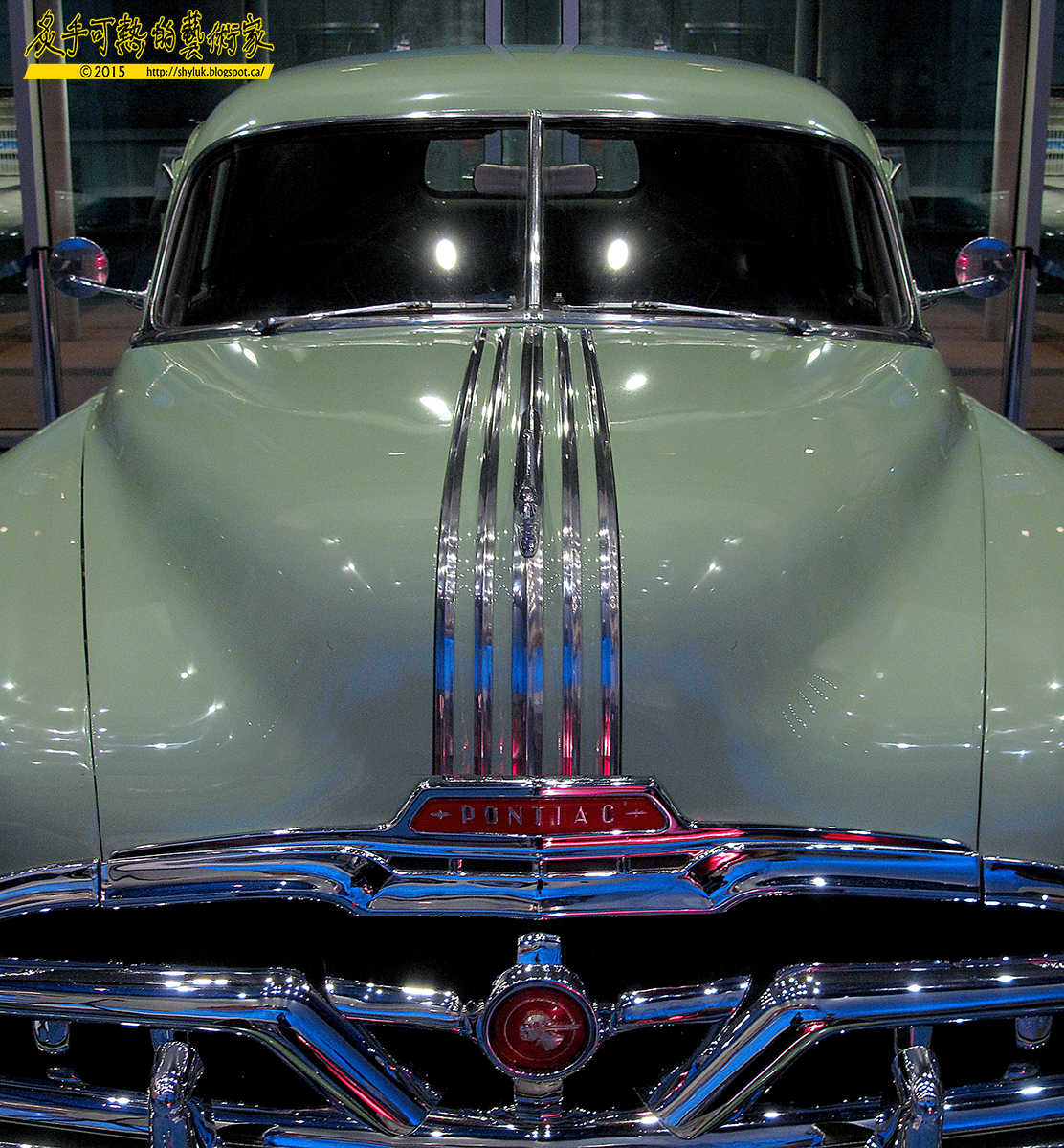 Although I am a Ford man, I can still appreciate the artistry of the other manufacturers.
This JSVB Entry is by Jeff Shyluk at 8:35 PM

This is the "sequel" to JSVB Post #92, where I took a picture of me as a rich guy running over a girl with my Lexus.  In this version, sweet sister and brave brother become bumper fodder in my even bigger, more expensive Lexus: 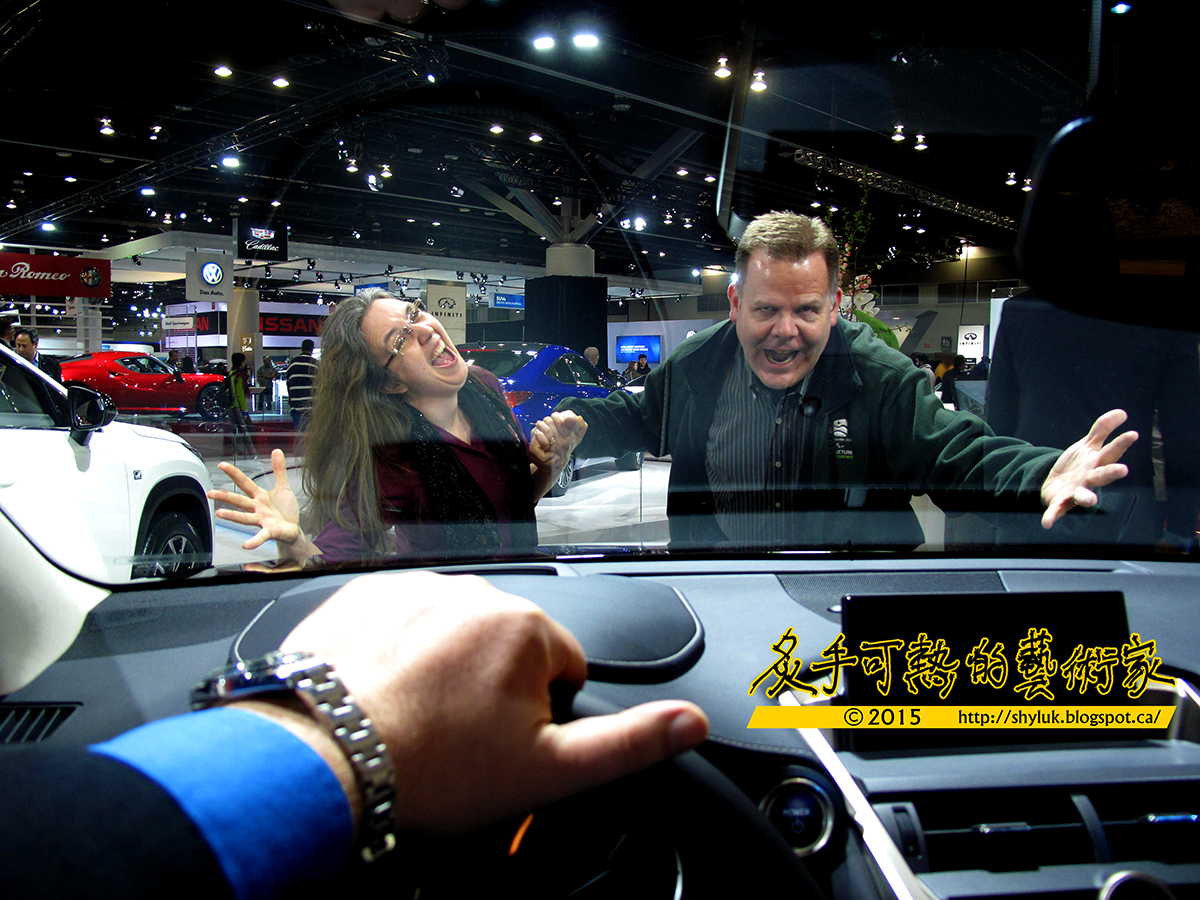 We were at the Vancouver Car Show, again.  The conversation went something like this:

"Hey, remember that picture I took where you sprawled across the hood and I made it look like I'm running you over?  You and your brother go do that, and I'll take your picture."

Later, I edit out the photoset a car show representative who is starting to be suspicious. 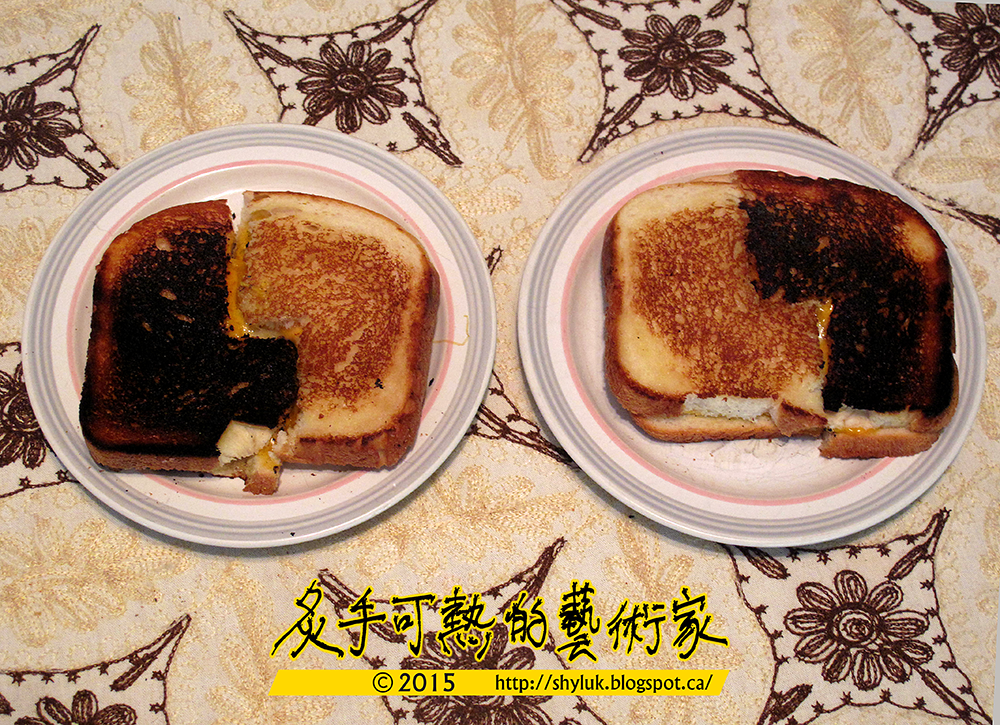 Sandwichfield, as in "Let That Be Your Final Sandwichfield", a lunch-based thematic play on the famous fifteenth episode of the third season of the original Star Trek. 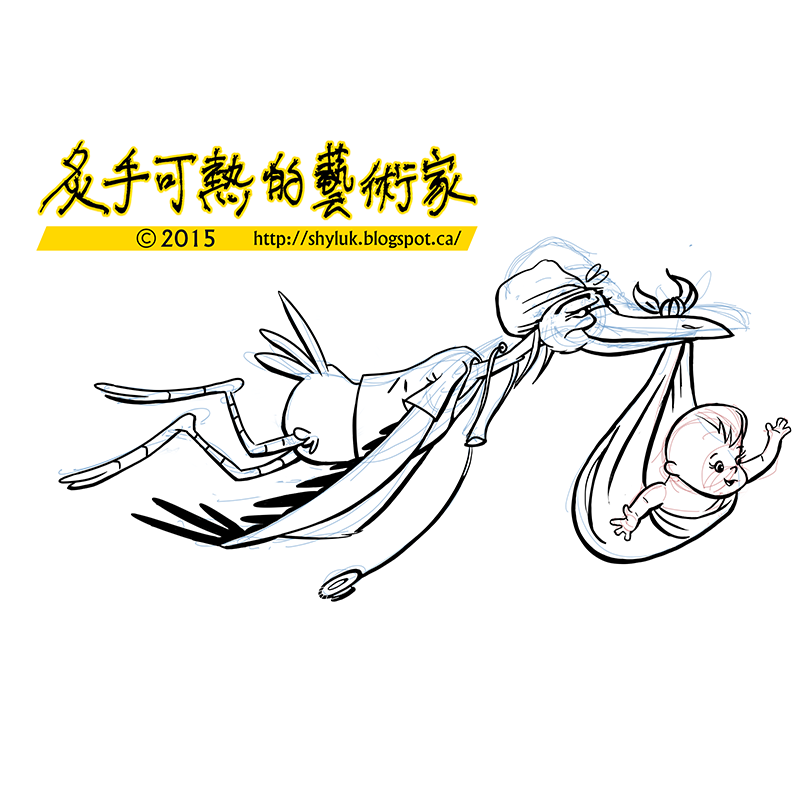 There's some irony in having a stork deliver a baby on JSVB.  This is not any reflection on my personal life, but rather an illustration project I want to deliver (and get paid for) and nothing more.

Storks began delivering babies in medieval Germany, if history is to be believed.  Storks would migrate south not long after the Summer Solstice (a powerful pagan holiday for the early Germans), and would return nine months later to nest.  Seeing as many Germans conceived during solstice, the sight of storks returning would coincide with the annual gothic baby boom.

Hans Christian Anderson popularized the fable of baby-bearing storks, adapting folklore to suit his tale.  However, like much of Hans Christian Anderson's work, the stork story turns very, very dark.  These days, parents skip the nasty stuff and favour the image of the cartoon stork when discussing childbirth with children who are too young to comprehend biology. 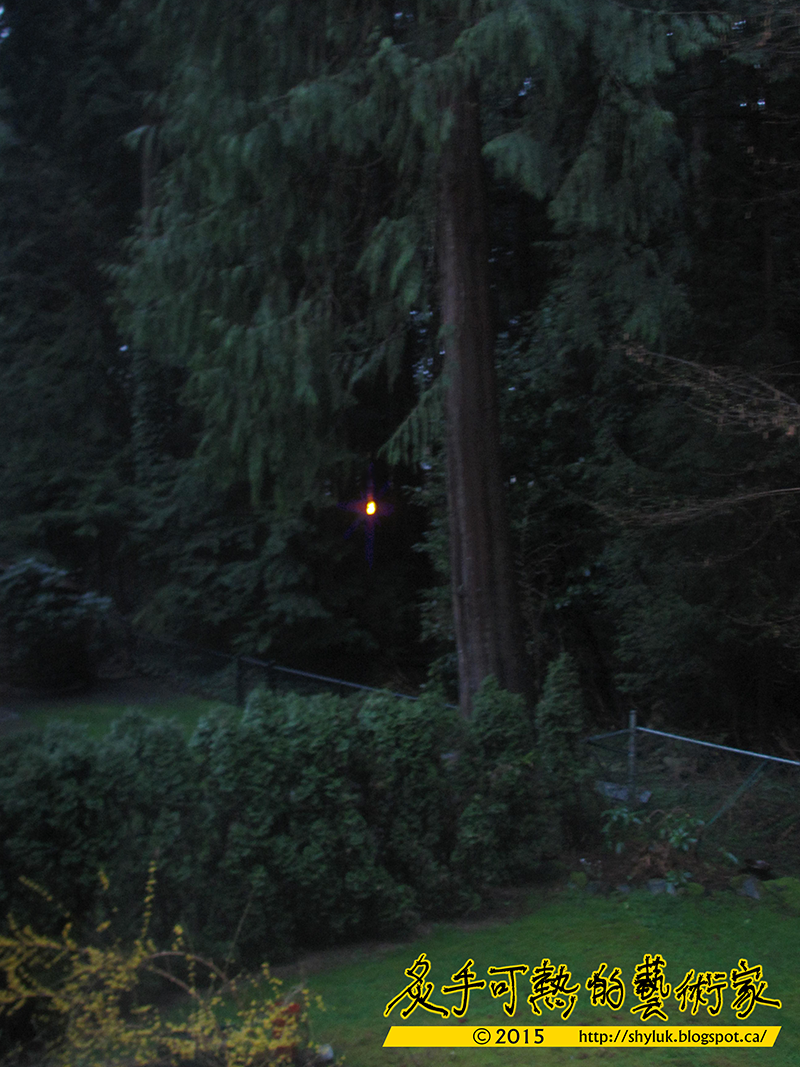 Early this dark morning, in the quiet after a rain squall, I finally had the good fortune to snap a photo of one of the Wills-O'-The-Wisp that you can sometimes see near the forest behind our house.  This particular light, roughly the size of a hummingbird, seems to be interested in the neighbour's yard, as it completely ignored me and my camera.  The shot is a little unfocussed since I was compelled to use a slow shutter, and there's a little bit of glare from the window that obscures things because I took the photo from indoors; it was very wet outside.  Not long after I took this picture the light was gone, although the rain remained. 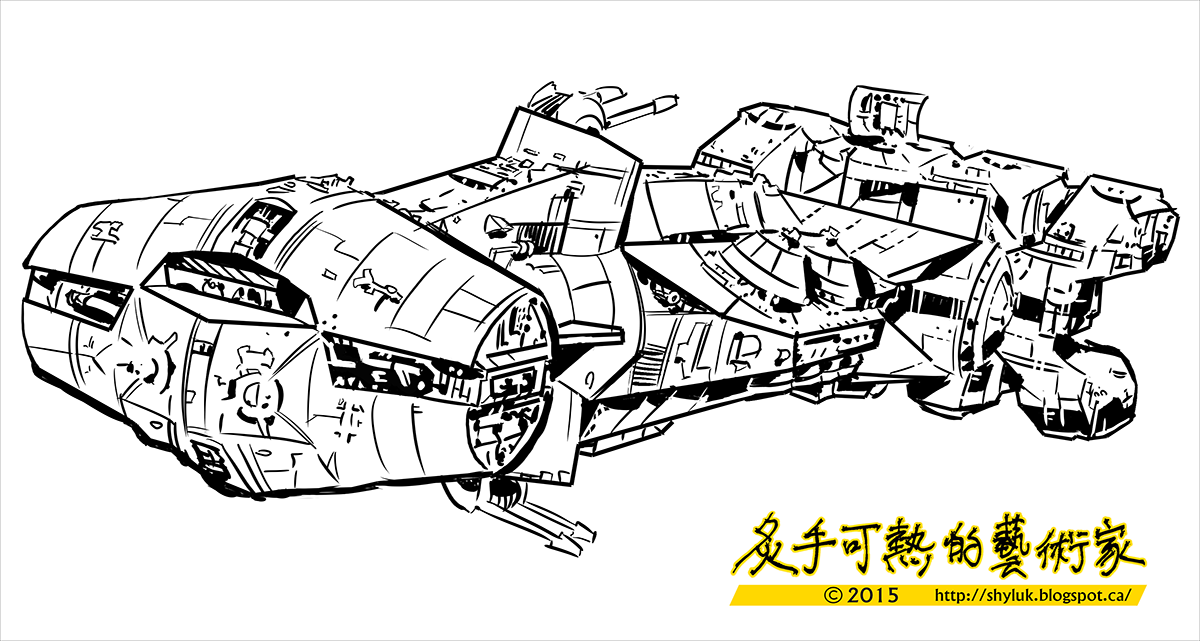 Don't get excited.  I've drawn a Corellian Corvette from Star Wars.  Mostly, I traced its "Wookieepedia" entry and inked in the details.  Other than that, there's not much meaning to todays' JSVB entry. 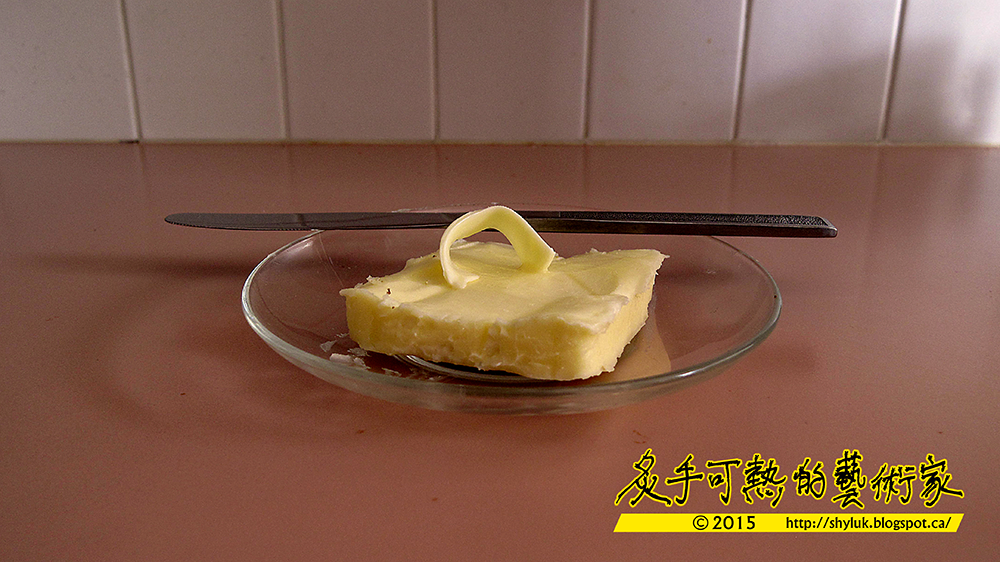 Since the invention of butter, carrying butter has been difficult, since it's just solidified milk fat and therefore slippery.

A geriatric cowboy glued to his cel phone, don't that beat all?  The other day, I had my brother-in-law over for dinner.  At one point when we were all seated at the table, I might as well have been on antipodal Tasmania, since both my companions were deep into their personal screens. 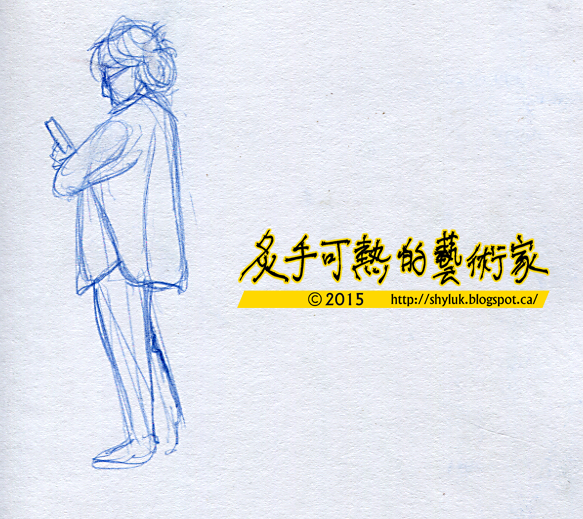 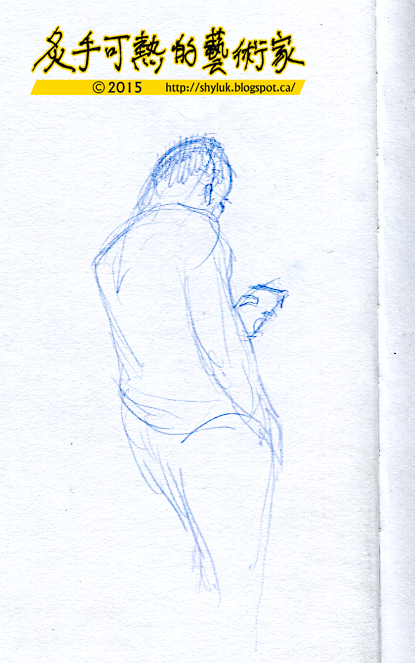 Cartoonists will all tell you that the best place to watch people and sketch them is at the airport.  There's some folks milling around, but many who take on a single pose for an extended period of time, making them easier to draw.

This airport had more statues than the Uffizi Gallery, and I could have walked right up to any of them and drawn them right down to the last pore.  Thanks to the smart phone, people will just stand around in a catatonic state even if an atomic bomb goes off.  The only way they would notice is if the blast somehow cut off texting service.

NO SQUIRRELS WERE HARMED IN THE MAKING OF THIS VIDEO.
NOR WERE ANY EATEN. (TOO MUCH CHOLESTEROL! SERIOUS!)

Wow, another Friday The Thirteenth!  The thirteenth of every month is Ungood Art Day on JSVB.  I try hard to create good art, but since I normally work alone sometimes my internal compass gets confused and good art ends up ungood, somehow.  Every artist makes ungood art, but few celebrate the fact.

As a child, I had an irrational persistent daydream of owning a working phaser pistol from Star Trek.  If I did have one, there would likely be a crater the size of Saskatchewan in the Earth somewhere (probably Saskatchewan itself), and I would be ruling you as your undisputed Beloved Lifetime Emperor instead of posting to a blog.

So now I have a toy phaser, yay!  Unfortunately, the death ray setting has been disabled, but I can use Photoshop special effects to simulate it.

One fine day, there was a fat squirrel cavorting on the lawn outside.  I pulled open the patio door and told my wife to fire the phaser at the squirrel.  Obedient, she did, and I quickly snapped the picture.  Funny thing was that the creature seemed to groove on the phaser sound the toy gun makes.  It sat in rapt attention while my wife unloaded the full charge on it.  We think it was a half-tame squirrel that neighbours may have been feeding, and so was expecting food from us.  It got a snootful of phaser instead, and fifteen seconds of fame on the Internet.

This animation is a fantasy only, since we here at JSVB don't shoot at animals with guns. 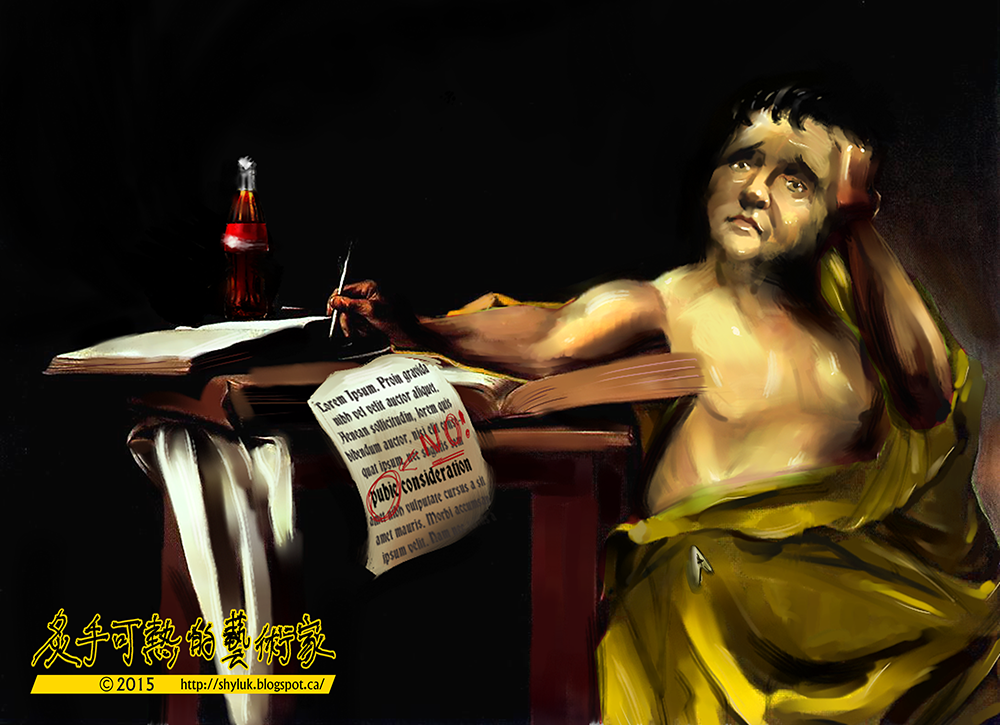 Well, I do apologize for being away from JSVB for so long.  I had to tend to some family business and didn't have much access to the Internet.

Now I do have the opportunity to skewer a friend, so to get back into the rhythm of creating art, I thought I'd start with something inspirational.

My good friend Earl, while working at his dream job, made a horrible mis-spelling on an important document.  Fortunately, his employers were most forgiving.  I think it's fun to take a poke at him anyways, although it was an easy mistake to make and a difficult one to discover once made.

Earl was upset with himself after the error.  However, he was not nearly as upset as Robert Barker, who in 1631 published arguably what could be the world's worst typo.

The way I recall the story, Barker was responsible for printing a fancy new version of The King James Bible.  On his way to present Charles I with the first copy, he idly leafed through the book and discovered that in The Ten Commandments, he had spelled "GOD" wrong.  So upset he was with this discovery, he threw himself into the Thames and drowned to death to avoid being chastised by the enraged King.

Well, that's all a fable.  However, Charles I, the son of James who commissioned the original English Christian Bible, did receive from Robert Barker a copy of the Good Book that had a blunder in The Ten Commandments.  Instead of "Thou Shalt Not Commit Adultery", the Barker edition omitted the "Not", so that the Commandment read "Thou Shalt Commit Adultery", which is ironic enough considering the state of the British Monarchy.

Barker was stripped of his appointment to the Royal Printers and fined heavily.  Although he didn't commit suicide, he did turn to a life of crime in a failed attempt to pay off his debts.  Not long later, he died in poverty.

My first thought was to lampoon Earl by placing him in the place of Marat, who died in his tub from being assassinated while writing.  However, Jacques-Louis David's "Death Of Marat" (1793) was too dark and cryptic.  After all, Earl lives!  So I chose Caravaggio's "San Gerolamo" (1606) as the base, and painted Earl over that.  Although he's showing a lot of skin, I did at least give him a Star Trek captain's toga.