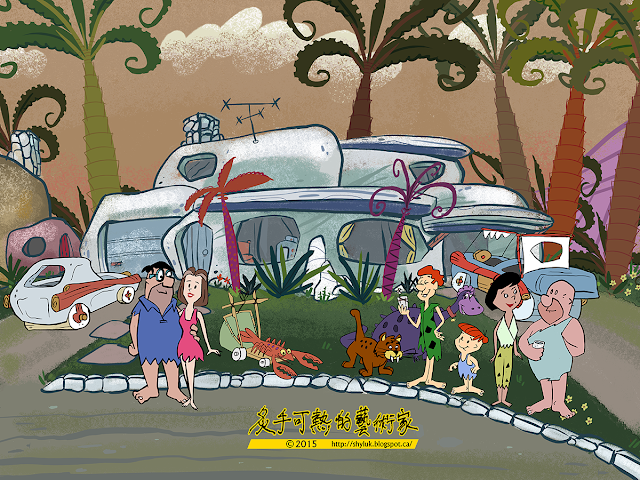 Ever since I made the joke on JSVB about the house on the corner of Tigris and Euphrates (remember that one?  No?  Please click here to go way back to JSVB Post #300.), I've wanted to Flintstonize my own house.  That is, I wanted to draw my house the way it would have looked rendered by Ed Benedict who designed the Flintstones cartoon show for Hanna-Barbera Studios.

Now that the JSVB post counter has reached 1122, I thought it would be the best time to draw my humble home in Flinststones style, since 1122 is also my house number.

My wife and I own a duplex, so I drew in ourselves, our car, our neighbours and their kids and their pets, and their car, too.  My wife suggested that I also draw the lawnmower, since I'm normally to be found pushing it over our grass these days.

Email ThisBlogThis!Share to TwitterShare to FacebookShare to Pinterest
Categories: Animated Discussions, Brush Line and Inker, Jeff's Life (As We Know It), Metro Vancouver 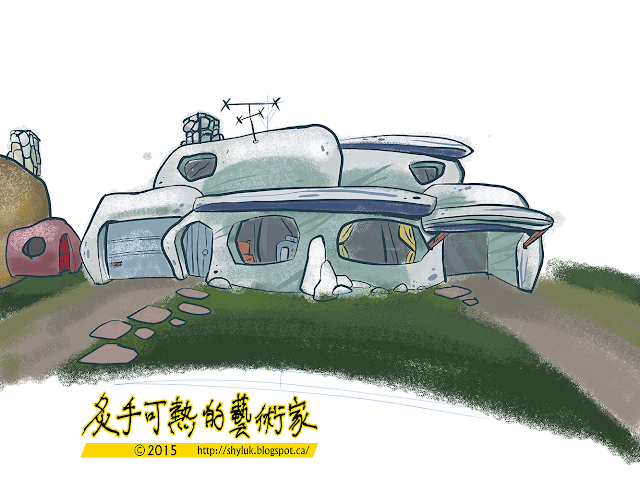 So help me, one of my great artistic pleasures is to try to emulate the art style of Ed Benedict, the man who designed The Flintstones for Hanna-Barbera Studios.  This piece is unfinished, but I've laid in a good part of the line work and many of the main colours.  Next JSVB post, I promise to show the whole thing and tell the story behind it. 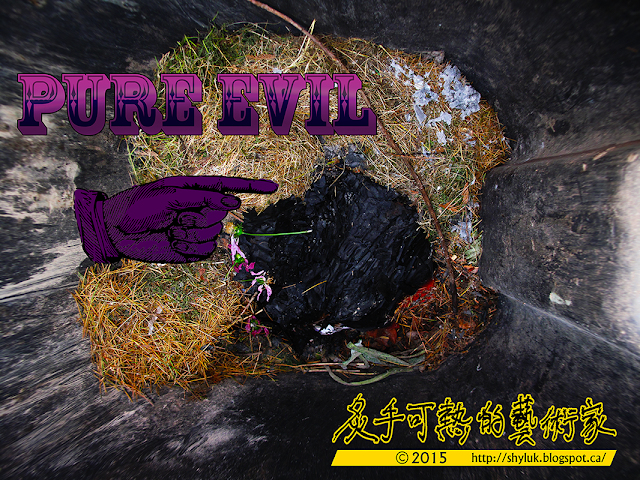 The thirteenth day of every month is Ungood Art day here on JSVB.

Today's Ungood Art is a rare performance piece.  Here, I channel my inner Matthew McConnaughey to sell the Lincoln MKC.  My wife is the videographer, and true to Ungood Art Form, I just spew out whatever I am thinking would sound good without forethought or rehearsal.  There's more monologue, but my wife stopped the camera right at the moment that she judged I had reached maximum stupidity with this video.  The image quality was the direct result of my efforts to compress the file as much as possible.

The music is by Longzijun, picked out from the Internet in my panic to make the video seem more dramatic.   Fortunately, it's covered by the same Creative Commons license I use.

I apologise for the brevity of this post and the general lack of posts recently.  Soon, I will pick up the pace and retroactively fill in my June 10th Happy Birthday To Me piece. 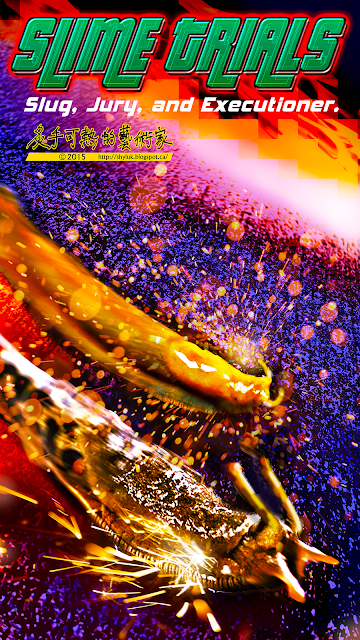 Previously here on JSVB, I showed a picture of two slugs racing to find shade and a nice moist place to rest.
Today's JSVB entry, "Slime Trials", depicts what I believe the slugs were thinking at that time.  Maybe they were dead Hollywood executives re-incarnated.
I've thrown in every post-modern movie poster cliché I could think of: heavy on the Photoshop filters, I also used diagonals in my composition, overexposed unsharp mask, orange and blue contrasting fields, and of course, needless and unneccesary sparks.  The characters even look to the top corner of the frame.
This JSVB Entry is by Jeff Shyluk at 12:33 PM 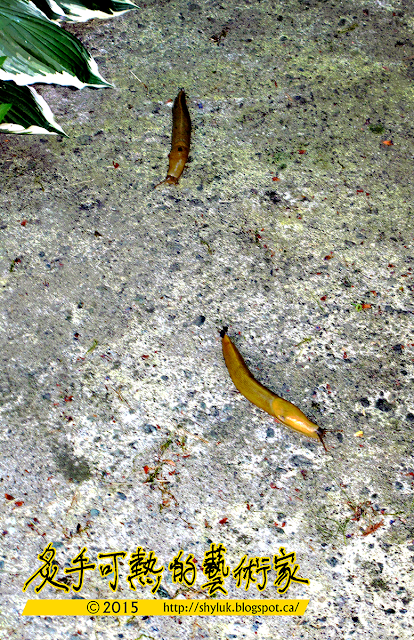 At first my wife and I thought that some animal had double-crapped on our patio.  But then the little piles were seen to move, and as far as turds go that only happens if you eat beans in sriracha sauce.

These are banana slugs, and right now is banana slug season.  Banana slug racing season, to be precise.  I clocked these speedsters sliming along at the blistering speed of an inch every thirty seconds.  That's just an eyeball stalk over three meters per hour.  What a rush!

Tomorrow, I'll show on JSVB a picture of what this race would look like from the slugs' viewpoint!  Stay tuned! 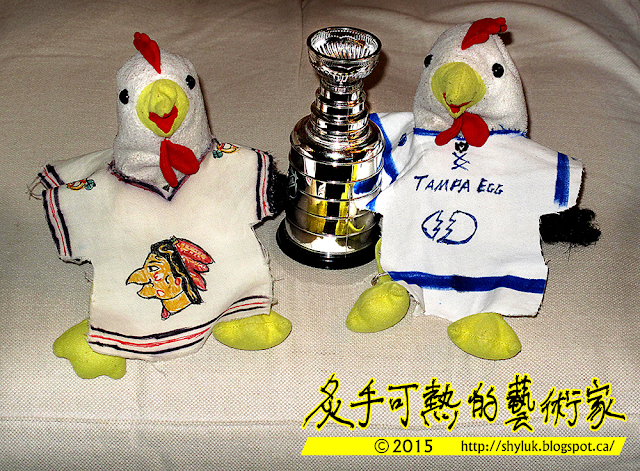 Yesterday was the start of the 2015 NHL Playoffs.  The Tampa Egg Cluckening chicken jersey is new, but the Chicago Chickenhawks shirt is a re-use.  That's to be expected, since the 'Hawks seem to be trying for a hockey dynasty.

Tampa, though... I'm automatically prejudiced against playing hockey in June in cities where there are tall swaying palm trees in the parking lot.  This is a point upon which I disagree with Mr. Gary Bettman. Worse, Tampa Bay defeated Calgary to win the 2004 Stanley Cup, after which the NHL stopped playing hockey for an entire year due to a very unpleasant labour dispute.  So, I have bad memories of Tampa.

One is of being stuck in line at a large store that had only one cashier available.   As we in line waited, there was a little boy up front who became very loud and inconsolable.  His toddler-ific "NOOOO-OOOO-OOO!!" was enough to topple trees for almost a kilometer around.  I joked to the person next  to me in line that the kid must have just learned that the Player's Union had rejected the owners' latest offer and the season was going to be postponed for another couple of months.

I think my favourite recollection of the Tampa Bay Lightning was a segment of comedian Rick Mercer's "Talking To Americans".  This is a bit where Mercer asks citizens of the US of A their opinion on something that every Canadian would know.  Most of the time, the Americans are ignorant of the correct answer, but in trying to be polite, they make up whatever they can come up with on the spot.  It's a funny segment, but cruel to our fine neighbours to the south.

Anyways, Rick traveled to Tampa Bay and went to the beach wearing a Tampa Bay Lightning hockey jersey.  At the time, the jersey had the words "TAMPA BAY LIGHTNING" in large lettering right on the front.  Then he asked the locals what the name of the Tampa Bay hockey team was.  None of them could name the team, and none of them thought to just read out loud the name on the jersey.

The modern Tampa Bay jersey just says Tampa Bay (or "Bolts").  The new logo has a stylized lightning bolt, but by very slightly stretching out the logo, it also looks like a cracked egg.  Perfect for a chicken jersey! 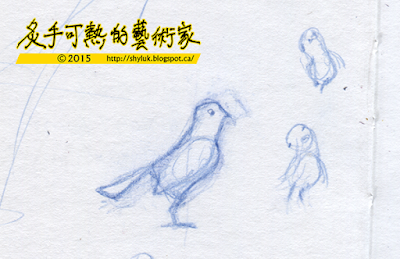 Yesterday, I had my sketchbook out in the back yard, so I doodled these birds that were hopping on the lawn.