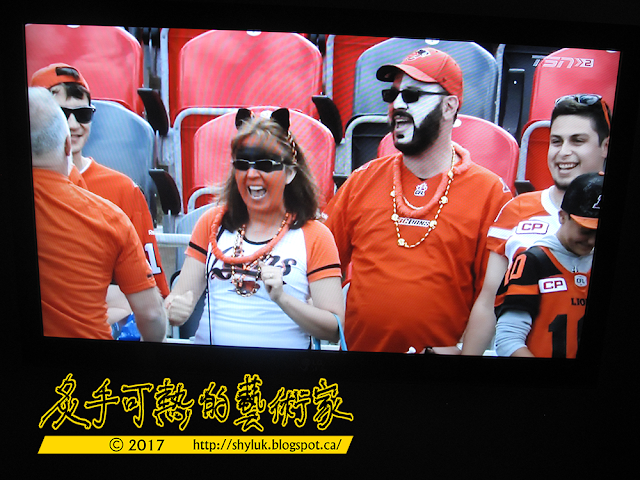 My wife and I are on television!  We're face-painted and costumed for a football game between the BC Lions and the Ottawa RedBlacks.  This clip lasted about two seconds, and we had no idea it existed until some of our cousins started begging us for autographs.   Well, they were laughing about it, but they did spot us on TV before we knew that we had been broadcasted internationally.

I ended up photographing the television screen for this keepsake.  It's worth mentioning that it was a very good thing I had painted my face, otherwise I would have been green.  I had a really bad stomach virus that day that kept me from eating much more than dry toast, and this on an excursion where free food was included.

The image is courtesy of TSN, however since it's us, we retain the rights... I think.  Who knows?  The catchphrase "We're Nearly Famous" is a twist on the ultra-renowned slogan of my friend Earl, "I'm Nearly Famous!".  Thanks, Earl.

Might as well check in on the old Personal-Fame-O-Meter.  Last time I did this was back in 2014.  Has my personal fame changed?  Let's see:

Nope.  Oh, well.  Funny how some of the other non-JSVB entries have changed since then.

Email ThisBlogThis!Share to TwitterShare to FacebookShare to Pinterest
Categories: Jeff's Life (As We Know It), The Sports Section 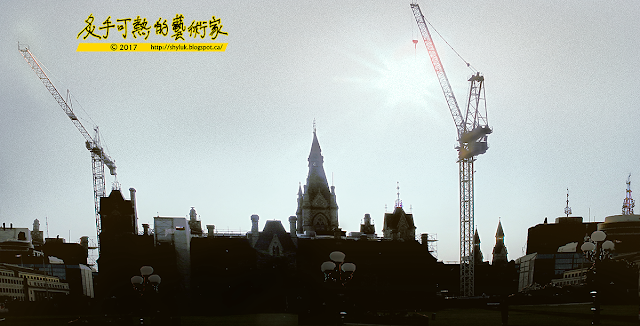 I recently had the opportunity to visit briefly Ottawa city, Canada's capitol.  I was struck by the congruity of gothic and modern architecture.  Ottawa boasts several different architectural types, including Gothic, French revival, Art Deco, American Colonial and Modern.

Shooting this photo into the sun, I saw a Steampunk landscape.  Steampunk is fanciful, it combines the gothic ethos of pointed, cathedral-like stone architecture with the dawn of industrialism, coincidentally a period when global exploration would be exploited by mass media.  You take this confluence and bring the technology to modern standards without changing the aesthetic, and you get steampunk.  It's gritty and intimidating, but also exciting as well, the idea that Nature can be tamed through superior technology.

Steampunk is a companionable opposite to Art Nouveau (see JSVB Posts #1404 and  #1408) where unruly Nature breaks through the confines of the man-made world.  I've been looking around: I've been seeing some really great new Art Nouveau style pieces, call it Nouveau Art Nouveau.  We're reaching the same point in our culture that was perceived by the artists of the original Art Nouveau period: our technology has become powerful enough once again to sublimate our society and it remains to be seen how Nature will react and adapt.  Historically, that process has been most painful. 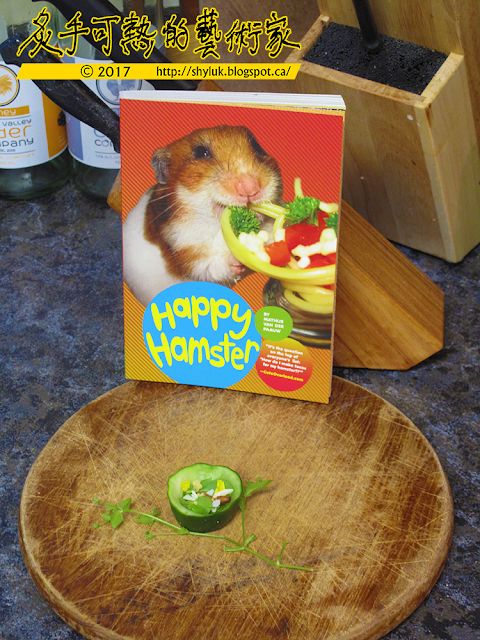 Zhora is the name of our new hamster.  She's named after one of the characters from Blade Runner (1992).  She doesn't yet pose well for the camera, so I don't have any good pictures of her so far.

My wife wanted to spoil the little critter with a treat from a book she bought called "Happy Hamster" by Mathijs van der Paauw.  Mr. van der Paauw is an accomplished chef for rodents.  He makes tiny little meals that look like human food but are healthy for hamsters.

Above is our attempt at a Greek Salad: the bowl is made from the hollowed end of a cucumber, and the salad is chickweed with bits of walnut for croutons, edible flower leaves for colour and a little tiny bit of shaved Parmesan cheese.

I set up my camera to take pictures of Zhora eating this miniature delight, but the moment she saw it, she seized the bowl in her jaws and made off with it into her castle hideaway.  I never saw a hamster move so fast before.  Good thing I took a picture of her meal before I put it in her cage! 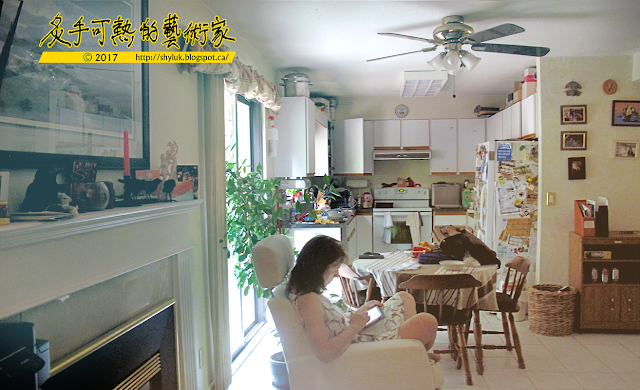 As I worked it was a beautiful sunny day, and warm, luxurious light poured in through our glass patio door.  I looked up from my task and saw what you see in this picture.  I snapped my wife's photo without her being aware of it. 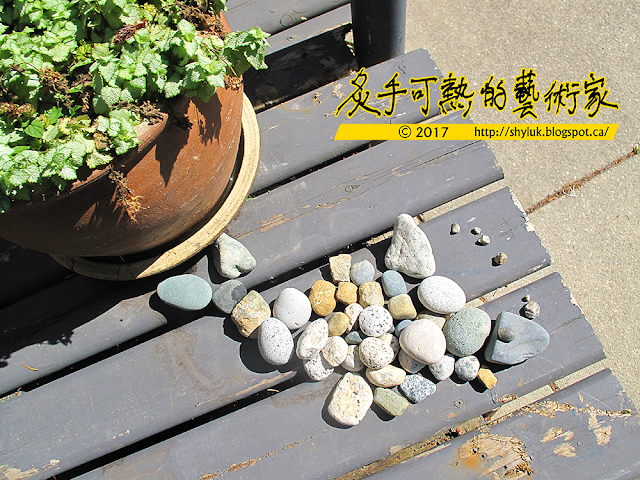 The thirteenth day of every month on JSVB is Ungood Art Day.  If I am not producing much art, then there isn't going to be a lot of Ungood Art, and that's Ungood as well.

The closest I can get to Ungood this month is a sort of visual pun: it's a rockfish.  I hope you see it. 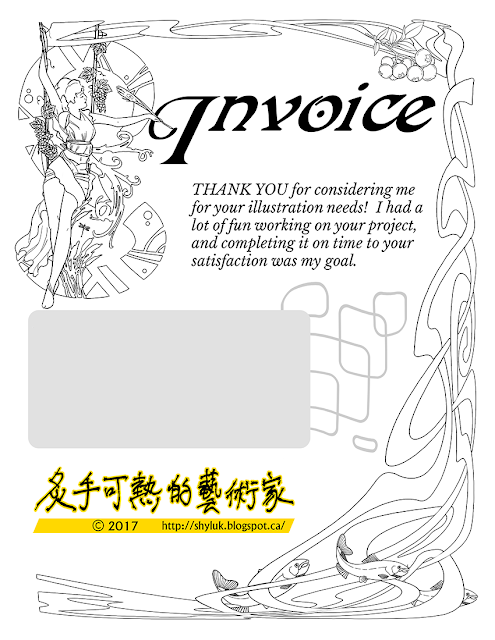 Although I haven't been posting to JSVB regularly enough, I have been working at least for a while.  Now I find I have to bill my clients, and this despite having entered my phase of Progressive Summer Laziness (PSZ).  The business aspect of art I find daunting although as my wife will point out I do like money enough.

I decided that if I had to write up a bill, I may as well make it something worth looking at, and to try to enjoy the process.  I co-opted the Art-Nouveau drawing of the girl on a swing from JSVB Post #1404 (please click here to see it) into a full-page design.  I've blocked out the particulars, but the basics are that I tend to charge $40 an hour.

The design incorporates a number of things that I can see if I go on a walk around the block:  fruit and berries, dragonflies and cat-tails, running streams and wild salmon.  I did try to include a bear in the picture, but it got too cluttered.

The client wasn't expecting this invoice and has been stunned into submission, which I see as proper.

Among many of the things I had wanted to post to JSVB but didn't in time were some entries on the solar eclipse of August 21st, 2017.  Many of my friends went to great lengths to travel to the United States to view the full eclipse.  My wife and I had the day off, but we stayed home and watched the partial eclipse which maybe is less exciting and not much to post about.
Not willing to shell out money for proper eclipse glasses, but also unwilling to sear our retinas, we chose to view the eclipse indirectly.  The hole made by a pin through a piece of paper is a sufficient lens to project an image of the sun onto a screen.  This much I recalled from grade school science; I was half my height and a quarter of my current weight the last time there was a significant eclipse of the sun where I lived. 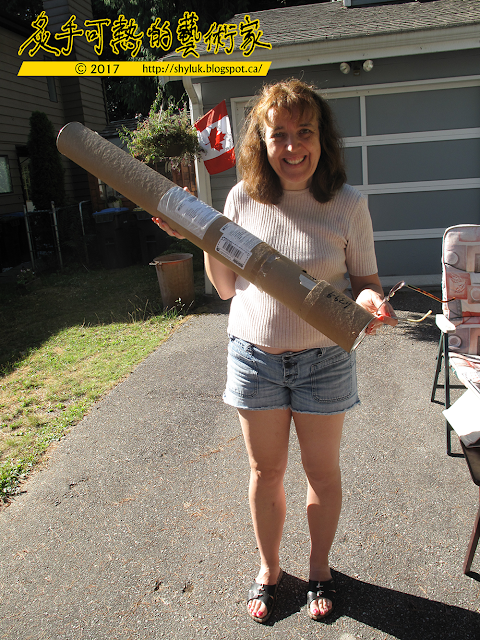 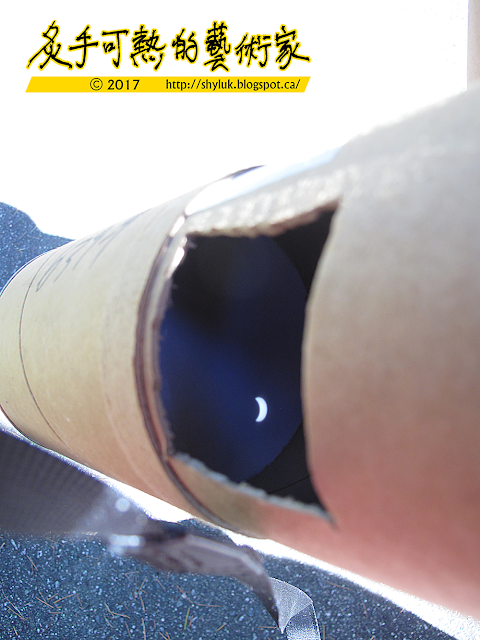 My wife found the materials we needed to make a pinhole lens viewer.  She took an old packing tube and poked a hole at one end and covered the other with paper.  She carved a viewing port in the side.  I christened it the Science Bong 600.  When you line the Bong up with the sun, you see the solar image image in the viewport. The lunar occlusion changes the apparent shape of the sun projected on the screen as you can see above.

In retrospect, I should have painted and decorated the Science Bong 600, but all of the weather forecasts for the day called for clouds and rain.  My wife quickly built the Bong prototype when it turned out the forecasts were all wrong and we were blessed with a clear view.

Email ThisBlogThis!Share to TwitterShare to FacebookShare to Pinterest
Categories: Geekdom Come, Jeff's Life (As We Know It), Metro Vancouver

Today's JSVB Post shows my wife eating crickets.  If this kind of thing disturbs you, don't scroll down.  At least they were cooked first. 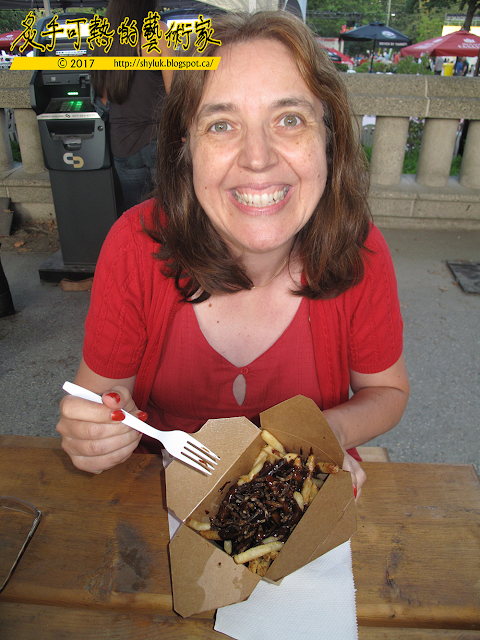 The Pacific National Exhibition, or PNE, has been reversing dwindling attendance numbers by featuring more and more outlandish thrill rides, thought-provoking exhibits, and exotic food and drink.  I remember in years past the craziest thing you could buy in the park were hamburgers made from ostrich meat (verdict: good, but very lean - a healthy burger!)

This year it's the latest protein fad, yet one that may presage the apocalypse: fried crickets.  You could eat a cricket burger, but we chose crickets in gravy on french fries.  The gravy was thick and salty and the fries were greasy, maybe all to disguise the cricket-eating experience.  Verdict: it's not all that bad, but it's not all that good, either.  The little guys taste peppery and nutty, which is okay but you're going to have trouble pairing wine to that.  Maybe a fresh Gewurtztraminer?  The mouthfeel of crickets is a bit off-putting, a very delicate and airy crunch with just a million tiny drumsticks to get stuck in your teeth.  They are their own toothpicks.