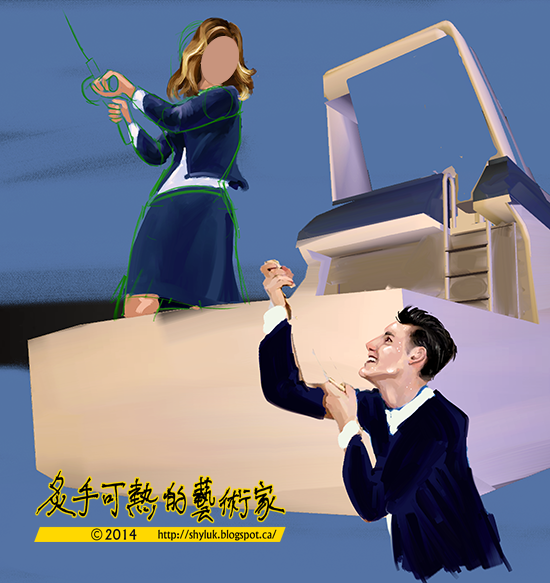 Progress on my illustration.  You can see where the whole thing is going now.  I can show the male character, since he's fictional. 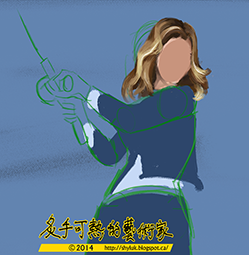 Lots of things are going on these days, which has pushed  posting to JSVB down on my list of priorities.

In any case, I've made progress on my fishing image, although I'm not sure I have permission to show any identifying details.  So, here's a blank face with nice hair and a blue suit.

At least Blogger seems to have stopped malfunctioning for now. Yay!

A new commission.  I'll post bits and pieces of it as I go.  At this rate, I'll be making enough money to plate myself in pure gold, which will make for a nice change of pace. Let's invite Jeff to the party!  Who's Jeff?  He's the guy who became so rich he had himself plated in pure gold.  That guy?  Invite! 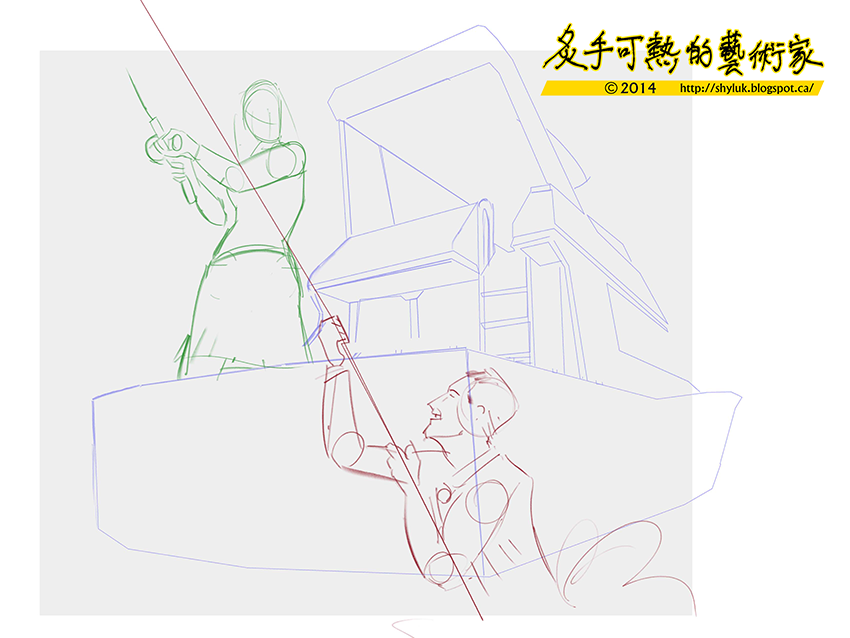 On a side note, Blogger's text formatting seems to be acting up.  I apologize for any layout strangeness here on JSVB. 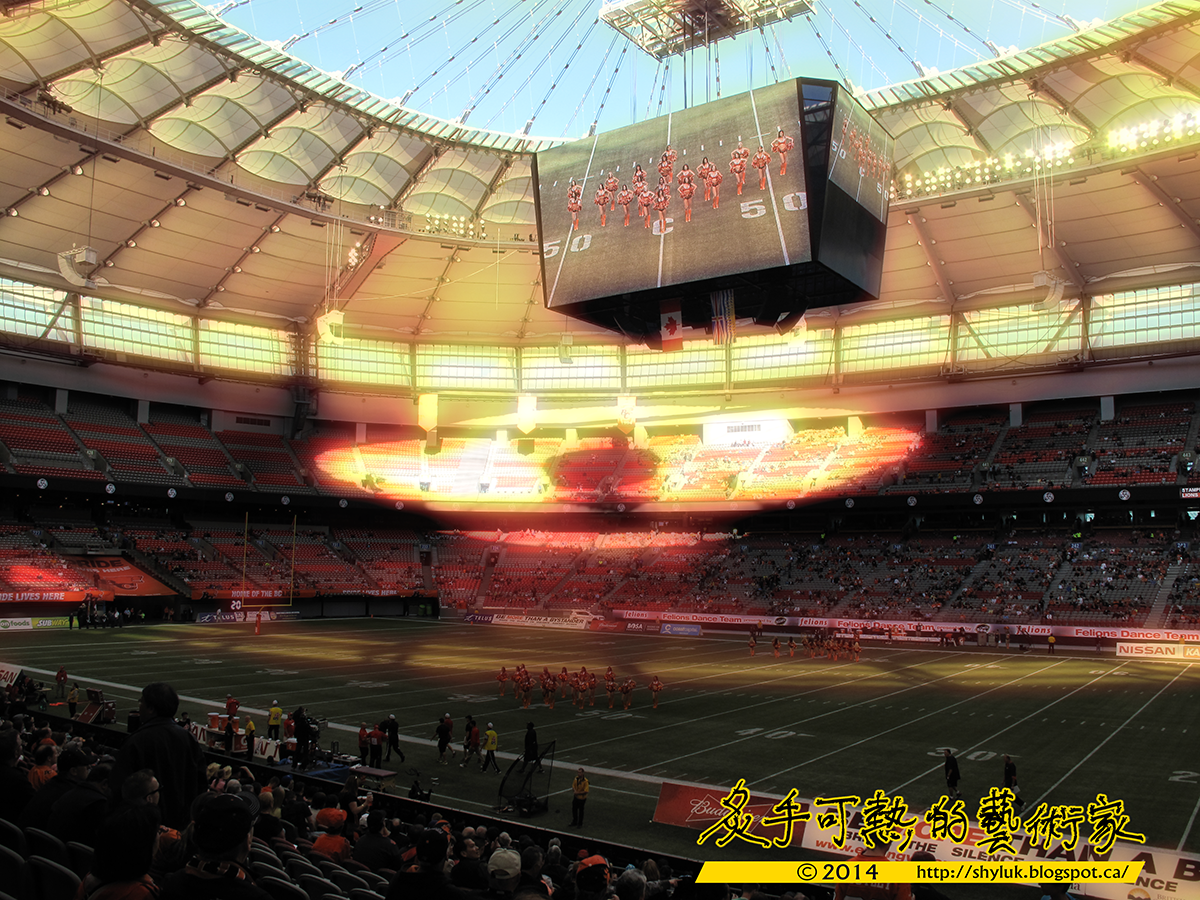 At BC Place Stadium, we call this effect "The Eye Of Sauron".  What's happening is that on sunny days, the rood on the stadium is pulled open like the iris of some gigantic eye.  The golden evening sun penetrates the haze and smog of the city at such an angle that it looks like the shape of a massive, fiery, cycloptic unblinking eye.  The assembly that pulls the guy wires is in a cylindrical pod that hangs directly in the center of the iris.  It blocks the sun, making the eye look very much like it has a pupil.

This fearsome eye holds us in thrall of its gaze for nearly an hour before it melts away when the sun sets.  Of course, I've goosed the effect a little using Photoshop, but not as much as you'd think.  Friends of ours who sit directly in the gaze of the thing say it's incredibly dazzling.  I would add stunning, or perhaps evocative. 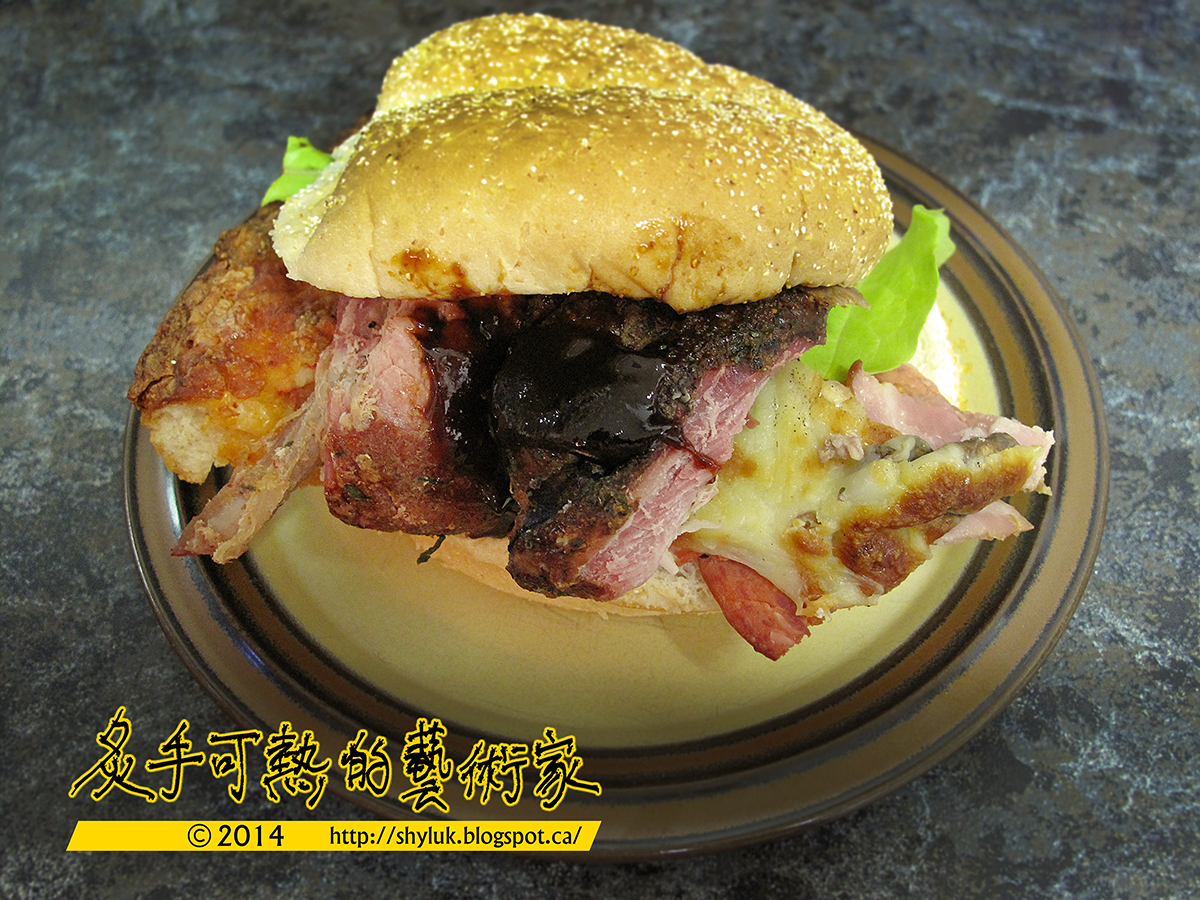 Out of left-overs, I've invented a new food item: the Pulled Pizza Burger.  It's a slice of pizza covered with pulled pork and topped with lettuce and barbecue sauce, all placed in a sliced bun.   Reminds me of the cooking I used to do as a bachelor, except this tastes good. 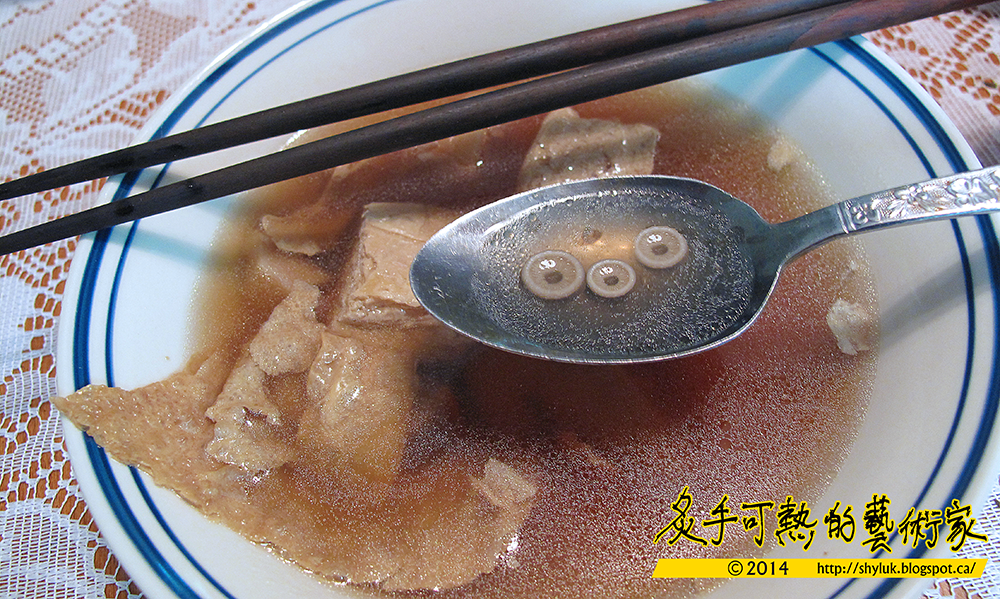 "What is this?" my wife demanded, "Animal sphincter soup?"

I had purchased a container of soup stock from the Asian supermarket.  The foreign lettering beguiled me in the lunch aisle, that and the low sodium.

"I think they are mushroom tops," I assured her.  I don't remember seeing mushrooms on the list of ingredients.  The big flaps of skin-like material slithering at the bottom of the bowl didn't make it look any more appealing.

Even so, eyes shut it did taste pretty good. 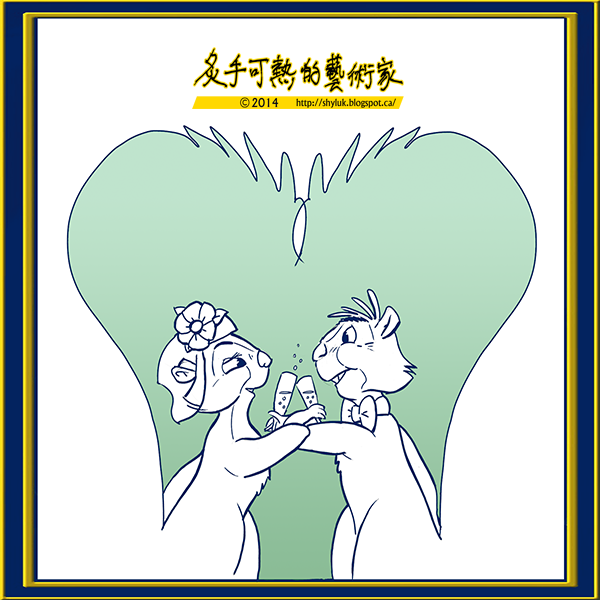 Romantic, no?  The wedding squirrels continue to haunt me, so I am using them to click off yet another entry here on JSVB. 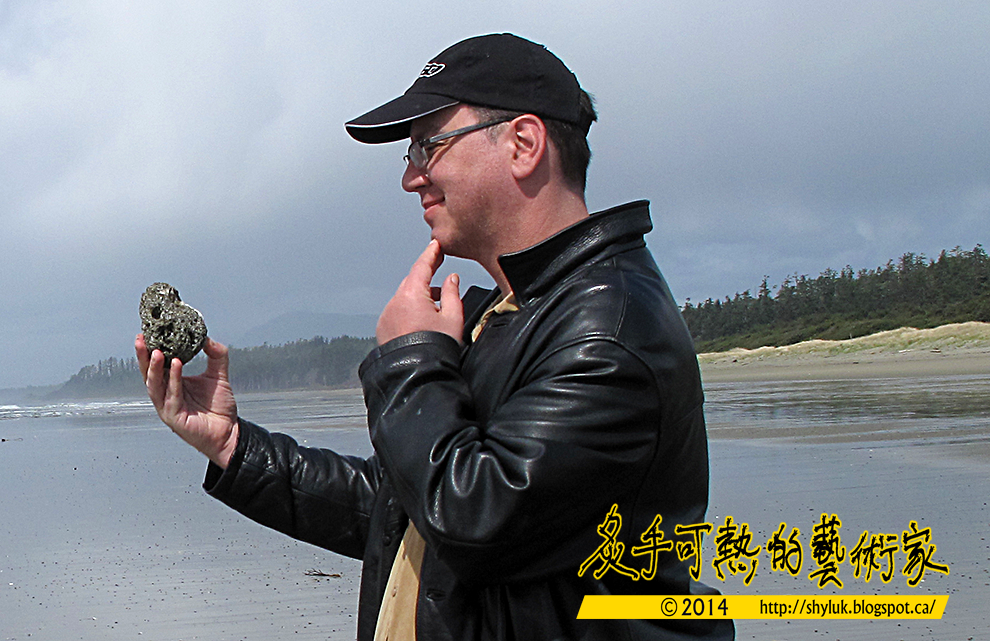 Another Ungood Art Day on JSVB, another cornball photo of me in the Shakespearean Hamlet Pose.

If you play videogames, you'll recognize her from the world of Skyrim, one of the Elder Scrolls  games released by Bethesda Studios back in late 2011.  If you don't know Skyrim, it's an adventure game where you play as the Dragonborn, sort of a mystical superhero.  Early in the plot, the warrior Lydia is assigned as your protector.  Since she travels with you through much of the game, she delivers a number of speeches that add description to whatever it is you do.

A very popular character in videogame lore, Lydia divides the gaming community into camps that either love her or hate her.  She's easy on the eyes, certainly, and she is capable of carrying many useful items for you across the massive Skyrim map.  Her voice is provided by Broadway actress Colleen Delany, who superficially resembles Lydia in looks but delivers her lines in a strong American accent.  After a short time, Lydia runs out of new things to say and often repeats herself, especially her most banal patter.  "I am sworn to carry your burdens," is possibly the phrase she repeats the most.  Some find it grating, others find it charming.

Lydia takes her role of protector very seriously.  She will attack your attackers with extreme ferocity.  However, sometimes an unintentional bump into another character will result in the end with everybody in the room senselessly slaughtered and Lydia cleaning the blood off of her sword.  Again, some find this behavior annoying (perhaps restoring the game to an earlier save point to avoid the unnecessary deaths), while others find Lydia's fighting spirit, her immediate urge to fly into a berserker blood rage, to be cathartic.

However others feel about Lydia, I think she suits the world of Skyrim perfectly, with her odd mix of beauty, violence, and hackneyed Americanism.  Almost since I started playing the game, I was thinking of making some Lydia fan art.  The idea eventually got mixed in my imagination with the concept of the scandalous "Lady In Red" pin-up featured in "The Matrix" (1999).

A couple months ago, I realized that I would need some kind of cheesecake girl for my annual "Happy Birthday To Me" exhibit here on JSVB, where I attempt to make for myself the kind of girly picture I like to see.  So, I settled on the idea of making a Hollywood-style eight-by-ten glossy promotional photo of Lydia.

I used the model and the colour palette from Skyrim as my start, loading the ruff sketches onto a pose from a Captain America comic book.  Then I rendered the underpainting, blocked in the main colours and spend a couple of weeks grinding out the details.  I made my version of Lydia more muscular than the original model, which I feel is too slender for a warrior, and I also made her overall proportions a bit more cartoony so that she would have more visual appeal.

Finally, today I created Lydia's signature (she's right handed like I am, but has better handwriting), based on the Scriptina font.  I added a couple dozen spent arrows, since in another medieval war game, Mount & Blade (Paradox, 2008), your character will collect arrows in his or her shield if shot at.  I really like that porcupine look, which is missing from Skyrim.  And I hope you enjoy seeing Lydia as well, either for the first time here on JSVB or in a return to Skyrim.

Please check out other artwork I have in my Showcase section to the right, and drop me a line at the e-mail address I have listed on the top of my page.

Lydia is the intellectual property of Bethesda Studios. Scriptina is a free font courtesy of Apostrophic Labs. 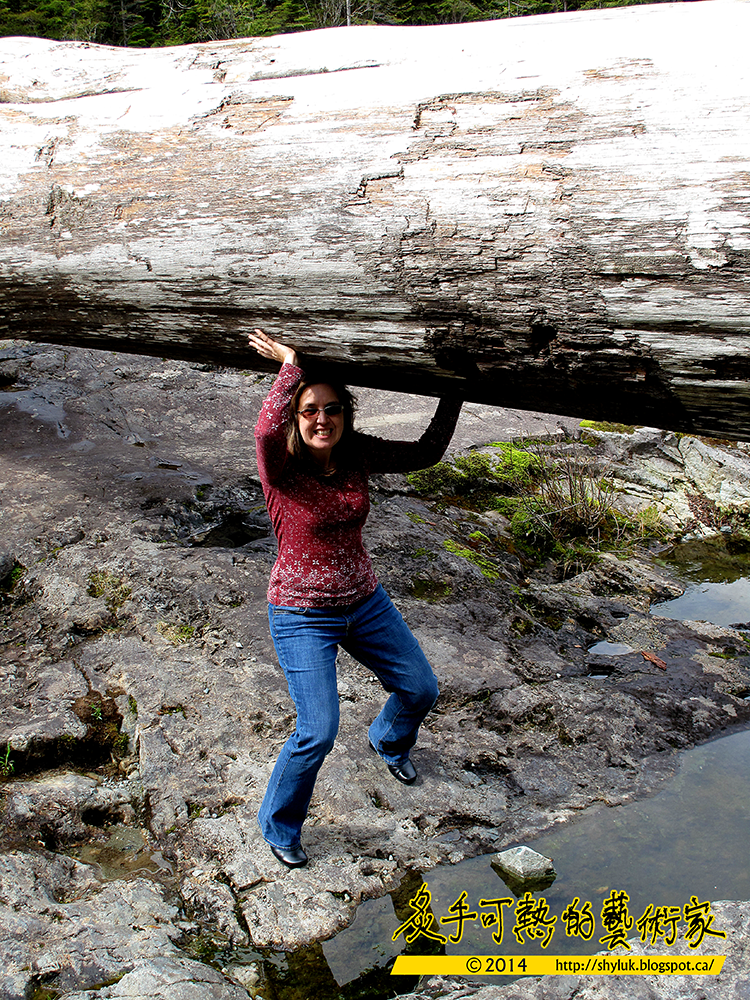 I was fooling around with my camera when my wife came out of the forest carrying tonight's firewood, so I snapped her picture.

Be sure to check out JSVB tomorrow for my annual "Happy Birthday To Me" pin-up post.  It'll be a killer! 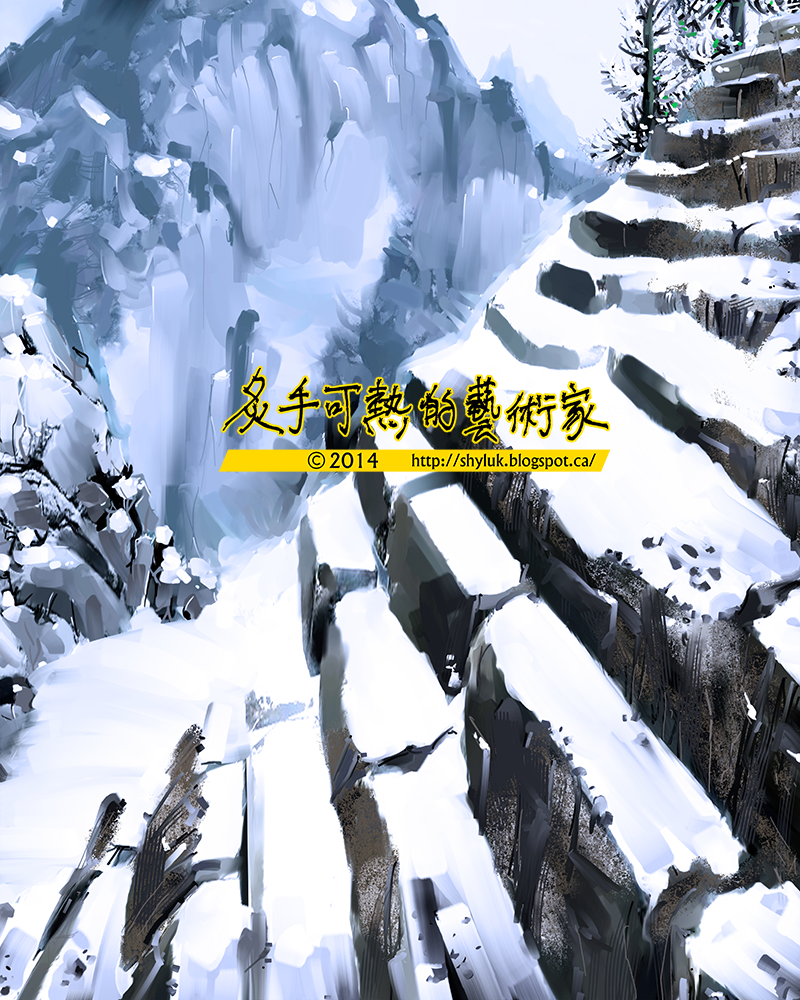 I've been grinding away at the background for this project, my next Happy Birthday To Me JSVB post, which I will have finished in five sleeps from now.  I've been ignoring paying work to get this done.  Maybe my priorities are screwed-up.

Anyways, the middle part of the image is foggy and indistinct since that's where the character will go.  Who will it be?  I hope you find this as exciting as I do.  It's a project I've been meaning to do for years now.  Tune in to JSVB in a few days and see! 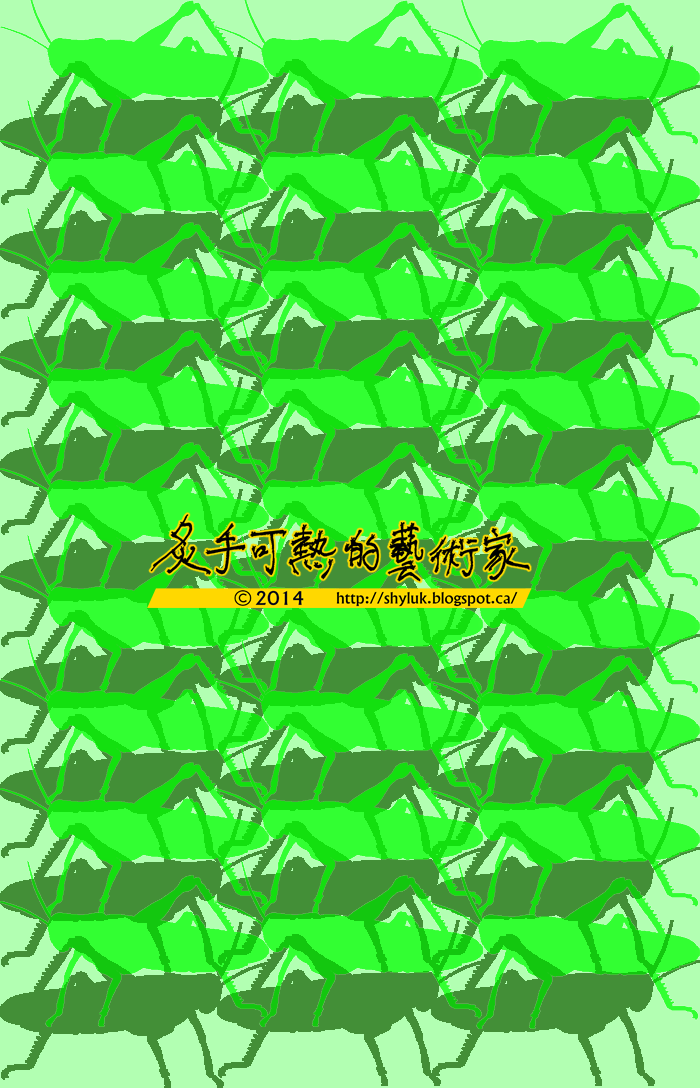 I've eaten a couple of grasshoppers fried in garlic, but it turns out there are many, many more in the wild than I could ever hope to eat.  News from New Mexico tells us that they are currently enduring clouds of locusts so large and thick that you can see them on weather radar.

Every year, New Mexico gets a lot of grasshoppers.  Yet every twenty years or so, they get an unbearable number of them, a sort of "supercloud" that eats everything in its path and creeps out many folks along the way.  Still, even in a natural disaster someone profits, and Albuquerque windshield wiper dealers must think it's Christmas in June.

Warning: Today's JSVB post is a photograph of me eating a bug.
Scroll down only if you aren't squeamish about insects as gourmet food. 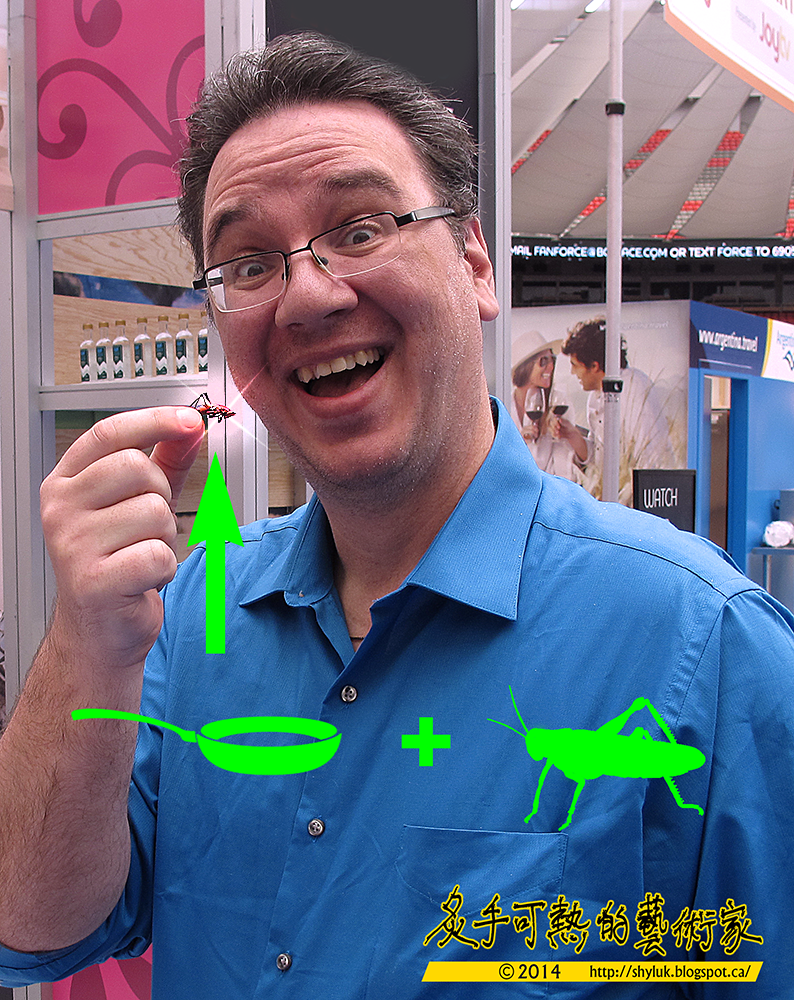 My wife snapped this photo of me at Vancouver's annual food fair, eating grasshoppers fried in garlic.  They are pretty good!  They confer a strong nutty taste, and the legs are like very tiny chicken wings only there's six of them per creature instead of two.

So: no, I am not eating live grasshoppers.   These have been fried in oil with garlic.   They were also put to death humanely.  Each hopper gets to spend its final day in a specially constructed miniature lounge, pretty much like The Frolic Room in Los Angeles.  Inside the lounge are a number of couches upon which the hoppers can recline, if they like, and watch closed-circuit movies of ants hard at work.  Lazy grasshoppers really enjoy this sort of life, at least according to the literature.

Once the grasshoppers are fully engaged with watching the ants, the chef carefully lifts the roof-lid off of the lounge, reaches in, and carefully dispatches each grasshopper in turn by knocking it forcefully on the head with a tiny purpose-built silver hammer.  Then the bugs are cooked in oil and we eat them.