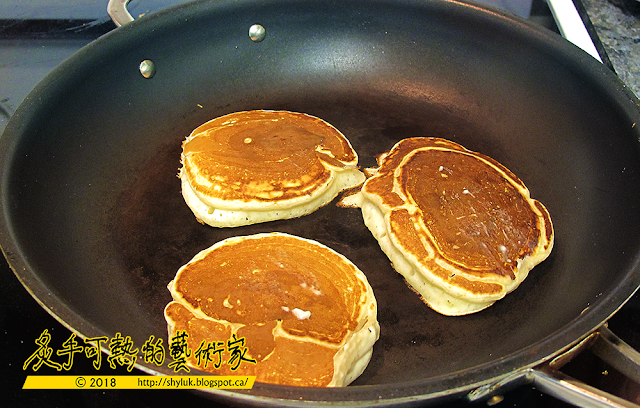 Pastoral. Bucolic.  Sourdough pancakes.  I've continued my sourdough kick into breakfast food.  I don't have a real technique for these, all I did was replace the milk in the basic recipe with sourdough starter.  This turned out so well, I don't think I can go back to regular pancakes anymore.

Can you save the baby from the maze?   Scroll down for solution. 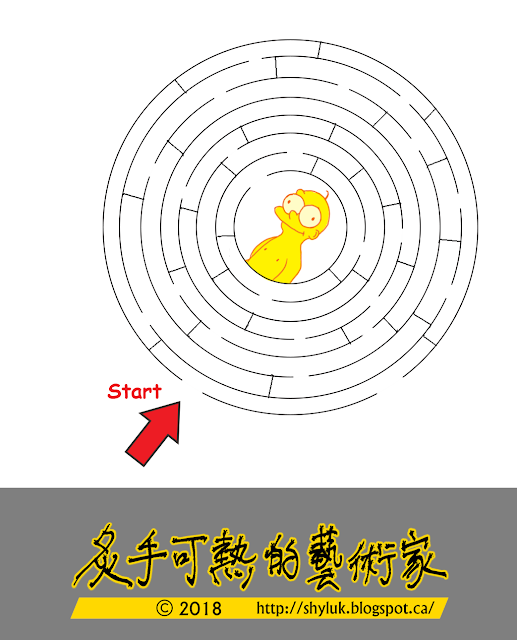 Solution:  No.  I imagine this may upset perfectionists and people who love children.  For the record, using Comic Sans typeface upsets me. 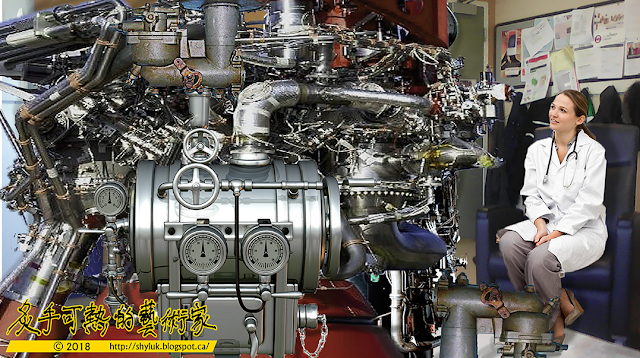 When you see posts like this on JSVB, you know that April Fool's Day is nearly here.  April Fool season has become my Christmas, I'm at my busiest all year. 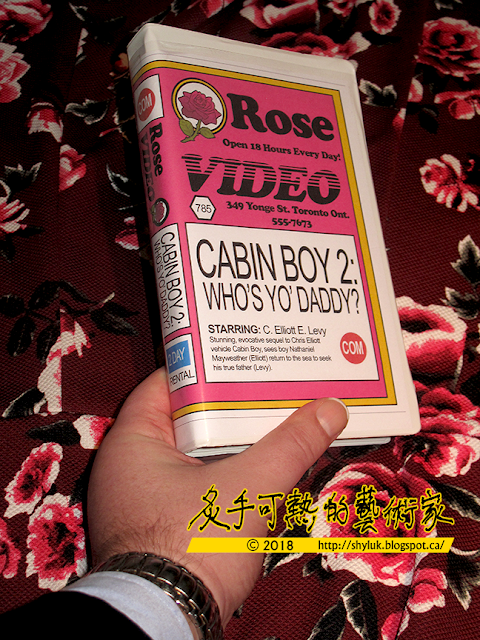 Here's a close-up view of the Rose Video VHS box I mocked up as a prop for a contest entry to visit Schitt's Creek (a television show about a benighted fictional small town).

I do own a copy of the first and only Cabin Boy movie, although it's on DVD and not videocassette.  I bought it from a Blockbuster store that went bankrupt, just like Rose Video. 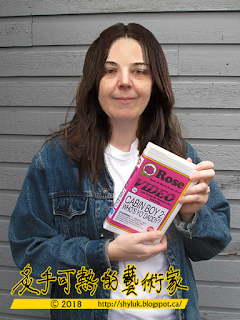 I call this picture "Late Fees", since it's all about being a bit late.  For one thing, I've been very late at posting to JSVB.  I've been busy!

In a bid to snag a vacation, my wife and I entered a contest to visit the Rosebud Motel in Schitt's Creek, near Toronto.  Schitt's Creek is a television show we both like.  If you've never watched it you can tell by the name that it's not exactly Masterpiece Theatre, although Schitt's Creek has an extremely talented cast and some very witty writing.

It turned out that to enter the contest, we had to supply a Schitt's Creek-themed picture.  My wife volunteered to dress up and be photographed as Stevie Budd, the owner of the motel.  I volunteered to Photoshop the top of Stevie's hair and forehead onto the picture so that my wife appears more like Ms. Budd.  Looks weird!

I also mocked up an old VHS videocassette  for Rose Video.  In the TV show, there used to be a nationwide chain of video rental stores, but all of them went bankrupt.  Stevie here is hanging on to one of the last surviving movies that still has the Rose Video label.  I wonder what the late fees are for that? 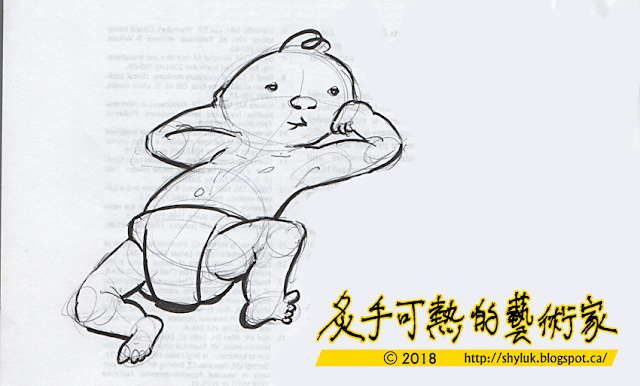 I've been busy!  So much so that I haven't been able to post to JSVB very much.  Also, I haven't been making any ungood art.  Yet today is the thirteenth of the month and that makes today Ungood Art Day.

My wife found this baby sketch in her files.  It looks like something out of 1999 or 2000.  Probably, it would have been a better drawing if I had looked at a real baby sometime in that decade.

In my previous JSVB Post, I mentioned the historic Boudin Bakery on Fishermen's Wharf in San Francisco.  Boudin is especially famous for their excellent sourdough bread.

It's a large facility, more of a factory than most bakeries I have seen.  The centerpiece is a gigantic bread-making robot the size of a semi truck and trailer.  Boudin started simply in 1849 with a recipe and deep knowledge of French baking.  The Boudin sourdough mother has been in use continuously since then.

With almost unprecedented stupidity, I inquired if Boudin sold their starter.  They laughed.  It would be like asking Batman for the keys to the Batmobile.

AS it is, sourdough starter is only slightly less complicated than the Batmobile.  There is a delicate balance between the wild yeast Candida milleri and the bacteria Lactobactillus sanfranscisensis that preserves acidity and sugar content: it turns out these two constituents help each other within the dough by providing symbiotic benefits.  Then there are considerations like protein and ash content in the flour and the temperature and liquid level of the dough.

So, a well-cultured mother is valuable to a bakery.  There are so many variables that if the mother were lost, a bakery could be ruined.  Re-creating a mother is akin to capturing lightning in a bottle.  In the great earthquake of 1906, the Boudin Bakery was gutted by fire.  One of the bakers managed to rescue a bucketful of the mother by risking his life in the flames.  Without this brave act, the bakery would never have been rebuilt.

Another disaster was averted in 2016 when San Francisco hosted the Superbowl and there was such a run on sourdough bread that Boudin's nearly used up all of their starter.   It took the bakery some months to recover their stock.

I discovered that Boudin has safeguards in place to protect their mother.  The main vault is in a secured area separate from the factory floor.  Then there other locations in San Francisco and California that have secondary vaults so that if disaster strikes the primary mother, there are other sister mothers that should remain safe from harm. 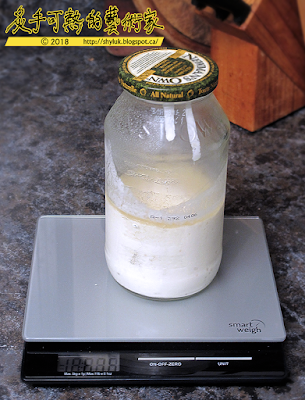 I recently inherited a new "mother": a jar of activated sourdough starter.  It's a mix of yeast, liquid, sugar, and flour.  After it's been sitting for a while, the fluidic yeast will bubble up and the carbon dioxide gas it emits sours the mix.  You use this starter as the foundation for very tasty sourdough bread!

Once started, the mother can be kept alive indefinitely.  There are some mothers that have been passed from generation to generation.  If you are a master baker, you will understand the relationship bacteria have with the yeast in the mother, and you will be able to tweak the growth of the mixture to reach optimum flavour.   Possibly the best of all sourdough comes from the world-famous Boudin Bakery in San Francisco.  Their mother has been in use since 1849!

The mother I've obtained has been alive for fifteen years, so it's relatively young.  In the picture above, you can see liquid pooled on top: this is an indicator that the starter is ready to go into dough.  So, I made my first sourdough bread: 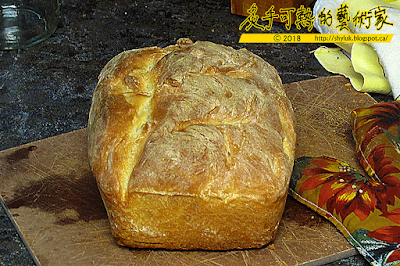 It's not pretty, but the shell is crunchy and crusty and the inside has that wonderfully tuggy texture and addictive hint of sweet-sour flavour.  This loaf didn't last long in our house!