Earlier, when I described a little about putting together "Savage Chickens On Abbey Road", I mentioned rotoscoping.  That's the art of painting over a pre-existing model.
Here are four of the chicken poses I took with a digital camera to get the models right.  I only needed poses for John and Ringo, but I have shots for all the Fab Four in fowl form.
That's my wife's hand in the shot.  Get a load of my home-made greenscreen: it's an old towel.
Cluck on this link to see the finished picture.
﻿
This JSVB Entry is by Jeff Shyluk at 7:15 PM 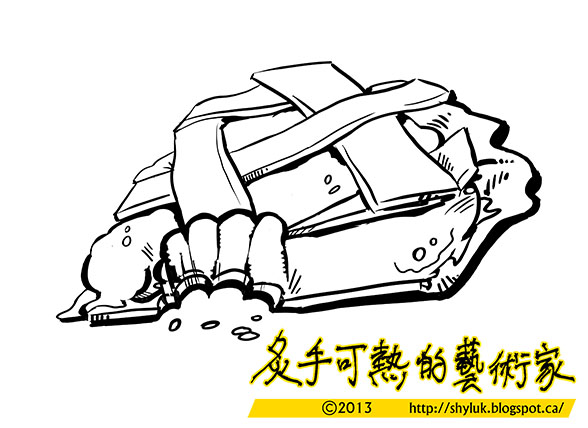 "Red Dragon" (1981) by Richard Harris is one of the more chilling books I have ever read, as well as one of the most enduring.
﻿
This JSVB Entry is by Jeff Shyluk at 11:05 PM 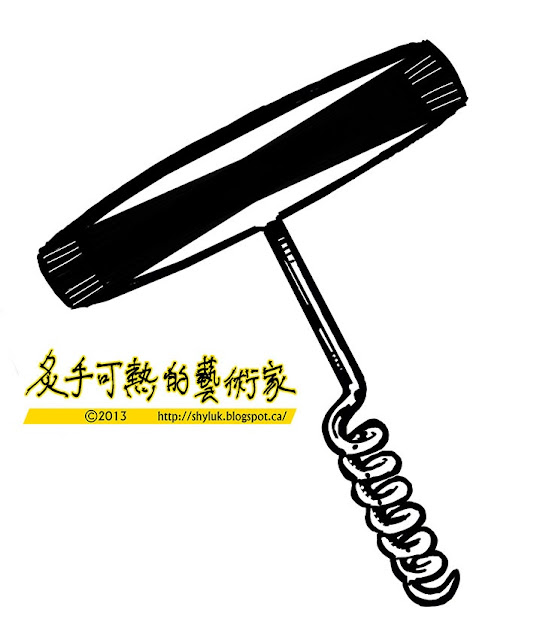 "O Twistibus, O Twistibus, a corkscrew is straight compared to thee."
-Raymond Chandler
﻿
This JSVB Entry is by Jeff Shyluk at 11:33 PM

The enigma of a partially-chewed cookie.
﻿
This JSVB Entry is by Jeff Shyluk at 11:01 PM 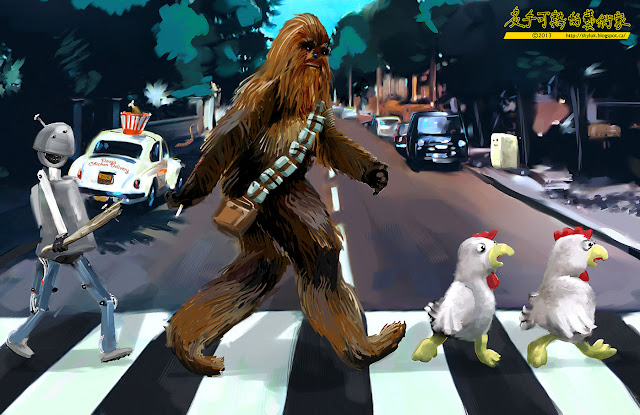 Here is more JSVB fan-art for Doug Savage's world-famous "Savage Chickens" cartoon.  I recently had the opportunity to meet Doug in person, which seemed to me the best excuse I would have to get him interested in a print.  I hope that Doug will link back here, and in doing so, perhaps his fans will also be interested in my artwork.  There is a growing collection of it here on JSVB, and much of it is for sale!   This picture in particular I don't think I can sell on account of licensing issues and all, but I would happily work on commission, or ship fine art prints of my other stuff.  My e-mail is at the top of the page.
As for Savage Chickens on Abbey Road... for many weeks, I had toyed with the idea of featuring Doug's lovable chickens in a Renaissance-style painting masterpiece.  I looked through my Uffizi Gallery catalogue to choose the right painting to replicate.  I was close to putting the chickens into The Birth Of Venus by Sandro Botticelli, when I realized where I had seen this idea before: Gary Larson had replaced La Gioconda (the famous Mona Lisa) with a cow.  For that matter, hundreds of artists have defaced or re-faced this picture.  I decided to pick a more contemporary work.  My wife, practising her ukulele music, was following the chord progressions for music by The Beatles, and in a flash of inspiration, I saw Doug Savage's chickens on Abbey Road.
"This is a masterwork, Jeff!", cries the audience.  Not so fast.  The majority of this piece was rotoscoped, painted over pre-existing elements.  It was the fastest way to work and also maintain the basics of the original Iain Macmillan photograph.  Abbey Road is a picture that music fans and conspiracy theorists have pored over in almost infinite detail.  Rotoscoping allowed me the oppotunity to preserve some of this:
For other JSVB Savage Chickens fan art, please cluck here.
For a picture of my wife's ukulele, please click here.

The Savage Chickens characters appear on JSVB due the kind permission of Doug Savage.  Chewbacca is the intellectual property of the Walt Disney Corporation.
﻿
This JSVB Entry is by Jeff Shyluk at 12:32 PM

Email ThisBlogThis!Share to TwitterShare to FacebookShare to Pinterest
Categories: Brush Line and Inker, Geekdom Come, Jeff's Life (As We Know It), Long Winded 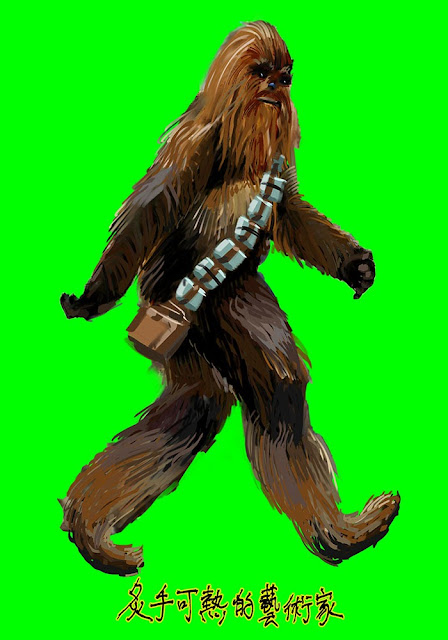 The mighty Chewbacca, as rendered by me.  If you think you know where I am going with this project, you'd likely be around 75% wrong.
Chewbacca is very difficult to draw.  Even so, a quick search of the Internet shows up a great deal of Chewie artwork, much of it incredibly good.  I suppose artists see the big Wookiee as a challenge.  Some of the works surpass the movies, making Chewbacca seem more alive than he was in Star Wars (1977), and that's an achievement by my reckoning.
Someday, when I learn more about rendering hair and fur, I'd like to take another try at Chewbacca.  For now, this will do.  If the pose looks familiar, it's because I traced off of Frame 352 of the famous Patterson-Gimlin Sasquatch film, and then drew Chewie over that.
Chewbacca is the intellectual property of - wait for it - the Walt Disney Corporation.  What a world!
﻿
This JSVB Entry is by Jeff Shyluk at 11:13 PM 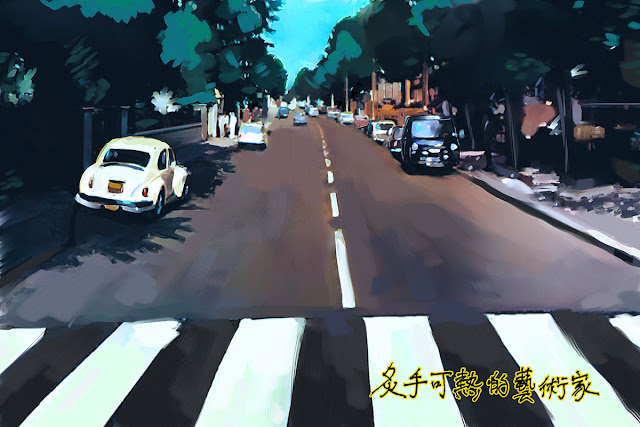 The other day, I found a fascinating picture on the Internet.  Somebody had taken the trouble to scan the famous "Abbey Road" album cover by the Beatles (1969), and then use Photoshop to blip out the Beatles themselves.  The work was crude but effective.  It would be a snap to use Photoshop to put anything in you wanted!
For the project I have in mind I wanted a more artistic effect, so I rotoscoped the image by painting over it.  There are a million possibilities!
The original photograph was part of a set taken by Iain Macmillan.
﻿
This JSVB Entry is by Jeff Shyluk at 2:52 PM 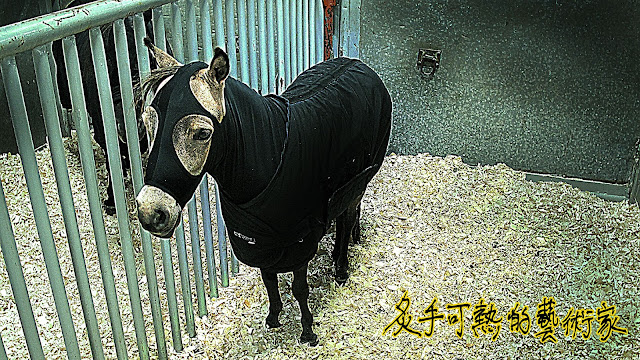 The criminal henchman, reeking of his own sweat, caught red-handed with his burlap bag of ill-gotten swag, stammered at the black apparition that had waylaid his getaway:

As far as I am aware, comic book artist Bob Kane never supplied a backstory for his iconic Bat-Man character, who starts off as a violent, angry punch-'em-up vigilante dressed in a cowl, cape, and tights.  It wasn't until the 1980's, when in an effort to reinvigorate the Batman franchise after the campy 1960's-era television series, that Bruce Wayne, the heir to a massive industrial fortune, made the bizarre transformation from helpless orphan to indomitable winged crime fighter.  We see more detail of this event through the Christopher Nolan Batman Trilogy films.

Even so, the re-boot missed several key events that shaped the life of the junior Wayne scion.  Several sources agree that Bruce Wayne wanted to fight crime partly because of the philanthropic work of his parents, but also to relieve the trauma of their violent deaths.  In addition, Bruce decided on the form of a bat for his superhero costume because of a timely exposure to bats.  However, the connection between the timid bat and the indestructible crime fighter was still missing.  Put simply, the world's bat population may be known for a lot of things: flying, biting, and making guano, but they are not known for their unwavering sense of justice and moral outrage.

Enter Batpony, Bruce Wayne's beloved Shetland Miniature Horse.  Batpony was too short to appear in most comic book frames, so he is often overlooked by fans, even experts.  Even if you step-search through the Batman movies, you will certainly see that Batpony's legs are so tiny that he never appears in a single shot.  Even so, he is there.  Like a very stubby bat in the night, Batpony would do whatever it took to care for and protect his young master, Bruce.  Hopelessly devoted, single-minded in his demeanor, and possessed of only a very slow canter, Batpony nevertheless took up the fight against malignant crime that was choking out the bright future of Gotham City.

Batpony, from below the edge of the bottom of the frame, tackled with legendary arch-villains such as The Snake, Shorty Shortheimer, Pronewoman, and the treacherous Wagonrider Gang, a collection of villains who terrorized the very knees of Gotham from the very low vantage of their souped-up Radio Flyers.

Only when Bruce was finally old enough, strong enough, and most importantly, tall enough to take on the mantle of protecting Gotham City could dear Batpony retire in total secrecy to 1936 Sullivan Place, New Troy, Metropolis USA. 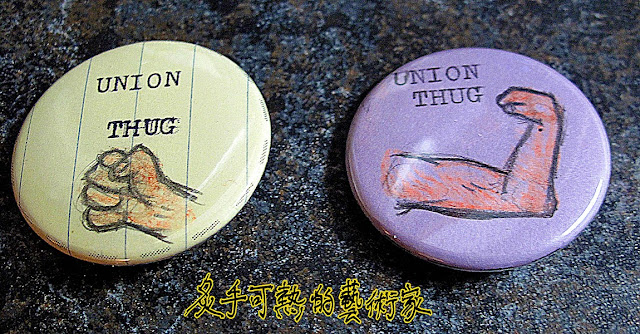 For your consideration on Ungood Art Day:  two hand-made "Union Thug" badges.
Ungood Art day appears on JSVB on the 13th day of every month.  We look at and hopefully celebrate art projects I created that have for whatever reason gone hopelessly south.
﻿
This JSVB Entry is by Jeff Shyluk at 3:38 PM 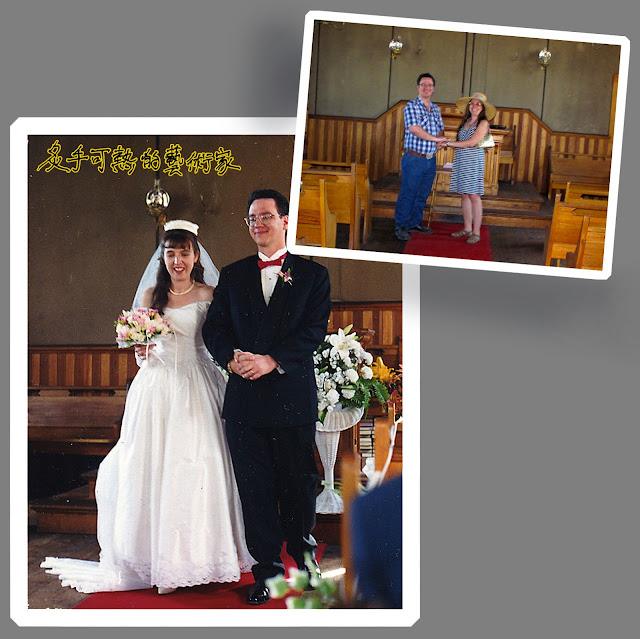 Fifteen years after the fact, my wife and I made the pilgrimage to the little mountain chapel where were were married.  It may sound like cliché, but here's the photographs to show what it was like.
Amazing that we were that thin, that young.  Fifteen years goes by in the interval of a knowing nod and a sigh, a very happy sigh.
﻿
This JSVB Entry is by Jeff Shyluk at 1:08 PM 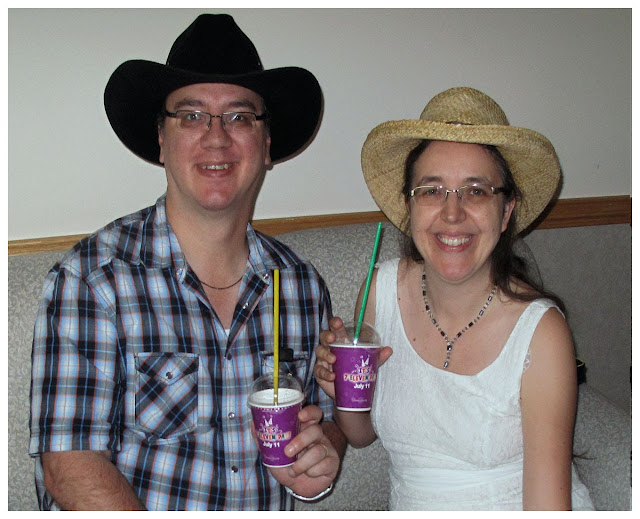 My wife and I feature souvenir cups from July 11th, otherwise known as 7-Eleven Day in Canada.  By design, July 11th is also our wedding anniversary, number fifteen in fact.
We spent the day in and around Calgary for the famous Stampede, which explains the dude duds. 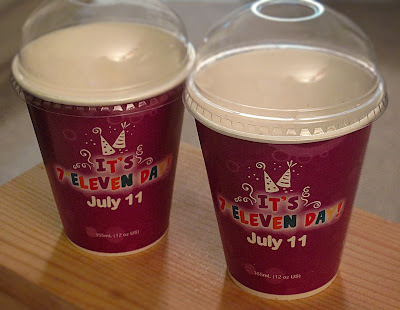 If you are curious, please click here to see the same pose from this date a couple of years ago.
﻿
﻿
This JSVB Entry is by Jeff Shyluk at 7:11 PM 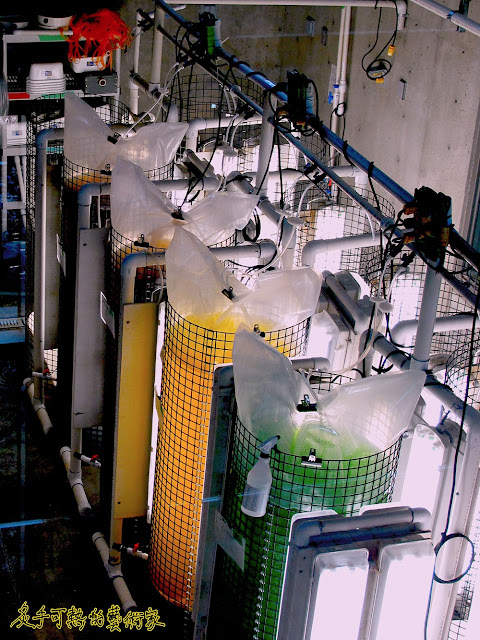 ﻿
Two floors beneath a prestigious local culinary academy is where they keep these human cloning vats.  The process is simple:  throw a blastulae crispulus into the substrate, induce  a low-variation plasma pulse, and then cook it with everyday ordinary fluorescent lights until breakout phase (not shown).
The substrates are colour-coded for ease of identification.  Yellow means just pure substrate, red or brown indicates that a human is in the process of being cloned.  Green indicates experimental DNA, my guess is NTE (non-terrestrial entity), but my tour guide was tight-lipped on that subject when questioned.  The small red taps on the bottom of each vat are fail-safe drains in case the cloning goes out of control.  I've heard that a squirt or two of household ammonia is enough to completely disrupt the process, which what I surmise the bottle hanging off the green vat is for:  a final solution.  Either that or to keep the observation window clean.
Please click here and here to see related topics.
This JSVB Entry is by Jeff Shyluk at 2:22 PM 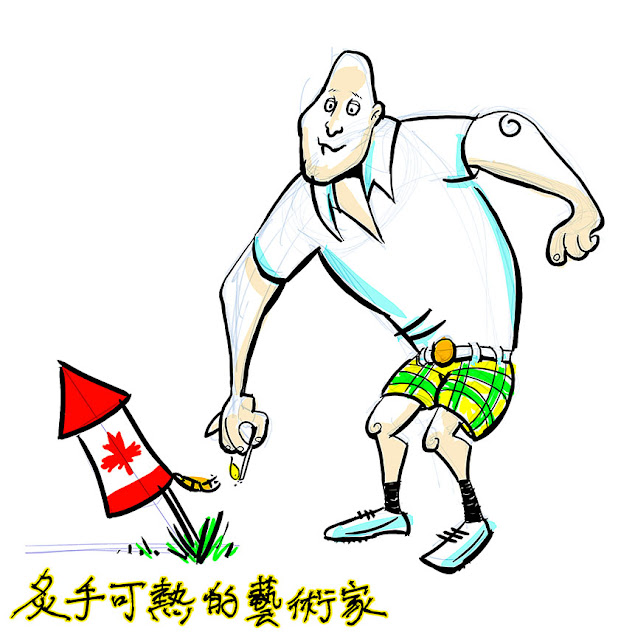 Greg Moore, Mayor of Port Coquitlam, was on hand for Canada Day celebrations.  I drew a quick caricature of him lighting off the official Canada Day fireworks.  Port Coquitlam has one of the largest professional fireworks diplays for the Lower Mainland, sited in beautiful Citadel Park.

Unfortunately, the Mayor doesn't get to light the fireworks himself, although one would think that would be a natural perk for the position.  All the explosives are handled in a safe manner by trained experts.