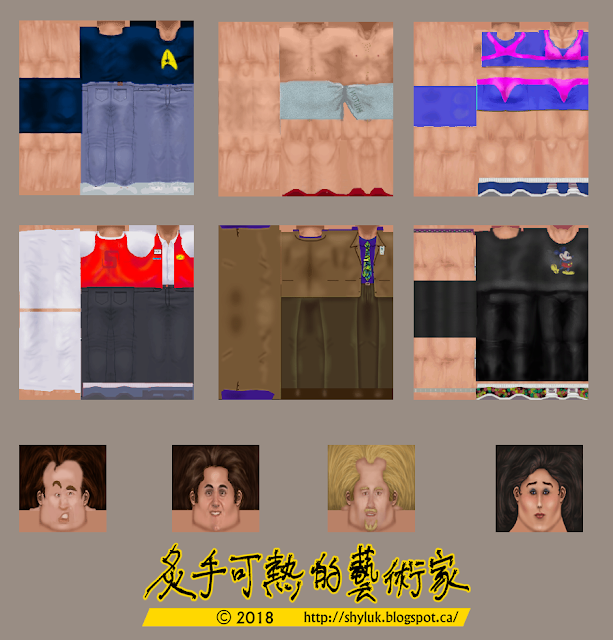 Cleaning out his office space, my friend Earl discovered a twenty-year-old disk labelled "Bleak House" with texture files that I had made for customized characters in the old Sims videogame.  Each picture is a flat image designed to wrap around a specific three dimensional digital model.  He sent me this file out of nostalgia.

The Sims was a virtual dollhouse that allowed you to create or re-create people and move them into buildings of your own design.  In his younger days, Earl lived in a ramshackle old house with his room-mates and friends Ron, Allan, and Carrie.  Earl nicknamed the place "The Bleak House Of Blahs."

One rule of The Sims was that efficiency made the little virtual people happy and inefficiency did not, since their time was very limited and travel across the house to get from the bedroom to the bathroom, and then across the house again to get to the kitchen and so on, would cause them to squander their day's opportunities.  One of the rules of the Bleak House was that you had to traverse the house across multiple floors to get to a bathroom, or around several corners to get into the kitchen, and that the bedrooms were set out as far away from each other as possible. It even had a wildly improbable "Pittsburgh Potty", a freestanding toilet at the end of an open hallway - upstairs. The place had an interesting architecture, that was for sure.  And it was incredibly inefficient, so it had earned the name "Bleak House" by makings its residents miserable with having to navigate its corkscrew corridors and dead-end lavatories.

Naturally, making a virtual Bleak House for myself was a priority, and I spent many dishonourable hours  running Sim Earl, Allan, Ron, and Carrie through the wringer of destiny.  As karma would have it, I lost all of my files maybe twenty years ago.  And then the other day Earl rediscovered them, hooray!

Sim Earl wore jeans and a Star Trek shirt.  His face was frozen with angry perplexity.  Sim Ron had immaculate groomed hair and never removed his cherry-red supermarket bag-boy uniform.  Blond Sim Allan was forever immortalized wearing nothing but a laundry-greyed towel and fuzzy maroon slippers (one day I had to run an errand out to the Bleak House, and Allan answered the door in this get-up: he would have had to run down switchbacked stairs, sail across the kitchen, dodge past the phone cubby, and accelerate along the main hallway and through the portico to get to the door to see me.)  At least back then he had his hair.  Beautiful Sim Carrie was a strong fitness enthusiast.  In fact, she was simply strong.  I elected to have her wear her electric pink and blue leotard.

As a bonus, we have mildly ambitious me in my 1990's suit, and my svelte wife in tights and a Mickey Mouse shirt.  Why my wife and I have no heads, I am not sure and I don't recall.

The Sims (and their original character templates) are the intellectual property of Electronic Arts, while Star Trek imagery belongs to Paramount Pictures (a subsidiary of Viacom) and Mickey Mouse of course is beholden to Disney.