This JSVB post has a recipe for Roast Koala Bear In Fisherman's Friend Sauce.  If the idea or the imagery of this offends you, do not scroll down.
Ask anybody who knows me well enough and they will tell you that I have mentioned that I would like to eat a koala bear.  Especially during cold and flu season, koala meat would be outstanding.  Think about the only thing a koala eats: eucalyptus leaves.  Then think about what goes into cough syrup.
I once came across the wilderness adventure story of a big game hunter who at the turn of the 19th century, became lost in the Australian outback.  To avoid starvation, he captured, cooked, and ate a koala bear (which is not a bear at all but a marsupial, and closer to a wombat than a grizzly).  He reported in his journal that the meal tasted like every throat lozenge he had ever eaten in his lifetime, except all at once.
Killing koalas is illegal in Australia, as far as I know.  There don't seem to be any recipes for them, even if they happened to be road-kill or harvested after dying of old age or great sex.  I've had to adapt from what I know from "The Joy Of Cooking" by Irma Rombauer and Marion Rombauer Decker.
ROAST KOALA IN FISHERMAN'S FRIEND SAUCE 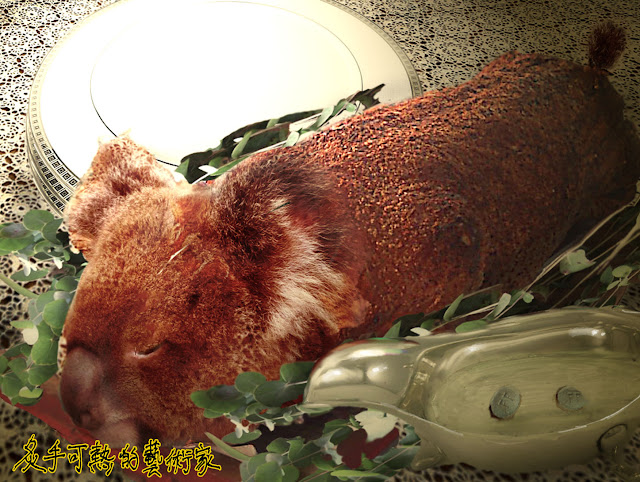 1 small koala (5-7 lbs meat)
1/2 cup cider vinegar
1/4 cup honey
1/4 cup brown sugar
1/2 cup grapeseed oil
1/3 cup seasoning salt
1/4 cup dry white wine
4tb unsalted butter
4tb flour
1 cup cream
1 1/4 cup chicken broth
1 tsp lemon juice
1 tsp minced ginger
1/2 tsp horseradish paste
2 x crushed packages extra strength Fisherman's Friend lozenges (25 g per package)
2 tb anise seeds
2 oz. vodka
1/2 tsp. hot chili sauce
Skin and gut 1 koala.  Mix the oil, vinegar, honey, and brown sugar to make a marinade; coat the koala meat and wrap tightly with plastic cling wrap.  Cold-marinate for 24 hours.  Remove wrap and discard marinade.  Sprinkle salt on exposed meat.
Roast the koala in a covered pot for approximately 4 hours at 375°F.  I like to place 1/4 cup wine on the bottom of the pot before inserting the koala.  You can put the koala on a bed of peeled carrots to prevent it from touching the bottom of the roaster pan. Treat as you would pork roast.  Baste every hour with some chicken broth, making sure to reserve at least 1 cup for the sauce.
When the koala is nearly done (test for doneness with a meat thermometer, use "pork" as a guide), melt the butter in a saucepan under medium heat.  Stir in the flour to make a paste.  Slowly pour in the cream, stirring as you go.  Continue to stir and heat the mixture for five minutes.  Slowly pour in the remaining broth, stir and heat.  Stir in the crushed lozenges, ginger, lemon juice, horseradish and anise seeds.  Stir in the vodka.  Turn sauce to very low heat and allow to sit until the roast is done.  Add the chili sauce to taste.
The meat should be tender even if it is a bit dry.  It should taste and smell like cooked medicine.  When paired with the sauce, the meal will be like eating Jägermeister, with all sore throats and runny noses but a distant memory, but without the alcoholic buzz.  Probably.  Serve hot on April Fool's Day!
﻿
This JSVB Entry is by Jeff Shyluk at 1:13 PM