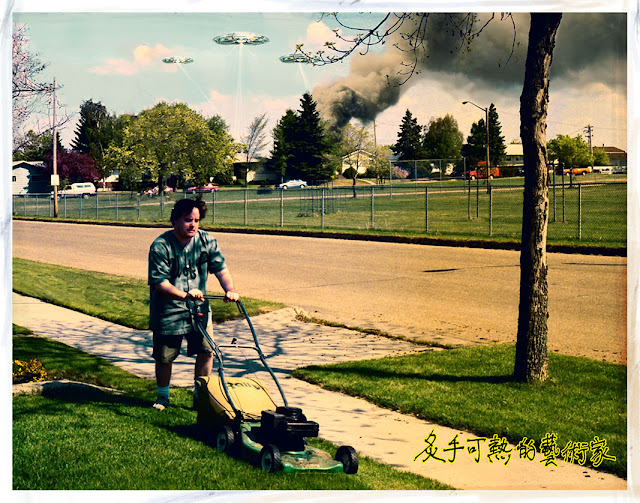 There is something about mowing the lawn that draws my mind directly to the topic of flying saucers.  It seems obvious to me on a primal level.  You're performing a dull, repetitive chore while looking directly at the ground and pushing around a very noisy machine.  There's no way you'd avoid being ambushed by a flying saucer even if it had very bright lights and a loud hyperdrive.
The photograph is of my friend Earl, presumably taken by his brother.  He was gracious enough to allow me to play around with it in Photoshop.  The biggest problem with the picture was that there was a large tree growing out of Earl's head, or at least behind him in the picture.  I needed that sky space for the UFO squadron. So, I airbrushed out the tree and fixed the elements with which it had been entangled.
I could have deleted the rightmost tree, but then there would be a lot of work fixing all of the shadows, including the ones falling across Earl.  UFO debunkers always look for suspicious shadows in pictures.
Then I added the otherworldly spacecraft and a nice column of smoke from their strafing run.  If the smoke pointed the other way, it would have matched the light source better. Keeping Earl on the smokeless side of the photo makes him more oblivious to the alien invasion, in terms of theme.
Finally, I re-cropped the picture, added the film print border, and aged the look of the picture using filters and airbrush.
Here is the original picture: 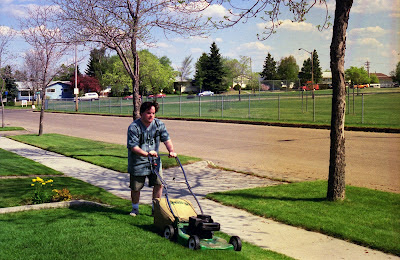 For another take on mowing the lawn underneath flying saucers, please check out JSVB Post #604 by clicking here.
﻿
This JSVB Entry is by Jeff Shyluk at 7:37 PM